This article has been withdrawn by the authors. The article received negative feedback from the readers. The authors wish the NovaSure system to be beyond dispute of advertising and hereby request retraction of this paper. The authors state that there is no conflict of interest related to the article, and the successful outcome after frequent hospital admissions are the main reasons behind the presentation of the studied case as case report.

Heavy menstrual bleeding (HMB) or menorrhagia is the most common form of dysfunctional uterine bleeding (DUB). In spite of medical treatment for DUB, many women will eventually require a hysterectomy, which is an invasive treatment option. NovaSure ablation offers a same day non-invasive alternative to hysterectomy and hysteroscopic ablation. A 38-year-old woman presented with HMB in 2015. The attacks of HMB interrupted her lifestyle, and she refused to continue with medical treatment, which failed to resolve her symptoms. This patient was admitted to the hospital four times over 2015 due to the anemia caused by the DUB. Medroxyprogesterone acetate and oral contraceptive pills failed to control the patient’s bleeding episodes. Hysteroscopic examination of the uterine cavity showed a normal cavity, and the endometrial biopsy showed proliferative endometrium. She was counseled about NovaSure ablation as the last treatment option before hysterectomy. The NovaSure ablation procedure took 90 s, and the patient was discharged from the hospital 6 h after the procedure. At follow-up, the patient is completely amenorrheic, and she is satisfied with her results. This study demonstrated that NovaSure endometrial ablation is a safe, effective, non-invasive alternative to hysteroscopic endometrial ablation for treatment of DUB.

In spite of medical treatment for DUB, many women will eventually require a hysterectomy, which is an invasive treatment option[3]. Hysteroscopic endometrial ablation, and recently NovaSure endometrial ablation were developed as non-invasive treatment options for DUB after failed medical treatment[4]. Compared to hysteroscopic techniques which require proper visualization, and a skilled surgeon, NovaSure ablation technique does not require proper visualization, is less dependent on the surgeon's skills, and eliminates the risk of fluid overload[5].

We present a case report of a relatively young woman who has suffered from DUB for many years and has had frequent hospital admissions and absences from work due to this condition. This woman was successfully treated with NovaSure ablation and she has remained symptom free for more than one and half year after undergoing this proecdeure and has been able to resume her usual daily activities and lifestyle practices.

A 38-year-old woman with a history of two cesarean sections presented with HMB with symptoms persisting for one year. She was complaining that the bleeding episodes interrupted her work and lifestyle. She refused to continue medical treatment options, which had failed to resolve her symptoms. The patient had normal thyroid function, normal liver functions, normal coagulation, and bleeding profiles. Her post-menstrual transvaginal scan to exclude intrauterine lesions (fibroids or polyps), showed a normal uterus (8-10 cm length), without any intrauterine lesions and normal ovaries. The patient had normal Pap smear, normal hysteroscopic evaluation of the uterine cavity, and the endometrial biopsy taken 3 months prior that showed disordered proliferative endometrium. The patient was admitted to the hospital four times over the course of a year due to anemia caused by the attacks of HMB.

During her first admission, her hemoglobin was 9 gms/dL. She received medical treatment for menorrhagia in of medroxyprogesterone acetate 10 mg daily for 10 days each month for 3 months with tranexamic acid (anti-fibrinolysis) 1-1.5 g 3 times/day, and parenteral iron was used to correct the patient's anemia[6].

In her second admission, her hemoglobin was 9.5 gms/dL. She received medical treatment of oral contraceptive pills twice daily for 7 days, followed by 1 pill/day after reduction of the menstrual flow for the rest of the cycle for 3 months with tranexamic acid, and parenteral iron was used to correct the patient’s anemia[6].

During the third admission, the patient received a blood transfusion (hemoglobin was 7 gms/dL). She was counseled about diagnostic hysteroscopy under general anesthesia for evaluation of the uterine cavity with an endometrial biopsy, and insertion of a levonorgestrel intra-uterine device (IUD)[6].

The hysteroscopic evaluation showed a normal uterine size, without any gross intrauterine lesions as fibroids or polyps, and the histological examination of the endometrial biopsy taken during hysteroscopy showed disordered proliferative endometrium [Figure 1].

Figure 1. Hysteroscopic examination of the uterus of the patient prior to ablation

In addition, the patient was counseled on the possibility of NovaSure endometrial ablation if the Levonorgestrel IUD failed to control the bleeding episodes, because she had normal size uterine cavity, without intrauterine lesions, and a disordered proliferative endometrium [Figure 1].

The patient was admitted again two months after insertion of the Levonorgestrel IUD due to heavy attack of menorrhagia with expulsion of the Levonorgestrel IUD. During the last admission, she received parenteral iron for anemia. She decided to proceed with NovaSure ablation. Informed consent was obtained including risks for future pregnancies following NovaSure ablation, and the risks of the ablation procedure (thermal injury, perforation, infection), and post-operative side effects (cramps, discharge, and spotting).

Third, the radiofrequency power is generated for ablation of the endometrium and during the ablation technique, the uterine cavity impedance is monitored by the generator to ensure cavity integrity and to avoid uterine perforation[8].

Hysteroscopic examination of the uterine cavity after NovSure endometrial ablation is not mandatory. It was performed in this case in order to counsel the patient about the expected results after the ablation procedure. The hysteroscopic examination performed after NovaSure ablation showed complete ablation of the endometrium [Figures 5 and 6; Video 1], and the patient was counseled that she should expect complete amenorrhea after the procedure. The ablation procedure took 90 s without any intra-operative or postoperative complications. The patient was discharged from the hospital 6 h after the procedure on non-steroidal anti-inflammatory (as analgesics). 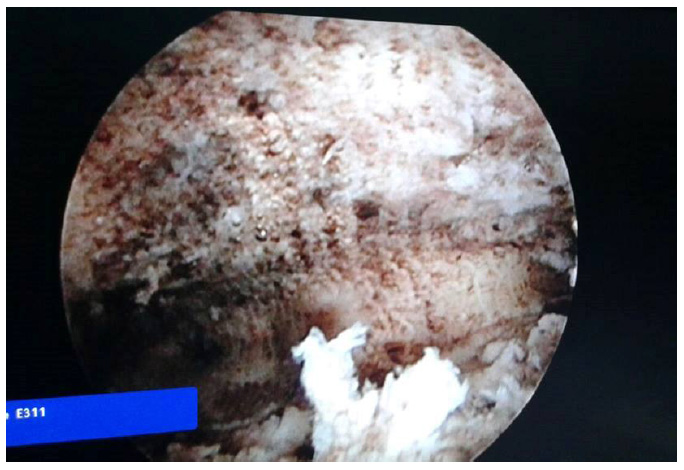 Figure 5. Hysteroscopic examination of the uterus after NovaSure ablation (near view) 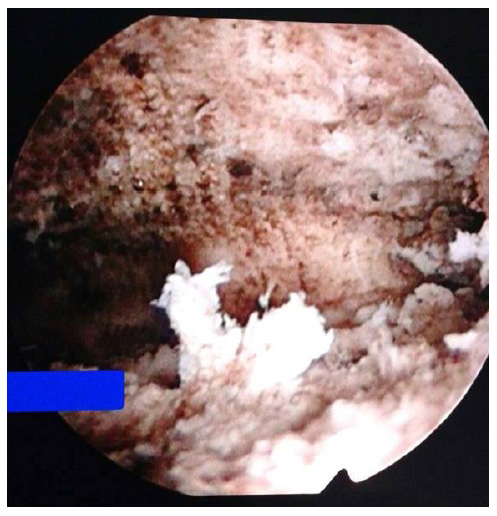 NovaSure is a second generation non-invasive endometrial ablation procedure that is completed in less than 3 min (100-120 s), and was approved by the FDA in 2001[8]. NovaSure endometrial ablation is indicated for women with DUB after exclusion of endocrine or coagulation disorders, gross uterine cavity pathology (uterine polyps or fibroids), active genital, or pelvic infection[8]. Second generation ablation techniques are quick, safe procedures, that do not require fluid media, and are less dependent on the surgeon's skills[9].

Prior systematic reviews of this technique concluded that the second generation ablation techniques were less time consuming compared to the first generation techniques, and can performed under local anesthesia with similar success[3,4].

Gallinat[9] concluded that long-term clinical results demonstrate that the NovaSure system is a safe and effective method for treatment of DUB in 107 women studied, with a high success rate, and low re-treatment rates.

Gallinat and Nugen[10] reported that NovaSure is a safe, effective treatment option in DUB after failed medical treatment. In addition; the authors reported 98% successful reduction in the bleeding attacks with 58.6% amenorrhea rate at 12-month follow-up in 107 women with menorrhagia.

Kalkat and Cartmill[11] studied 50 women with menorrhagia unresponsive to medical management, who were treated by endometrial ablation under local anesthesia. The authors reported a 94% (47/50) improvement in the menstrual bleeding, with 86% (43/50) and 94% (47/50) satisfaction rate after 4 and 6 months of the NovaSure ablation, respectively.

NovaSure is a safe, non-invasive procedure, with minimal post-operative adverse events including: pelvic cramps, nausea and/or vomiting, hematometra, urinary tract infection. Endometritis after NovaSure ablation is uncommon, and with a report range of 0.6% to 5% in clinical studies[14].

In this case report, the patient was admitted to the hospital four times over a one year period due to anemia from bleeding episodes. The anemia was corrected by parenteral iron three times, and a blood transfusion once. The medical treatment (medroxyprogesterone acetate, oral contraceptive pills), and Levonorgestrel IUD failed to control her bleeding epsidoes. NovSure endometrial ablation performed for the patient, followed by hysteroscopic examination of the uterine cavity after NovSure ablation (which is not mandatory). The hysteroscopic examination performed after NovaSure ablation showed complete ablation of the endometrium, and the patient was counseled to anticipate complete amenorrhea after the procedure. At follow up, the patient is completely amenorrheic and she resumed her work and daily activity. She is completely satisfied, after one year of suffering from frequent hospital admissions, and absence from work, because of the heavy bleeding attacks.

Post-procedure patient’s counselling based on the hysteroscopic examination after NovaSure ablation, and the successful outcome after frequent hospital admissions are the main reasons behind the presentation of the studied case as case report.

Authors are grateful to the patient presented in this study for allowing her case to be presented.

Patient’s follow up, writing the manuscript, updating the references, and final revision before publication: AbuFaza M

Writing the manuscript and revisions before publication: Farag RH

The presentation is funded by the authors themselves.

Approved by the departmental meeting of the Obstetrics and Gynecology Department of Ahmadi hospital, Kuwait Oil Company (KOC), Ahmadi, Kuwait.