A skill degradation in laparoscopic surgery after a long absence: assessment based on nephrectomy case

7Department of Urology, The University of Tokyo, Tokyo 1138654, Japan.

Methods: Using the Japanese Diagnosis Procedure Combination database from April 2010 to March 2012, data for patients undergoing laparoscopic nephrectomy and nephroureterectomy for malignancy were collected. To regulate the hospital volume effect, the hospitals included in the study were limited to those with hospital volumes of 12-24 per year. Laparoscopic time was assessed by multivariate linear regression analysis including interval days, age, gender, comorbidity, oncological stage, nephrectomy or nephroureterectomy, hospital academic status, and hospital volume.

Conclusion: Absence intervals of ≤ 15 days can slightly lengthen the operation time, which suggest the existence of mild degree of a skill-degradation effect in laparoscopic surgery.

To improve and maintain surgical skill, practice repetition is necessary. Several papers have documented the existence of a learning curve and hospital volume effect in laparoscopic surgery. The learning curve represents the theory that performance level improves reliably practice by practice, while the hospital volume effect reflects the theory that operative outcomes are inversely related to procedure volume[1,2].

While both theories support the notion that frequent and repeated exposure to clinical surgery improves skill, the idea of a forgetting curve, a counterpart to these theories, is rarely mentioned. When opportunity for practice is limited, degradation of skill would progress in an inverse manner to the learning curve. Thus, we questioned whether laparoscopic skill decays after a long absence from laparoscopic surgery.

In a real clinical setting, surgery does not occur regularly. For example, at a hospital with experiences of 12 laparoscopic surgeries per year, the surgery occurs about once a month on average. However, two cases could appear within 1 week, while other cases could appear after an interval of 2 or 3 months. If skill-degradation occurs within a-few-months intervals, long intervals will link to poorer outcomes, than short intervals. To the best of our knowledge, the effect of a long absence on laparoscopic surgical skill has not been evaluated.

In the present study, we tested the hypothesis that laparoscopic surgery time would become longer and longer according to increasing duration of absence, by analyzing a large number of laparoscopic nephrectomy and nephroureterectomy cases from multiple centers.

The patient data used in the present study were selected from a Japanese nationwide clinical administrative database named the Diagnosis Procedure Combination database during the fiscal years of 2010 to 2012. The database holds clinical information collected from about 1000 hospitals throughout Japan, and covers approximately 50% of all acute-care hospitalizations[3,4].

The selected patients underwent laparoscopic nephrectomy and nephroureterectomy (Japanese surgical code, K773-2) for malignancy of the kidney, pelvis, and ureter (International Classification of Diseases and Related Health Problems 10th Revision codes, C64, C65, and C66, respectively). To calculate interval of laparoscopic experience accurately, other laparoscopic surgeries which urologists potentially performed including laparoscopic adrenalectomy, pyeloplasty and prostatectomy (K754-2, K755-2, K756-2, K778-2 and K843-2) were also extracted from the database. The interval to surgery was calculated based on the date of laparoscopic nephrectomy, nephroureterectomy, adrenalectomy, pyeloplasty and prostatectomy. As surgery time itself was not included in the database, the endpoint of the study was set as the laparoscopic time which was measured by the period of pneumoperitoneum with Japanese surgical code of L008-4.

The inclusion criteria for the hospitals were annual hospital volumes for laparoscopic nephrectomy and nephroureterectomy of 12-24 cases per year for the following two reasons. First, the interval to surgery was classified into five categories: ≤ 7 days, 8-14 days, 15-28 days, 29-56 days, and ≥ 57 days. Therefore, ideal hospitals for the investigation were those in which laparoscopic nephrectomy and nephroureterectomy were performed once or twice per month on average. Second, the range of hospital volume needed to be limited to regulate the hospital volume effect, a well-known factor affecting laparoscopic skill quality. If no restrictions were placed on hospital volume in the study, the group for interval of ≤ 7 days would be mainly occupied by cases from high-volume hospitals (e.g., ≥ 50 cases per year) and the group for interval of ≥ 57 days would be filled by cases from low-volume facilities (e.g., ≤ 5 cases per year). Such a large inconsistency in hospital volume among the interval categories would lead to a wide difference in laparoscopic skills at baseline.

All procedures performed in studies involving human participants were in accordance with the ethical standards of the institutional and national research committee and with the 1964 Helsinki declaration and its later amendments or comparable ethical standards. The present study was approved by the Institutional Review Board and Ethics Committee of The University of Tokyo (No. 3501).

Because the clinical data in the database were thoroughly de-identified and the study design was a secondary analysis of administrative claims data, informed consent from individual patients was not required.

First, the interval period was defined as the duration between the current case and the last laparoscopic case in the hospital. For example, when a laparoscopic nephrectomy was performed on April 30 and the previous procedure was carried out on April 20, the interval was 10 days. Tables showing the patient background data and distribution of laparoscopic time were constructed.

Second, the relationship between interval days and laparoscopic time was illustrated by adopting a method for restricted cubic spline curves, as a technique that allows flexible descriptions of non-linear relationships among variables[5,6].

Finally, multivariable linear regression analyses for laparoscopic time were performed with interval days and other adjusting variables including age, gender, comorbidity (in the form of the Charlson comorbidity index[7]), oncological stage (according to the International Union Against Cancer[8]), type of surgery (nephrectomy or nephroureterectomy), hospital academic status, and hospital volume. The hospital clustering effect was adjusted by a general equation estimation method[9]. In the multivariable analyses, missing values for oncological stage were regulated to avoid bias caused by incomplete data. This was achieved by performing multiple imputations to replace the missing values with a set of substituted plausible values by creating five filled-in copies using a method for polytomous regressions[10].

All statistical analyses were conducted using SPSS version 23.0 (IBM SPSS, Armonk, NY) and R version 3.0.2 software (R Foundation for Statistical Computing, Vienna, Austria) with the RMS 4.0-0 package[11,12]. Univariable comparisons were analyzed by the χ2 test and Kruskal-Wallis test as appropriate. The threshold for significance was P < 0.05. 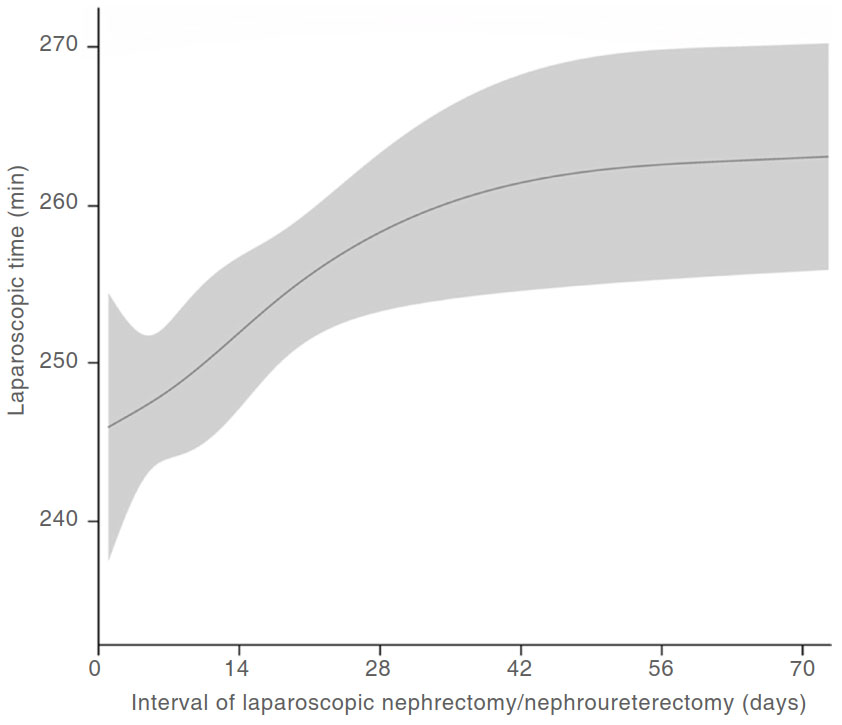 This study is the first to examine the skill-degradation effect for laparoscopic surgery by investigating the relationship between laparoscopic time and interval days of laparoscopic surgery on a real clinical basis, using nephrectomy and nephroureterectomy cases as an example. No differences in laparoscopic time were observed for intervals within 14 days, while slightly elongated time was detected for intervals longer than 15 days. Despite the interesting significant difference, an extension of 10.5-18.8 min (about 3%) in surgical time would be clinically acceptable. Thus, we can say that a skill-degradation effect after a long absence is present, but the effect size is limited and clinically acceptable.

A forgetting curve is an illustration that depicts how skill decays over time when it is not reinforced[13,14]. While a learning curve is widely acknowledged as a process of skill enhancement, the process of skill degradation known as the forgetting curve is rarely discussed in relation to clinical skill. A randomized study on novice medical students learning anesthesia described that the time required to complete tracheal intubation in a manikin using a laryngoscope worsened after 1 month in terms of complex laryngoscope devices, while traditional Macintosh laryngoscope users showed no decay in intubation time even after 1 month without further practice[15]. These findings suggested that freshly learned skills could dwindle after 1 month. As the study participants were medical students with no previous intubation experience, we consider that skill and knowledge maintenance in professionals are not discussed to the same extent as those in novices and trainers.

In the present study, the detected degradation level was mild. According to the multi-store model, memory is classified into short-term memory and long-term memory[16]. New knowledge and newly learned skills are first stored in the brain as short-term memory. With repetition of training and education and after competency of procedure and knowledge has been achieved, the memory shifts to long-term memory, which is less likely to be forgotten. The limited temporal changes observed in the present study suggest that the laparoscopic technique used as a professional skill was generally maintained at a competent level and substantially retained even after an absence of around 1 month. As other reasons, despite the long absence of a particular surgeon, the staff in an operating room usually experience frequent exposure to laparoscopic surgery performed by other surgeons in different clinical departments. The collaboration of these well-experienced staff would be helpful to compensate for a long gap in experience of an individual surgeon. Schneider et al.[17] suggested that a collaborative approach among surgeons would reduce the learning curve and improve outcomes in laparoscopic nephrectomy. Furthermore, several documents and videos useful for brushing up surgical skills are now easily available via the Internet, and these favorable multimedia educational tools can be useful to prevent a surgeon’s skill from decaying[18].

Several limitations to the present study should be mentioned. First, we should the stress the lack of individual surgeon data or actual operation-room time because of the nature of the database. The interval for a particular surgeon’s laparoscopic experience must be longer than that for a hospital. Therefore, our results were statistically robust in terms of operation intervals, and indicated that the skills of individual surgeons would be more well maintained even after a long absence. Second, the laparoscopic time we used in the present study could be affected by several clinical factors that were lacking in the database. For example, performance of lymph node dissection, transperitoneal or retroperitoneal approach, and method for bladder cuff resection (laparoscopic or open) have an impact on overall laparoscopic time. In addition, information regarding conversion to open surgery was not available. An amount of blood loss or Clavien-Dindo classification were not registered in the database, however, we believe that several types of technical difficulties would be directly reflected in elongating laparoscopic time. Third, another laparoscopic experience other than the five surgical modalities we extracted could be performed by surgeons. Based on the authors’ clinical experience in Japan, we believe urologists would rarely perform other laparoscopic surgeries, however the concern could not be completely removed.

In conclusion, regarding laparoscopic nephrectomy and nephroureterectomy, an absence interval of more than 15 days lengthened the surgery time, although the difference was slight. The present results suggest the existence of a mild degree of a laparoscopic skill- degradation retention effect in laparoscopic surgery.

Drafting of the manuscript: Sugihara T

The patient data used in the present study were selected from a Japanese nationwide clinical administrative database named the Diagnosis Procedure Combination database. Please have a contact to Prof. Yasunaga <yasunagah-tky@umin.ac.jp> for data request.

The study has been financially supported by grants from the Japanese Ministry of Health, Labour and Welfare (H29-Policy-Designated-009 and H29-ICT-Genral-004).

The authors declare that they have no conflicts of interest.

The present study was approved by the Institutional Review Board and Ethics Committee of The University of Tokyo (No. 3501).