Duplicated gallbladder with obstructive jaundice: a case report with video

A 38-year-old male presented with painful obstructive jaundice. Ultrasound showed biliary dilatation and a duplicated gallbladder (DG). Magnetic resonance cholangiopancreatography (MRCP) imaging confirmed the diagnosis of DG and raised the suspicion of a stricture in the distal common bile duct. Endoscopic retrograde cholangiogram, sphincterotomy with small stone extraction, and biliary stent placement were accomplished, and the patient was transferred to our tertiary center. Given the report of a stricture, endoscopic retrograde cholangiopancreatography (ERCP) was repeated and showed no duct narrowing or persistent choledocholithiasis, but only one cystic duct and gallbladder filled. The patient subsequently underwent laparoscopic cholecystectomy using top-down technique with complete resection of both gallbladders. Postoperatively, the patient underwent another ERCP for elevated bilirubin due ampullary edema. Subsequently, his bilirubin normalized and he was discharged home on postoperative day 5. DG is a rare anatomical finding that may be associated with choledocholithiasis and cholecystitis. In this case, a combination of radiographic, endoscopic and laparoscopic procedures was utilized to resolve the patient’s clinical problem.

Duplicated gallbladder (DG) is an uncommon anomaly of the biliary system that may complicate the diagnosis and surgical management of symptomatic cholelithiasis[1]. Medical historians disagree about the first reported case of DG. Boyden[2] attribute the first documentation to Blasius in 1675, whereas Desolneux et al.[3] and Udelsman and Sugarbaker[4] both credit a sacrificial victim of Emperor Augustus in 31 BC as the first reported case. There is consensus, however, over the uncommon incidence of this anomaly in the human population, which remains at 0.02 to 0.03 percent[2,5,6]. 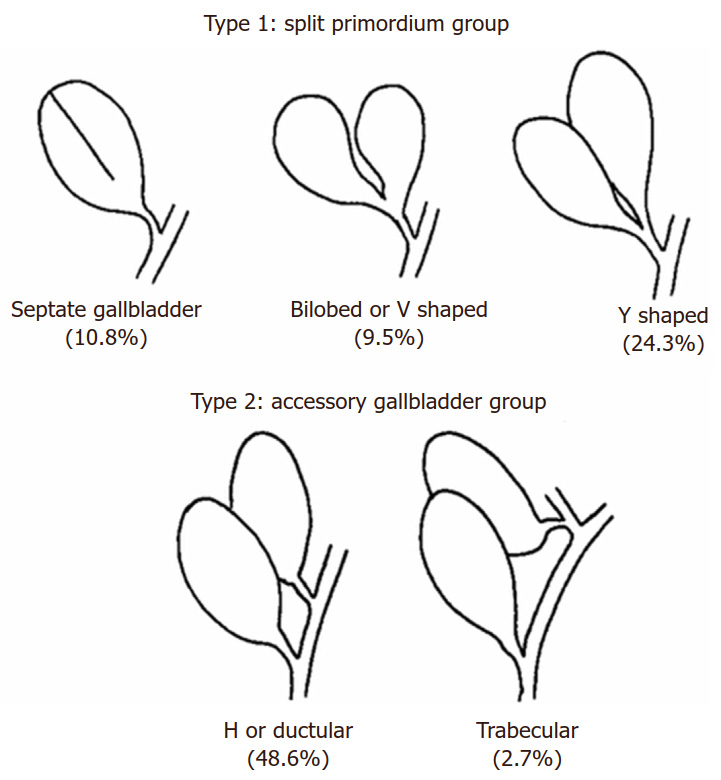 With respect to clinical presentation, DGs are not necessarily characterized by a specific set of symptoms[1,6,10]. Therefore, DG may be discovered preoperatively, during surgery, or during specimen processing[3]. Computed tomography (CT) scan, magnetic resonance cholangiopancreatography (MRCP), endoscopic retrograde cholangiopancreatography (ERCP), and percutaneous transhepatic cholangiography may all result in preoperative diagnosis that assists the surgeon in planning and conducting the operation[11]. Treatment of DG via laparoscopy has been described on multiple occasions[12]. Removal of all gallbladders is vital in preventing persistent cholecystitis and future symptomatic gallstones[3,8].

A 38-year-old male presented to his local emergency department with right upper quadrant (RUQ) abdominal pain, accompanied by nausea and vomiting. A CT scan showed two gallbladders with separate cystic ducts entering distinctly into the common bile duct. There was no evidence of cholecystitis. The patient’s pain resolved spontaneously and he was discharged home. Another episode of RUQ pain with nausea developed three months later, with radiation of the pain to his back. He also had jaundice, light-colored stools, and nausea. The patient again visited his local emergency department, where his bilirubin was 9.1 mg/dL. Subsequently, a RUQ ultrasound and MRCP verified duplicated gallbladder and now showed cholecystitis of the medial gallbladder. The common bile duct was dilated to 7.9 mm in diameter. An ERCP with sphincterotomy was performed and two tiny stones were retrieved. A biliary stent for stricture at the distal common bile duct was placed. The patient was transferred to our tertiary center for further management.

At our institution, a second ERCP was performed to further assess the common bile duct for a possible malignancy. In this study, no stricture was seen and the biliary stent was removed. Subsequently, he was taken to the operating room for laparoscopic cholecystectomy.

The operation was started by taking down omental adhesions and dissecting the peritoneum overlying the medial and lateral aspects of the gallbladders [Video 1]. Due to the extent of the inflammation and aberrant anatomy, a top-down dissection was then used to mobilize both gallbladders and confirm structures. During this dissection, the medial gallbladder was inadvertently entered. This decompressed the inflamed gallbladder and facilitated the rest of the operation. The cystic duct and artery of the lateral gallbladder were identified, isolated, doubly clipped and divided. Similarly, the cystic artery of the medial gallbladder was controlled. The medial cystic duct was the only remaining structure entering the gallbladder. Given the size of duct, it was divided using a stapler.

DG is not associated with specific symptoms or even with a predisposition for gallstone formation. As such, the condition may persist unnoticed or undiagnosed[6,9]. When symptoms do occur, gallbladder duplication may go unappreciated due to the rare nature of the anomaly or the insensitivity of diagnostic testing. Diagnosis of DG may be mistaken for more common problems such as folded gallbladder, pericholecystic fluid, gallbladder diverticulum, Phrygian cap, vascular band, or focal adenomyomatosis[9,13].

In the case reported herein, a preoperative CT scan and RUQ ultrasound suggested DG, which was confirmed with MRCP. It has been suggested that ERCP is the most accurate test in displaying the biliary tract anatomy of gallbladder duplications[14], however ERCP is not indicated for most patients with biliary colic due to its invasive nature[11]. In the present case, even though ERCP was performed for evaluation of the biliary stricture, it did not identify the medial gallbladder with an obstructed cystic duct. Therefore, we advocate consideration of cross-sectional imaging by CT or MRCP if RUQ ultrasound raises the possibility of gallbladder duplication.

For a surgeon without preoperative suspicion, certain intraoperative presentations of DG may be more difficult to recognize than others. Awareness of the variations is helpful. Septations and partial duplications with one cystic duct, complete duplications within a common peritoneal coat, and intrahepatic duplications may go unnoticed if the surgeon is not aware of the abnormalities[7]. When identified preoperatively or at operation, the literature suggest benefit to removal of all gallbladders at a single operation to prevent persistent or recurrent symptoms[3,8,15]. In addition, multiple pathologies may exist. Roeder et al.[16] reported a case of a triplicated gallbladder, where one had cholelithiasis and cholecystitis, a second had papillary adenocarcinoma, and a third was intrahepatic without disease. For these reasons, we agree a surgeon should endeavor to remove all gallbladders.

According to a growing number of case reports, cholecystectomy in the setting of gallbladder duplication may be challenging but is possible by laparoscopic approach[17-19]. Maddox and Demers[9] suggest identification of each infundibulum-cystic duct junction to permit safe laparoscopic removal. In this case, we also utilized a top-down technique via laparoscopy to verify the anatomy and safely remove both gallbladders. Laparoscopic visualization was helpful in recognizing the anatomy.

If gallbladder duplication is missed by preoperative and intraoperative assessments, persistent or future biliary symptoms are possible. In this setting, a high degree of suspicion for persistent duplicated gallbladder must be considered.

In conclusion, duplicated gallbladder is a rare anatomical finding that may be associated with cholelithiasis and cholecystitis. In this case, a combination of radiographic, endoscopic and laparoscopic procedures was utilized to resolve the patient’s persistent right upper quadrant pain and jaundice.

Dr. Ghaderi’s fellowship training was supported by the Foundation for Surgical Fellowships.

The video was presented at American College of Surgeon Clinical Congress, Washington DC, October 2013. The authors declare that there are no conflicts of interest.

The report was done with patient consent.

No ethics approval was needed. 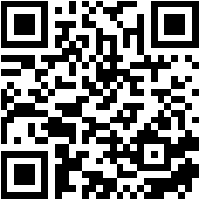