Repeat thermal ablation for local progression of lung tumours: how safe and efficacious is it?

2School of Medicine, The University of Queensland, Brisbane, QLD 4006, Australia.

Aim: To retrospectively evaluate the safety and efficacy of repeat thermal ablation for local progression of lung tumours after prior ablation(s).

Methods: From December 2009 to March 2017, 13 patients underwent repeat ablation (11 repeat microwave ablations and 2 repeat radiofrequency ablations) of a lung tumour (9 non-small cell lung carcinomas, 3 metastatic colorectal adenocarcinomas, 1 metastatic pelvic sarcoma) for local progression after prior ablation(s). Safety of the procedure was assessed by presence or absence of adverse events. Efficacy of the procedure was assessed by local tumour response to ablation and survival time.

Results: Repeat ablation procedures were safe, without major adverse events. Median length of hospital stay was 2 days (interquartile range 1-2). Pneumothorax was the most common complication [5 (38%) of 13 repeat ablation procedures]. There was one death within 30 days of ablation, but the cause of death and its relation to the procedure were unknown. Of the 12 patients with imaging follow-up [median follow-up 26 months (range 3-62)], 10 (83%) had complete ablation and 2 (17%) had local progression. Of all 13 patients, 8 (62%) were alive and 5 (38%) had died with a median overall survival of 43 months (95% confidence interval 36-49 months).

CT-guided thermal ablation has developed in the last 20 years as a minimally invasive management option for pulmonary malignancies, both primary and secondary, in patients who are non-surgical candidates[1]. Radiofrequency ablation (RFA), an electric current-based heating technique, has been the most evaluated method[2]. Microwave ablation (MWA), which uses an electromagnetic field around the ablation device to create heat, is a more updated technique with theoretical advantages in terms of lesser susceptibility to heat-sink effect, larger ablations, more uniform ablation zones, and shorter procedural times[2,3]. Ablation failure and subsequent local tumour progression remain an issue for both methods, with tumour diameter greater than 3 cm, proximity to a large vessel and insufficient ablative margin being risk factors for failure[2,4]. There are limited data on the role of repeat ablation for local progression of lung tumours after prior ablation, and with most data on repeat RFA[5-7]. This retrospective cross-sectional study aimed to evaluate the safety and efficacy of repeat MWA and RFA, in locally progressing lung tumours after prior ablation(s) at a large tertiary hospital.

Ethics approval for this study was obtained from the Hospital Institutional Review Board (HREC/14/QRBW/553). Patients were identified using the radiology thermal ablation database at our large tertiary hospital. Data were collected retrospectively through systematic review of patient charts and imaging. Inclusion criteria were consecutive patients who underwent repeat percutaneous CT-guided thermal ablation of a lung tumour for local progression after prior ablation(s) between December 2009 and March 2017. There were no exclusion criteria for this study. Repeat ablation was defined as the most recent ablation procedure, after prior ablation(s). All lesions were referred for ablation if patients are medically inoperable or refuse surgery. Patients were informed of the risks and benefits of ablation, and all provided written informed consent for the procedure.

Ablations were performed percutaneously under CT guidance (Philips Brilliance 64, Eindhoven, The Netherlands, replaced in 2015 by Aquilion ONE, Toshiba Medical Systems, Otawara, Tochigi, Japan). Both RFA and MWA modalities were used (with MWA having replaced RFA at our institution by mid-2010). All ablations were performed by the same interventional radiologist who had more than 15 years’ experience in image-guided ablation. No prophylactic antibiotic treatment was administered. The ablation applicator was inserted under sterile conditions under CT guidance, with analgesia and sedation administered by the anaesthetic team. Parameters such as the type of applicator, number of overlapping ablations, ablation duration, and amount of energy delivered were based on individual tumour size, location and tumour characteristics. Patients received a chest X-ray 3 h post-procedure to assess for post-procedural complications, and in all MWA cases, a limited non-contrast CT scan of the ablated site was performed 24 h post-procedure. Technically successful ablation was defined as completed planned ablation cycle(s) and circumferential perilesional ground-glass opacity. Patients were requested to have serial repeat CT scanning at 3, 6 and 12 months post-ablation and 6 monthly scans thereafter to evaluate treatment outcome. An FDG-PET scan was also requested at 6 months post-ablation.

Safety of the procedure was assessed by presence or absence of adverse events. Adverse events were recorded and classified in accordance with the Common Terminology Criteria for Adverse Events version 4.03[8].

Efficacy of the procedure was assessed by local tumour response to ablation and survival time. For MWA, the limited CT scan of the ablated site 24 h post-ablation served as the baseline scan that all subsequent follow-up scans were compared against; for RFA, the immediate post-ablation scan was used. Local progression after initial ablation was defined as an increase in the size (maximum axial diameter) of the ablation zone on CT. Stability or decrease in size of the ablation zone on CT was considered complete ablation[9]. Patients were followed up until 30 Jun 2017. Patients were either alive, evidenced by a documented visit to an outpatient clinic, general practitioner or scan appointment after this date, or deceased, as recorded on the state health database. Follow-up periods were calculated from date of repeat ablation.

The characteristics of patients and treatment outcomes were summarised using frequencies and percent for categorical variables and mean [standard deviation (SD)] or median [interquartile range (IQR) and range] for continuous variables. Kaplan-Meier survival estimates were produced for overall survival. STATA 15[10] was used for analyses. 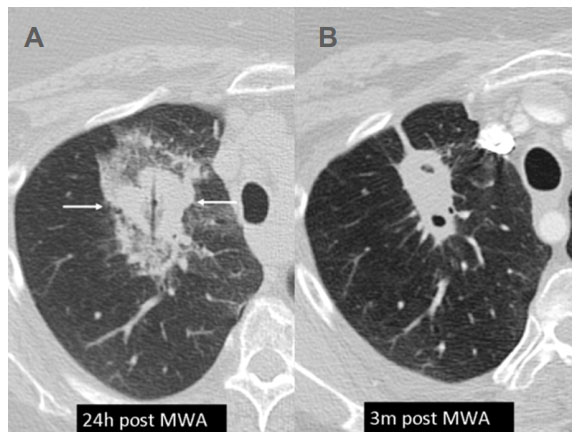 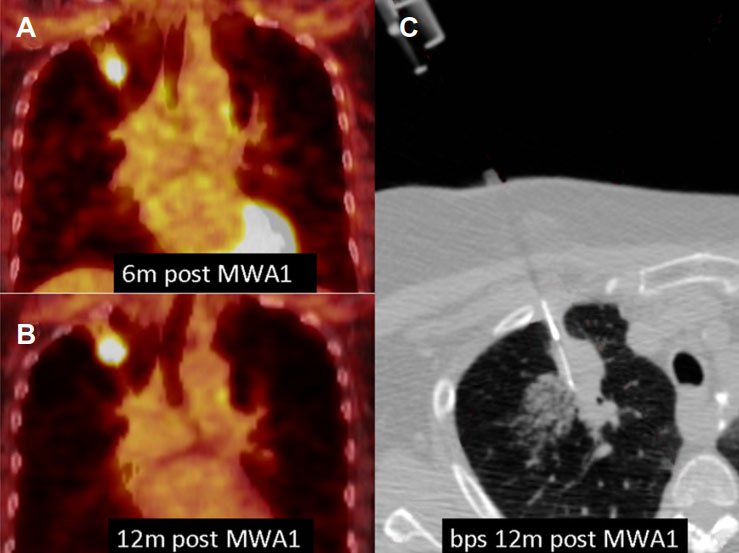 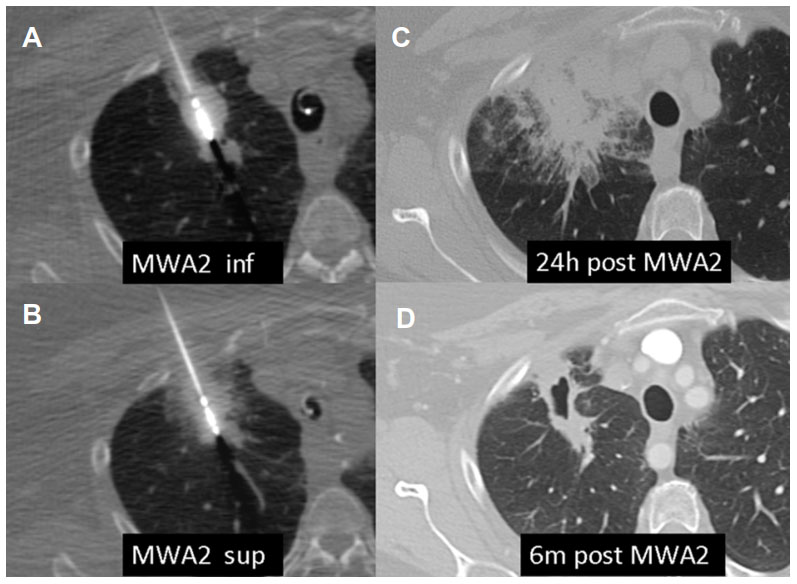 Repeat ablation procedures were generally safe, without major adverse events [Table 2]. Median length of hospital stay was 2 days (IQR 1-2, range 1-7) [Table 2]. All but 1 (8%) of the repeat ablation procedures were technically successful. One procedure was complicated by intraprocedural pneumothorax, which enlarged during the procedure, prompting a request from the anaesthetic team to abort the procedure given the patient’s comorbidities of chronic obstructive pulmonary disease on home oxygen, obstructive sleep apnoea and morbid obesity. The pneumothorax was aspirated twice during the procedure, and required chest tube insertion after the procedure, which resolved the pneumothorax. The patient subsequently had an uneventful recovery.

There were no intraprocedural deaths. Five (38%) patients experienced pneumothorax from the procedure, 3 (23%) of whom required chest tube insertion [Table 2]. There was 1 (8%) death within 30 days of the procedure (repeat ablation of metastatic pelvic sarcoma), although the cause of death and relation to the procedure were unknown. The patient had been discharged the day after an uneventful ablation procedure and died at home two days after the procedure of a sudden death during the night[11]. The presumed cause of death was pulmonary embolism or myocardial infarction, however autopsy was declined and the cause of death was not definitively determined[11].

All 3 patients with metastatic colorectal cancer were alive at the last date of follow-up [median follow-up 23 months (range 3-38)].

Local response to ablation and corresponding survival status at follow-up for all patients is summarised in Table 3.

Local tumour response to ablation and survival status at follow-up

We described the safety and efficacy of repeat ablation in a heterogeneous population of locally progressing lung tumours after prior ablation, including both primary and metastatic lesions. Repeat ablations were safe and well-tolerated, and often achieved local control despite local progression after prior technically successful ablation. Pneumothorax was the most common procedural complication, asymptomatic or manageable with chest tube insertion. Rate of pneumothorax requiring chest tube insertion (23% of procedures) was similar to that of other studies (11%-29%)[7,12-18]. Other reported complications of lung ablation include pain, post-ablation syndrome, pleural effusion, subcutaneous emphysema, pneumonia , bronchopleural fistula, pulmonary haemorrhage, haemoptysis, nerve injury and, rarely, death[7,11-18]. Our study had one 30-day post-procedural death, but the cause of death and relation to the procedure were unknown. Other studies have estimated the 30-day mortality rate after thermal ablation to be 0%-3%[12-15,19].

While surgery is the treatment of choice in early stage NSCLC, many patients are not candidates for surgery due to comorbidities[1]. Percutaneous thermal ablation is a minimally invasive alternative treatment option with minimal impact on the uninvolved lung parenchyma and overall pulmonary function[20]. Our results demonstrate that even after failed initial attempt(s) at ablation, repeat ablation can achieve local control. Only 2 of our patients experienced local progression on follow-up imaging after repeat ablation. Two-year overall survival in our NSCLC patients after repeat ablation was 100%. Yang et al.[7] recently reported repeat MWA to be a safe and effective treatment for local progression of medically inoperable stage 1 NSCLC after initial MWA, with 21 of 24 (87.5%) patients achieving local control after repeat MWA, and with median overall survival 41.5 months after first MWA, similar to those treated with single MWA and with no local progression (median overall survival 48 months) at their institution. Our results support these findings that repeat thermal ablation is a safe and effective treatment for local progression of stage 1 NSCLC after initial ablation.

Six out of 12 patients had nodal or distant metastasis on follow-up imaging, with 2 of these patients demonstrating local progression at the ablation site, suggesting systemic disease progression despite local control in the other four patients. We believe offering repeat ablation for local control is still of value, as it is a minimally invasive technique which may improve patient quality of life and prolong survival, without significant increase in morbidity.

In this study, we defined local tumour response to ablation as based on increase, stability or decrease in size of ablation zone on CT[9]. FDG-PET scan findings are more difficult to interpret, as local uptake may be due to post-treatment inflammatory changes rather than local tumour progression, and this effect may last up to 12 months after ablation[21-23]. Additionally, false positive FDG-PET scans have been reported greater than 12 months after ablation[23]. The optimal timing of FDG-PET scan after ablation is controversial and not yet defined[24]. FDG-PET is likely a useful adjunct to CT in assessing local response to ablation, as well as for diagnosis of nodal or distant metastasis. However, further research is needed in imaging criteria to determine treatment response to ablation.

This study was limited by small sample size, heterogeneity of tumour size and histology, difference of ablation systems used and retrospective assessment. Additionally, as some patients had to travel long distances for their procedure and were not followed up by the respective teams they had been admitted under for their ablations, follow-up CT and FDG-PET scans were occasionally not performed at the requested time, although local tumour response to ablation was still able to be determined based on the most recent follow-up CT. Furthermore, some patients who had nodal or distant metastasis on follow-up imaging subsequently had chemotherapy, which may have influenced local response to ablation. In the future, larger studies should evaluate the effect of tumour type, and the use of other treatments such as chemotherapy, on response to repeat ablation.

In conclusion, despite these limitations, our study demonstrates that repeat MWA or RFA in locally progressing tumours after initial ablation attempt(s) may be generally safe, well tolerated, and often achieves local control. These findings should be validated in larger prospective studies.

The authors would like to thank the Department of Nuclear Medicine at the Royal Brisbane and Women’s Hospital for their assistance with FDG-PET imaging.

Patients were identified using the radiology thermal ablation database at the Royal Brisbane and Women’s Hospital. Data were collected retrospectively through systematic review of patient charts and imaging. The de-identified data is available by contacting the corresponding author Associate Professor Karin Steinke.

Ethics approval for this study was obtained from the Royal Brisbane and Women’s Hospital Human Research Ethics Committee (HREC/14/QRBW/553).