Aim: The mental demands of laparoscopic surgery create a steep learning curve for surgical trainees. Experienced surgeons informally conduct mental training prior to starting a complex laparoscopic procedure. Reconstructing haptic feedback to mentally observe surgeon-instrument-tissue interaction is considered to be acquired only with experience. An experiment was devised to implement mental training for the haptic feedback reconstruction and its effect on laparoscopic task performance was observed.

Methods: Twenty laparoscopy novice medical students with normal/corrected visual acuity and normal hearing were randomised into two groups. Both groups were asked to apply a pre-established consistent force by means of retracting a laparoscopic grasper fixed to an electronic weight scale. Studied group underwent mental training while control group conducted a laparoscopic task as a distraction exercise. Accuracy of the task performance was measured as primary outcome. Performance between dominant and non-dominant hands was the secondary outcome.

The physical and mental demands of laparoscopic surgery create a steep learning curve for surgical trainees. A two-dimensional image of the operative field produced by laparoscope increases mental workload of the surgeon as they estimate depth in real-time. A direct surgeon-tissue interaction is lost and replaced by a surgeon-instrument-tissue interaction, posing various disadvantages in terms of haptic stimulation; moreover, the nature of laparoscopic instruments diminishes the quality of tactile feedback sensed through surgeon’s hands.

Haptic feedback is defined as a force perceived by the surgeon that acts in the direction opposite to which he or she applies traction. Tactile feedback is defined as a response which one experiences as touch and is a part of haptic feedback. The ability of the skilled surgeon to mentally reconstruct and experience tactile feedback provides a more accurate estimate of the amount of force required to apply onto human tissue during a surgical procedure. Simulating these modes of feedback during mental training is thought to reduce cerebral workload during a laparoscopic procedure, ultimately benefiting other aspects of the surgery by efficiently allocating mental capacity. This lead to the hypothesis that mental trainings could be implemented to improve mental reconstruction of haptic and tactile feedback in a surgical novice. This may aid in training and help reduce the learning curve for laparoscopic surgery.

While studying mental haptic feedback reconstruction, it was estimated that dominant hands and non-dominant hands play different roles and their influence on the task performance cannot be ignored. The dominant hand has better precision and fine motor movements. Therefore, in a laparoscopic surgery, it is traditionally used for manoeuvring instruments such as cutting hooks and needle holders. The non-dominant hand is largely involved in retraction of tissue, often to expose an area underneath. Most commonly, it is used to hold a tissue plane to assist in intracorporeal procedures such as laparoscopic suturing[1].

This pilot study aims to study the effects of mental training on a specific psychomotor skill acquired after a brief session of kinaesthetic learning.

Mental training for skill acquisition was tested using a mixed-method design. Comparisons were made between subjects who underwent mental rehearsal and those who did not. The evidence of skill acquisition between the dominant and non-dominant hands was also studied.

Twenty medical students with no prior laparoscopic experience were invited to participate in this study. Candidates were randomised into two groups; mental training and control. Both groups had equal proportions of left and right hand dominant, in addition to equal numbers of male and female participants. Each received the same introduction but candidates were not informed of their group allocation until they have done baseline assessment.

The studied group received a mental training for two minutes in the form of displayed instructions in specific order [Figure 1]. 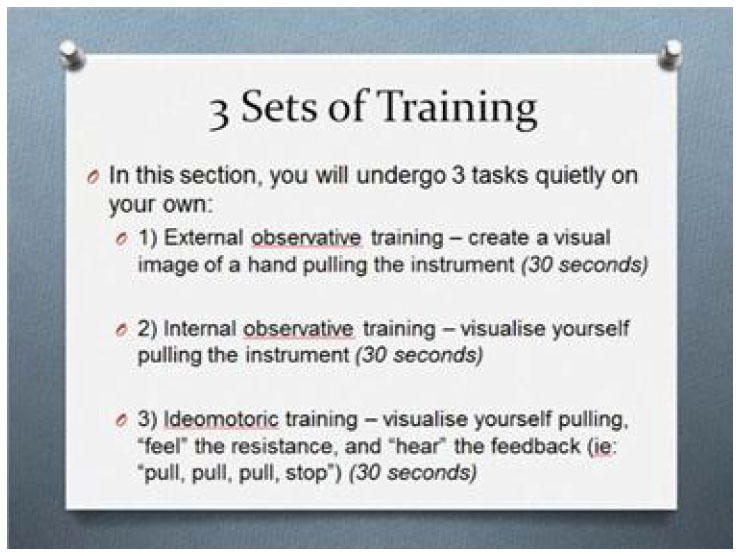 The control group underwent a simple laparoscopic distraction exercise [Figure 2]. The distraction exercise was designed to simulate realistic conditions in surgeons who do not conduct mental training. A laptop attached to an external webcam was held by the observer which displayed the working space for the candidate. Two laparoscopic graspers are pushed through neoprene with a non-working laparoscopic port situated in between (to mark the area of pin swapping, when right hand instrument touches it). The task was to transfer three paper clips from one side of the working area to the opposite side, into a plastic container. Candidates were instructed to transfer these paper clips between their two laparoscopic graspers, i.e., from right to left. The camera was controlled by the observer.

A home-made laparoscopic setup was used for task performance [Figure 3]. This consisted of a two-tier shoe rack fitted with a large neoprene sheet overlying the top tier. A 5-mm trocar is pushed through the neoprene to accommodate the 5 mm laparoscopic grasper.

The ratchet grasper (Locking) is clamped to a piece of raw neoprene 5 mm × 1 mm × 60 mm. It was modified to allow attachment to the electronic weighing scale, without compromising its elastic behaviour when pulled upon [Figure 4]. A piece of neoprene was attached to weighing scale using cable tie. Neoprene has some degree of elasticity resembling human tissue, which was the reason for the selection of this material.

Figure 4. Mouth of grasper was locked to hold the piece of neoprene

Each candidate was required to conduct a pulling action, applying a predetermined target force. The target force remained consistent in both groups and its numerical value was not disclosed to candidates. They were allowed to position themselves in their own comfortable standing. They were not in sight of the electronic weighing scale.

The electronic weighing scale in this study used measurements up to 40 kg, and poorly detected those under 0.5 kg. For the purposes of this study, the target force applied was measured in kilograms. Different human organs have different connective tissue strengths resulting in multiple target forces required to cause a tear. Although, it was beyond the scope and limitations of this study to check target forces on human tissue; nevertheless, to have a general idea about the laparoscopic pulling target force, a small-scale experiment was conducted on a pig’s gall bladder with the same electronic scale. Twenty fresh gall bladders of adult pigs were acquired to check their wall strength. It was concluded that an average maximum pulling force beyond a mass of 1.1 kg was the tearing point of the pig’s gall bladder tissue. Hence, the target force was set at 1 kg for all participants, with an upper limit of 1.1 kg and a lower limit of 0.5 kg.

Each subject went through 5 attempts of kinaesthetic training, with both hands each. It started with the dominant hand, consisted of conducting five pulling motions with verbal feedback from the observer to notify when the target force has been reached. It was decided that under-traction of tissue was more acceptable than over-traction; therefore, if target value was exceeded, participants were notified to immediately restart the pulling motion. 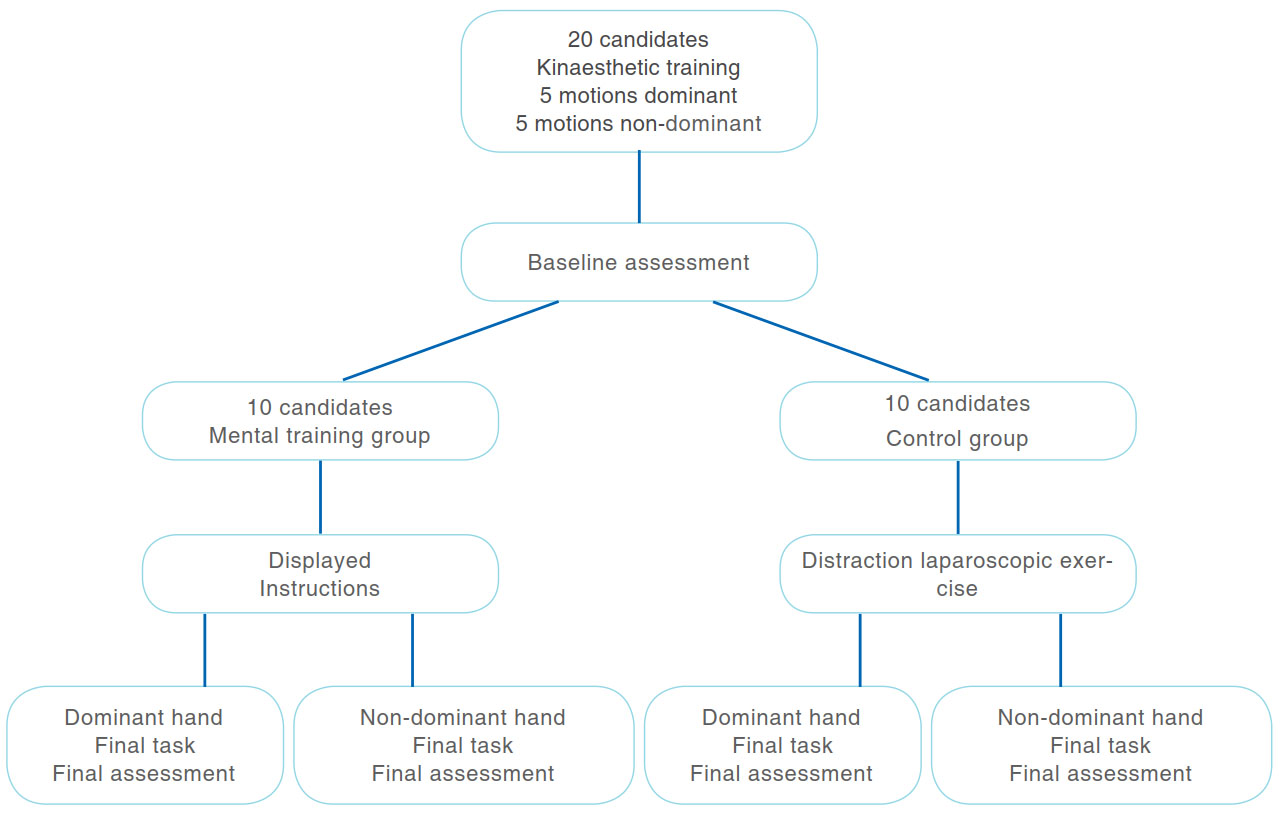 Dominant vs. non-dominant hand, baseline and final results in both groups

Mental training has been shown to affect the way the brain distributes its workload. It increases performance in athletes and is an effective adjunct to training programmes for fighter pilots. Anecdotal evidence suggests that more experienced surgeons conduct informal mental training prior to starting a laparoscopic procedure[2]. Rehearsal in the mind involves recreating the environment of the surgical field. This includes reconstructing visual, auditory, and tactile feedback as expected throughout the procedure[3]. Mental reconstruction of procedural conditions allows recollection of past experiences, which alert them to challenging areas of the operation. This instils an anticipatory attitude prior to starting the procedure[4]. Studies have noted that visual instrument-tissue interaction was easier to mentally reconstruct than tactile or haptic interactions felt when applying traction to tissue[5].

Results from this study revealed that the baseline scores for mental training group were similar to control group [Figure 6]. Candidates who conducted mental training had better precision than those who did not (0.66 ± 0.04 vs. 1.06 ± 0.14, P = 0.01 for dominant hand and 0.73 ± 0.04 vs. 1.10 ± 0.20, P = 0.04 for non-dominant hand), when compared with control group [Table 1]. Lower standard error of mean implied that the study group was more consistent in determining the target force than the control. This may be the result of a combination of conducting the mental training in addition to remembering the instructions given at the beginning of the session which encourages the participant to treat the equipment as in a real patient. 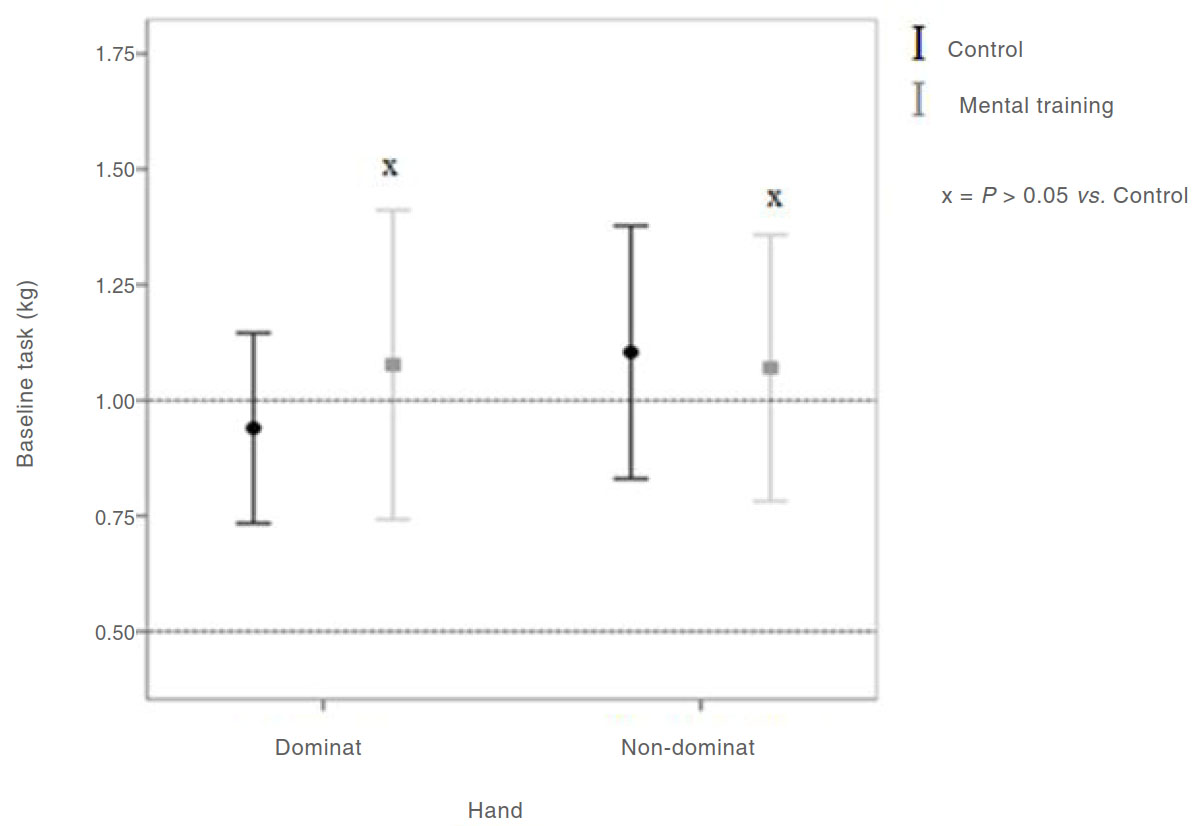 Dissimilar to control group where participants had a brief shift of focus, the mental training group heightened their vigilance against applying excessive traction. This advocated that mental training allowed candidates to evaluate their actions prior to applying the force. It also suggested that their self-evaluations were consistent, indicating that under-traction will be more likely to happen than over-traction. Inferring from the data, iatrogenic tearing of tissue is less likely to occur in the mental training group. Accuracy remained an issue in control group in the form of over traction for both dominant and non dominant hands [Figure 7]. 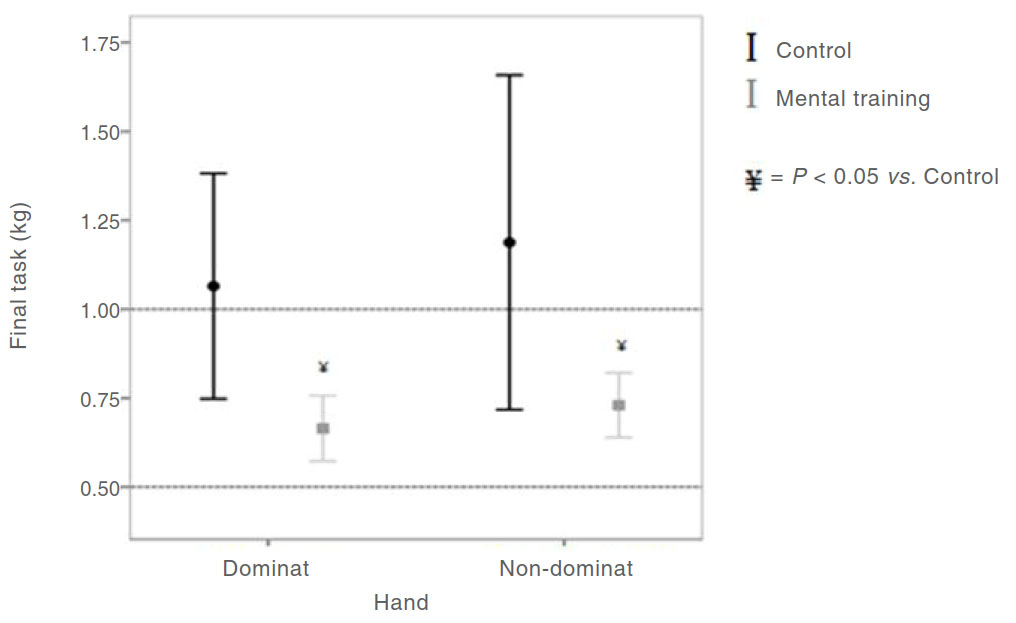 The method used to conduct this pilot study was based on simple principles of learning, training and observing the effects. Baseline and final assessments allowed an objective measure of each candidate’s performance on a general scale. The simplistic nature of the study meant that the number of variables which could affect the results and create bias were limited. Aside from the technical challenges, the main improvement to this experiment would be to utilise a blindfold to allow complete exclusion of the visual senses during training. This study also highlighted the need for future research studies to understand required pulling target force for each part of human tissue. This knowledge could potentially be translated in developing new haptic communication in laparoscopic instruments.

Manuscript editing: Riaz MK, Shariffuddin AM, Tang B, Alijani A

Data source is available with dr-riaz@doctors.org.uk in excel sheet form.

This research work was supported by facilities and laparoscopic equipment from Cuschieri skills centre, university of Dundee.

The authors declare that there are no conflicts of interest.

As per university of Dundee research guidelines, ethical approval was not required for this study. 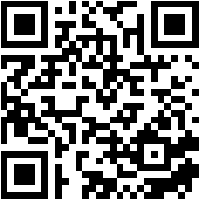