Aim: To evaluate our experience of radical treatment in management of liver hydatid cyst. As liver is considered the organ most frequently infected with hydatid disease.

Methods: We performed a retrospective study concerning surgical management of liver hydatid cyst at Advanced Hepato-Pancreateco-Biliary Center. Our study done from June 2011 to May 2018 on 103 patients presented with hepatic hydatid cyst.

Conclusion: Radical surgical procedures were safe and effective in management of hepatic hydatid cyst when it was done by experienced surgeons, with lower morbidity rates and no recurrence.

Echinococcus spp. is responsible for Hydatidosis. Accidental hosts are infected with one or more cysts in different body sites, mainly in the liver[1]. The disease is endemic in sheep rearing countries as in the Mediterranean Sea and Middle East where there is contact with infected animals[2]. During our study, we discovered increasing incidence of liver hydatid disease. And surprisingly, we get no feedback regarding animal contact in some patients. Camels were the only contact animal in other patients.

Choosing the appropriate modality for management depends on several factors: number & site of the cysts, patient general condition, type of hospital in which the surgery is performed, including the possibility of intensive postoperative care and the surgeon’s expertise[5].

Radical treatment modality focuses on near total or total hepatic adventitia resection with or without hepatic parenchyma resection associated, which avoids residual cavity[6].

Here in our study, we assess our experience in radical treatment especially total pericystectomy in management of hepatic hyatid cyst.

In this retrospective study, we analyzed 103 patients with hydatid cyst managed at the Advanced Hepato-Pancreatico Biliary Center, Zagazig University Hospitals, from June 2011 till May 2018. All data as clinical, radiological, laboratory, operative, and post-operative were recorded. Comorbidity, operative morbidity and mortality, surgical procedure, length of postoperative hospital stay were also recorded.

The diagnosis was made mainly on radiological appearance (ultrasonography was the imaging of choice). In doubtful cases we also combined radiology with serology (enzyme-linked immunosorbent assay) and Triphasic CT which was used to assess location, diameter and number of cysts. We used plain x-ray chest to identify lung hyatid cyst. Magnetic resonance cholangiopancreatography (MRCP) was performed for patients with hydatid cyst more than 5 cm in diameter, recurrent and multiple cysts to assess cysto-bilary communications. Endoscopic retrograde cholangiopancreatography (ERCP) restricted to patients presented with preoperative obstructive jaundice.

Albendazole 400 mg twice daily was prescribed for two weeks prior to surgery to inactivate the organism. During the follow up period Albendazole was given with the same doses for 3 and 6 months in complicated and recurrent cases. In cirrhotic patients we reduced the dose to 200 mg twice daily for 1 week pre-operative and for 3 months postoperative.

Surgeries were done by trained surgeons. Epidural catheter was used for postoperative pain management. J shaped incision “Makuuchi” was the chosen approach for good exposure. But, bilateral subcostal incision used in cases needed splenectomy. Complete liver mobilization, identification of the cyst (site and number), search for other associated cysts (intestine or kidney) followed by gauze towels soaked in hypertonic saline used to isolate the lesion and safeguard against the risk of spillage of cyst contents into the peritoneal cavity, were the routine steps.

In cases where the cyst was deep intra-parenchymal, we used intra-operative U/S to identify the proper site. Harmonic shears were used to achieve good haemostasis during liver parenchyma dissection. Also, in order to reduce bleeding, inflow control was done (Pringle maneuver) in some cases.

Surgical procedures were radical surgery in the form of total pericystectomy, sub-total pericystectomy and liver resection. Pericystectomy is performed with closed or open, total or sub-total method. The closed procedure was used in superficial cysts or exophytic cysts without opening the cyst. Open method was performed in deep cysts or cysts closely related to the hepatic veins or inferior vena cava (IVC). It was done by puncture of the cyst, suction of the fluid, removal of endocyst and cavity irrigation with hypertonic saline [Figure 1]. 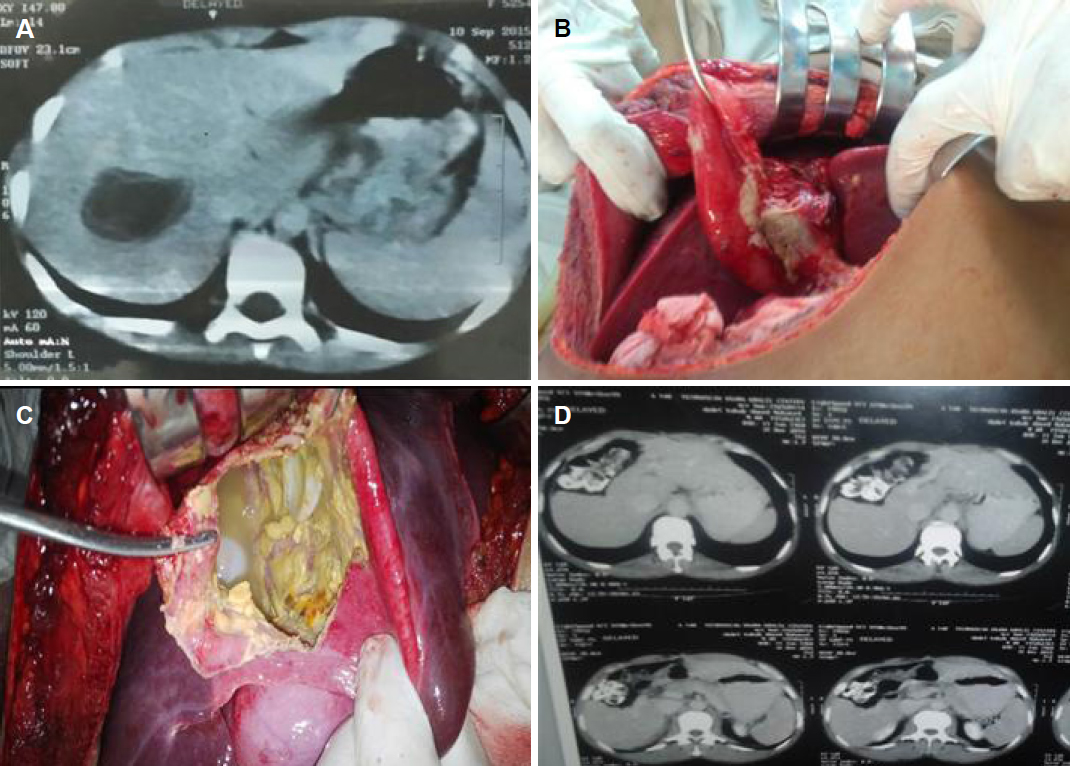 In cases of hard pericysts adherent to main vessels, especially to the IVC, we stopped dissection just before the vascular plane leaving a small part of the cyst wall (sub-total). Omentoplasty was done to prevent fluid re-accumulation and avoid recurrence.

In laparoscopic procedure, all patients were positioned in the French position and semi-left lateral position. In right side lesions, four to five ports were placed under direct visualization. A 10-mm port is placed 2-3 cm above and to the right of umbilicus for camera. Two 12-mm ports were placed about 5 cm to the left and right side of camera port and one or two 5-mm ports were placed below right and/or left costal margin for liver retraction by the assistant. In left sided lesions, the same trocars were placed in the same positions but shifted 1-2 cm to the left. Irrigation of the abdominal cavity was performed with hypertonic saline to safeguard against spillage in central cases that would underwent sub-total excision.

We sent the specimen to histopathology to confirm the diagnosis. Follow up was done at 6-60 months postoperative including physical examination, laboratory testing, ultrasonography and triphasic CT to assess the success of surgery, liver regeneration in major cases and to detect recurrence.

Characters of the hepatic hydatid cyst

We also managed recurrent cysts in 15 cases (4 M & 11 F); 7 cases with past history of US guided drainage and 8 cases with past history of conservative surgery (endocystectomy). Two patients after US guided aspiration had more than 1 cyst; 1 male patient had 3 cysts (1 huge in the peritoneum, 1 in the liver and 1 in the spleen) and 1 female with 2 cysts in the left lobe. Two females also after endocystectomy had more than 1 cyst; 1 with 3 cysts (2 of them were biliary cyst) and the other one had 2 cysts 1 in the left lobe and 1 in the right lobe [Table 2].

Twenty-one (20.39%) patients developed post-operative complications with no mortality or recurrence. Postoperative bleeding occurred in female patient after 10 h post operatively which re-explored (bleeding was from liver bed and slipped ligature from one of the varices at the splenic bed).

Four patients developed post-operative bile leaks (one of them with right hepatectomy, biloma was at the cut-surface that needed percutaneous US guided pigtail catheter drainage, removed after 2 weeks. The other 3 were managed conservatively).

1Patient had more than one complication

Hydatid disease increased in sheep raising areas[7]. The increased number of people immigrated from contaminated areas as Iraq and Syria because of war as well as dogs in the street and contamination of vegetables with dogs’ excreta, enhance the incidence of hydatid disease in our country lately.

The hydatid cyst presentation is always asymptomatic for many years, as it enlarges slowly[8]. In our series, 38 (36.89%) patients were asymptomatic at the time of diagnosis. Symptoms arise either from pressure effects on adjacent organs or when a complication occurs[9]. The sensitivity of US in liver hydatid disease diagnosis was 100%. Affection of liver lobes by Hydatid disease was more in the right lobe[10], which was matching with our patients 69 (66.99%). The cysts are more commonly solitary as was the case in 74 (71.84%) of our patients.

Total or near total pericystectomy is the chosen treatment for hepatic hydatid cyst, because it is the only management modality that treats the disease integrally with low morbidity and mortality[13]. If we don’t resect the infected adventitia well, which is known to contain exogenous vesicles, that may lead to relapse of the disease. Due to this reason radical treatment prevents residual cavity disease and thus prevents relapse[9,13]. In our study, radical procedure was done in 96.12% of the patients (liver resection in 14.59%, total pericystectomy in 77.67% and laparoscopic total pericystectomy in 4.85%). In a study of Marco et al.[6], a radical treatment was performed for 93%, and for 81% of these patients, total or near total cystectomy was done.

In addition to ordinary open surgical techniques, the laparoscopic approach has been used as a new modality for hydatid cyst treatment.

Radical hydatid cyst treatment showed better results and low risk for complications[17]. In our study, the average intra-operative bleeding was less than 600 mL, ranging from 300 mL to 2000 mL. About 31.07% of the patients required an intraoperative blood transfusion. Less than 20% of the patients required hospitalization in ICU during the first 24 h postoperatively.

The type of surgery: either conservative method (deroofing, drainage) or radical surgery (pericystectomy and hepatectomy) is the major factor for hydatid cyst recurrence[18]. Aydin et al.[19] comparative retrospective study on 242 patients described significantly higher morbidity and recurrence rates in patients managed by conservative surgery (11% vs. 3%; 24% vs. 3%). In another study by Tagliacozzo et al.[20], from 454 patients, 214 were managed with conservative surgery (external drainage, marsupialization or omentoplasty), while the remaining 240 managed with radical surgery. Morbidity and recurrence rates were significantly higher in the group that was managed conservatively. In our study no recurrence was detected during the follow up period.

Biliary leakage and fistulas are the main immediate post-operative complications after conservative procedures, beside septic complications of the residual cavity. A pericyst left in situ (especially if thick and calcified) represents two major obstacles. First, delay liver regeneration filling the residual cavity, leading to serum and blood accumulation or liver abscess formation. Second, pericyst persistence may hide possible biliary communication in the residual cavity leading to biliary fistula, which occurs in up to 50% of patients after conservative managemenet[3].

However radical procedure advantages in this particular issue allow exact detection and safe suture of biliary and vascular branches in the healthy parenchyma which definitely reduce the risk of biliary leak and blood collection. Spontaneous reduction of the residual cavity by liver regeneration would happen[21].

Albendazole may play a role to prevent recurrences after surgery using 400 mg twice daily for 3-6 months. According to the WHO, antiparasitic chemotherapy treatment is considered an important indication to prevent secondary echinococcosis and reduce the risk of recurrence. In patients who didn’t take albendazole, recurrence rate was 18.75%, compared to 4.16% recurrence rate in patients who received albendazole therapy[22]. In our study, we give the patients albendazole 400 mg twice daily for 1-2 weeks before surgery, and postoperative for 3 months in uncomplicated cases and 6 months for complicated cases.

In conclusion, pericystectomy is a safe and effective management modality for liver hydatid cyst either complicated or uncomplicated. This attributed to no mortality, less morbidity and no recurrence especially when done by experienced surgeons and specialized centers with appropriate equipment.

The authors would like to thank the Advanced Hepato-Pancreateco-Biliary Center team for their continuous support to achieve patients data. 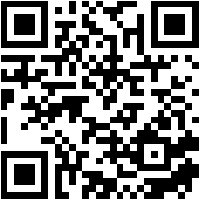