This article belongs to the Special Issue Advances in the Minimally Invasive Management of Gastric and Esophagogastric Junction Cancer
Views:1983 | Downloads:325 | Cited:

Conclusion: Laparoscopic distal gastrectomy led to a faster return to a full diet and a shorter postoperative hospital stay in our study, and it was well tolerated by elderly patients with advanced gastric cancer.

In Japan, the 2017 Annual Health, Labour and Welfare Report defined an “elderly” or older person as an individual aged 75 years or older. The average age of the population and the number of elderly patients have been increasing worldwide, particularly in developing countries[1]. Elderly patients usually have various comorbidities such as cardiovascular diseases[2,3] and decreased respiratory function, making them unsuitable for surgery. Age exceeding 70 years is an independent predictor of increased postoperative complications, in-hospital mortality, and longer hospital stays[4-6].

We identified 60 patients aged 75 years or older[12] who underwent LDG or ODG for advanced primary gastric cancer at the Department of Surgery of Bell Land General Hospital from October 2010 to October 2017. The patients were retrospectively selected from a prospectively collected database and divided into two groups based on the operative approach: the LDG group and the ODG control group.

Exclusion criteria included urgent or emergent procedures and operations other than distal gastrectomy, such as total or proximal gastrectomy. Preoperative diagnosis was made by upper endoscopy with tumor biopsy, and clinical staging was performed with abdominopelvic computed tomography. Tumors were staged according to the Japanese Classification of Gastric Carcinoma[12].

In this study, laparoscopic surgery was performed by three surgeons who were proven experts in their field as defined by the Japan Society for Endoscopic Surgery. Two of the three surgeons are experts in laparoscopic gastrectomy. The indications for LDG and ODG were the same: clinically diagnosed gastric cancer without distant metastasis and lymph node involvement in the extraperigastric area. The patients were fully informed of their diagnoses and briefed on whether they would undergo LDG or ODG. The choice of LDG or ODG was decided upon by the patient and the attending surgeon after discussing both approaches. Written informed consent was obtained from all patients before the operation.

Data on several factors, including preoperative patient baseline parameters, perioperative variables, postoperative outcomes, and pathologic results, were collected for analysis. The preoperative parameters analyzed were age, sex, body mass index (BMI), American Society of Anesthesiology (ASA) classification, previous abdominal surgery, and comorbidities, which were assessed using the Charlson Comorbidity Index (CCI)[13]. Perioperative variables analyzed included the mode of anastomosis, length of the operation, estimated blood loss, time to first oral diet, and duration of postoperative hospital stay. Postoperative outcomes included postoperative complications, 30-day mortality, and recurrences. Postoperative complications, such as anastomotic leakage and pancreatic fistula, were classified based on the Clavien-Dindo classification[14]. In addition, postoperative complications such as pneumonia and delirium, which are especially critical in elderly patients, were included in the analysis.

This study was approved by the institutional review board of the Bell Land General Hospital. The study protocol conformed to the principles set in the Declaration of Helsinki and its later amendments.

The characteristics of both groups were compared using the chi-squared and Mann-Whitney U tests. The postoperative survival was analyzed using Kaplan-Meier survival curves and compared with the log-rank test. Significance was established at P < 0.05. As the number of patients older than 75 years are low, the sample size of the present study was small. Therefore, we used non-parametric statistical methods.

Patient characteristics are shown in Table 1. There were 20 patients in the LDG group and 40 in the ODG group with mean ages of 81.0 ± 5.0 and 81.4 ± 3.9 years, respectively. No significant differences were observed in terms of sex, BMI, ASA classification, previous surgery, or CCI. Since decreased respiratory function is a major risk factor for postoperative pulmonary complications in the elderly, previous studies commonly assessed the predicted functional expiratory volume in 1 s, predicted vital capacity, or arterial oxygen saturation[16,17]. In this study, we used the Hugh-Jones classification to assess respiratory function[18], and no differences were observed between the two groups. The prevalence of comorbidity was high in both groups; only 25.0% of the patients in the LDG group (n = 5) and 15.0% of those in the ODG group (n = 6) had no preoperative comorbidity (CCI = 0).

Patient demographics of the LDG group and ODG group

Surgical and oncological outcomes of the LDG group and ODG group

Postoperative hospital stay was significantly shorter in the LDG group than in the ODG group (P < 0.001). The clinical pathway was used after gastrectomy in the hospital.

Postoperative complications in the LDG group and ODG group

Table 4 describes the pathological findings in the 2 groups. No significant differences were noted in terms of depth of invasion, nodal catalog, and pathological stage. Stage 4 disease was observed in 1 patient in the LDG group and in 6 patients in the ODG group. Curative surgery was not performed in 7 patients: 1 patient who had liver metastasis (LDG group), 4 patients who had dissemination (ODG group), and 2 patients who had liver metastases (ODG group). No significant differences were found in terms of tumor diameter, the mean number of harvested lymph nodes, and the mean number of positive lymph node metastases between the two groups.

Pathological data of the LDG group and ODG group

The LDG and ODG groups did not differ significantly in terms of the pathological stage according to the Japanese Classification of Gastric Carcinoma[12]. The median follow-up period in the LDG and ODG groups was 11.7 months (range, 0.3-54.8 months), and the 3-year overall survival was 50.1% and 41.7%, respectively (P = 0.531) [Figure 1]. 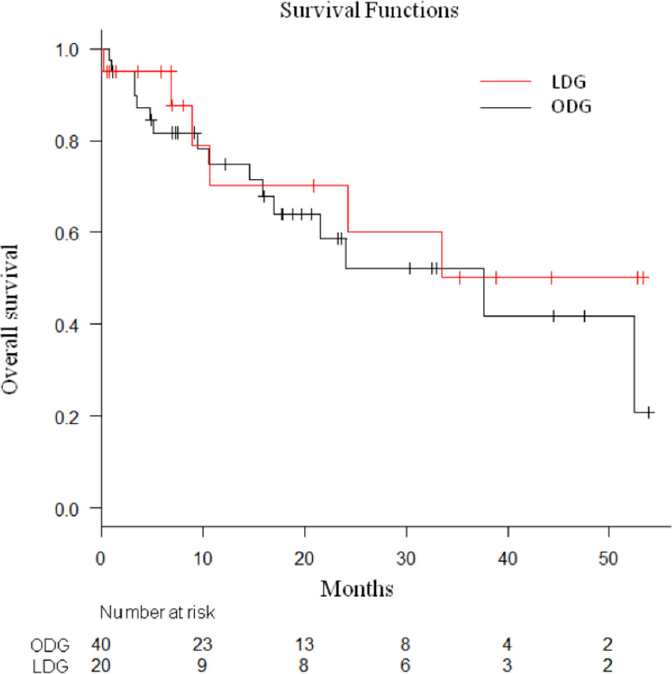 As life expectancy continues to increase, the number of elderly patients with malignancies and concomitant comorbidities has increased as well. The proportion of elderly patients among the total gastric cancer population is expected to increase gradually over the next few decades. As aging is associated with a gradual loss of reserve capacity[19], age exceeding 70 years is an independent risk factor for postoperative mortality, complications, and longer hospital stays after gastric cancer surgery[4,5].

LDG for advanced gastric cancer was shown to be more effective than open surgery in elderly patients, resulting in reduced blood loss, faster first oral diet initiation, and shorter hospital stays. Conversely, the longer operative time may lead to a higher rate of morbidity, including delirium, pneumonia, and cardiac failure. Acute cardiac failure and pneumonia are the most common minor complications of distal gastrectomy for gastric cancer. Some reports have suggested that the adverse cardiopulmonary effects of pneumoperitoneum occur only when the intra-abdominal pressure is more than 15 mmHg, while low pressures do not affect cardiopulmonary output[23-25]. Therefore, laparoscopic surgery may be safe even in high-risk patients. However, the operative time was longer in the LDG group than in the ODG group, and longer operative times are associated with postoperative delirium and pneumonia[26]. Our results revealed no significant differences in postoperative morbidities, suggesting that high-risk patients, including the elderly may be able to tolerate the prolonged laparoscopic operative times. In accordance with previous reports, laparoscopic surgery led to a faster return to a full diet and a shorter postoperative hospital stay in our study[27].

In fact, a shorter abdominal incision leads to less pain and, subsequently, earlier ambulation. Early ambulation may prevent postoperative delirium as evidenced by the findings of Schweickert et al.[28], who found a shorter duration of intensive care unit-associated delirium in patients who received physical and occupational therapy. Since postoperative pain is one cause of delirium, less pain after surgery may help prevent postoperative delirium[29]. Therefore, it is more important to reduce pain after surgery than to shorten operative time, especially in elderly patients. In addition, early ambulation prevents pneumonia resulting from atelectasis. Based on these advantages, LDG may provide superior short-term outcomes in elderly patients with advanced gastric cancer.

A 2011 report stated that the average life expectancy at 80 years in Japan had increased by 8.39 years in men and 11.36 years in women. However, Endo et al.[2] reported that the overall survival of gastric cancer patients was longer in the operation group than in the best supportive care group. The oncologic results of LDG in elderly patients have not been determined. In a study of the overall gastric cancer patient population, Hu et al.[30] reported that the cumulative 3-year overall survival rate after laparoscopy-assisted gastrectomy for advanced gastric cancer was 75.3%; in our study, it was 50.1% and 41.7% in the LDG and ODG groups, respectively, which is lower than the overall rate. This may be because elderly patients have concurrent ailments that affect prognosis and survival. Indeed, in the present study, 49 patients (81.7%) had preoperative comorbid diseases. Concurrent disease was the cause of death in 2 patients in the LDG group and in 4 patients in the ODG group. Since elderly patients are expected to have a shorter residual life span, quality of life should also be considered when choosing a surgical procedure[31,32].

The elderly patients in the ODG group were more likely to require inpatient rehabilitation due to their diminished mobility and more persistent postoperative wound pain, which seriously hamper the recovery of activities of daily living[33]. Prolonged hospitalization after surgery can lead to worse quality of life in elderly patients. Several reports have demonstrated that laparoscopic surgery leads to a faster return to a full diet and a shorter postoperative hospital stay, as shown in our own study. These data indicate that LDG may be superior to conventional open surgery in terms of the length of the hospital stay, even for advanced gastric cancer.

Our overall rate of postoperative complications was higher than that in previous studies on the overall gastric cancer patient population. Hu et al.[30] reported a postoperative complication rate of 10.2% in 1,184 patients with advanced gastric cancer. The most common major complication in the LDG group was pancreatic fistula, which tends to reflect surgical inexperience and a learning curve[34]. Pancreatic fistulas occurred in 3 patients undergoing LDG in 2010, the year we started performing D2 lymphadenectomy. As experience accumulates, the incidence rate of major pancreatic fistulas may decrease. Although the mortality rate was not significantly different between the 2 groups, 4 deaths occurred in the ODG group, suggesting that radical gastrectomy may sometimes be excessively stressful for elderly patients, especially those with advanced gastric cancer. Surgery should be performed more meticulously and quickly than usual in elderly patients. The choice of surgical procedure in elderly patients with short life expectancies must guarantee disease control as well as acceptable short- and long-term survival and quality of life[35].

Our study had some limitations inherent to retrospective and non-randomized studies, where selection and observer biases with regard to the operative approach adopted are possible. Furthermore, our study was limited by the small number of cases. Surgeons may have encouraged earlier discharge of the patients in the LDG group. A high-volume, prospective, and randomized study is needed to confirm our findings.

We are grateful to the study participants and their caregivers. The authors thank participating surgeons from the Bell Land General Hospital. We would like to thank Editage (www.editage.jp) for English language editing.

Designed the study and acquisition, analysis, and interpretation of the data: Yuu K 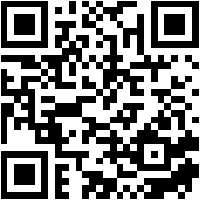