One anastomosis gastric bypass and esojejunostomy in rats: surgical techniques

One anastomosis gastric bypass (OAGB) is a popular bariatric procedure, but controversies remain regarding biliary reflux and the potential risk of cancer. Esophagojejunostomy (EJ) in rats is a validated and reproducible model for the development of metaplasia [Barett’s esophagus (BE)] and esophageal adenocarcinoma (EA) with a minimal exposure of 12 to 20 weeks. We are analyzing the risks of BE and EA in an OAGB rat model and comparing these with the EJ rat model. The purpose of this study is to describe our OAGB and EJ techniques in rats that we used to evaluate biliary reflux and share our experience with scientists and the bariatric community. These operations are short and simple procedures with acceptable morbidity.

One anastomosis gastric bypass (OAGB), or mini-gastric bypass, is a popular bariatric surgery procedure in humans[1-3], but controversies remain regarding the risks of biliary reflux and potential complications as metaplasia, dysplasia and cancer[4].

No studies on the risks of these for humans are currently available and research, including experimental studies, is needed to help answer this important question[4,5]. The risk of developing metaplasia [Barett’s esophagus (BE)] or esophageal adenocarcinoma (EA) after omega loop montage mainly exists because of studies that analyzed surgical models in rats in which the gastro-duodenal or enteral contents were placed in direct contact with the esophageal mucosa [esophagojejunostomy (EJ)][6,7]. EJ in rats is a validated and reproducible model for the development of BE and EA with a minimal exposure of 12 to 20 weeks.

We are analyzing and comparing the risk of metaplasia (BE) and/or EA in OAGB and EJ rat models with a follow-up of 30 weeks[8]. The study is currently in progress but we decided to communicate the different surgical techniques that we used to share our experience with scientists and the bariatric community.

Rats were fasted overnight before operation. Anesthesia was given by inhalation with isoflurane. Standard aseptic procedures were used throughout[9].

The rat was positioned supine, feet spread apart, abdomen shaved. After laparotomy, the lateral banks were removed with a self-retaining retractor and a suture was suspended at the xyphoid.

After retraction of the liver, the stomach was isolated [Figure 1A]. Loose gastric connections to the spleen were released along the greater curvature, and the suspensory ligament supporting the upper fundus was severed [Figure 1B]. A vicryl suture was passed behind the esophagus. Then, the gastric artery and the esophagus were separated[5,10]. 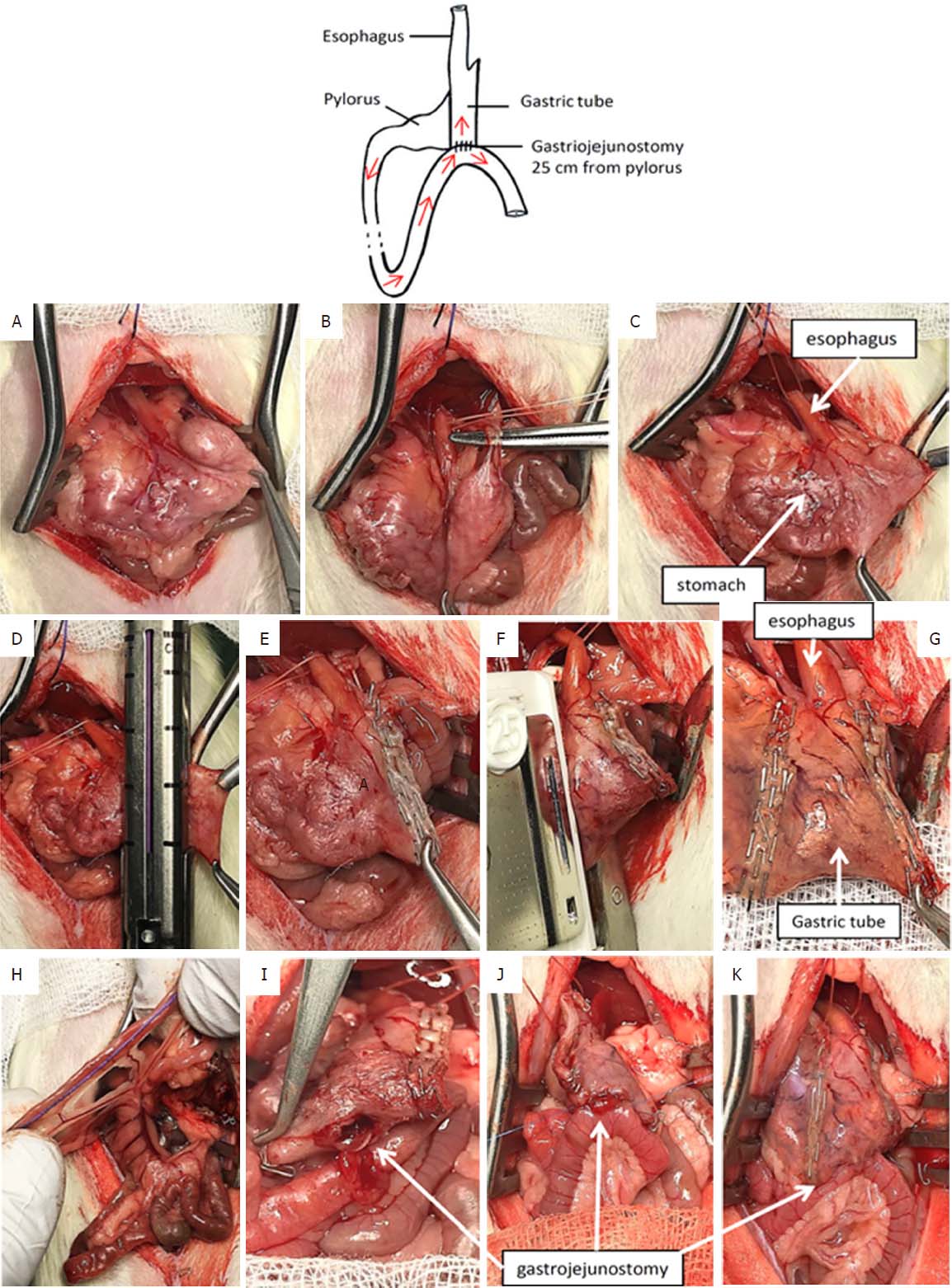 The forestomach was resected using an endo GIA 45-mm staple gun with purple cartridge (Medtronic; Figure 1C-E). The esogastric junction was then dissected and the vascular supply isolated in this region. The stapler TA-DST 30 mm-3.5 mm (Covidien) position was delimited between the esophagus and the left gastric artery using the wire previously placed positioned in a parallel line with the transection line of the forestomach, and the gastric pouch created [Figures 1F and G].

The small intestines were run distally from the pylorus for 25 cm. We recommend using a premeasured suture for this [Figure 1H]. Curved scissors were used to create a 3-mm jejunostomy on the anti-mesenteric margin of bowel. The jejunum was then anastomosed to the gastric pouch 25 cm from the pylorus [Figure 1I].

The liver was retracted and the stomach isolated. Loose gastric connections to the spleen and liver were released along the greater curvature, and the suspensory ligament supporting the upper fundus was severed. A vicryl wire was passed behind the esophagus.

Section of the esophagus

The wire behind the esophagus was placed at the base of this one. It was tied and pulled down. The esophagus was cut with a scalpel, as close to the esogastric junction as possible [Figure 2A and B]. 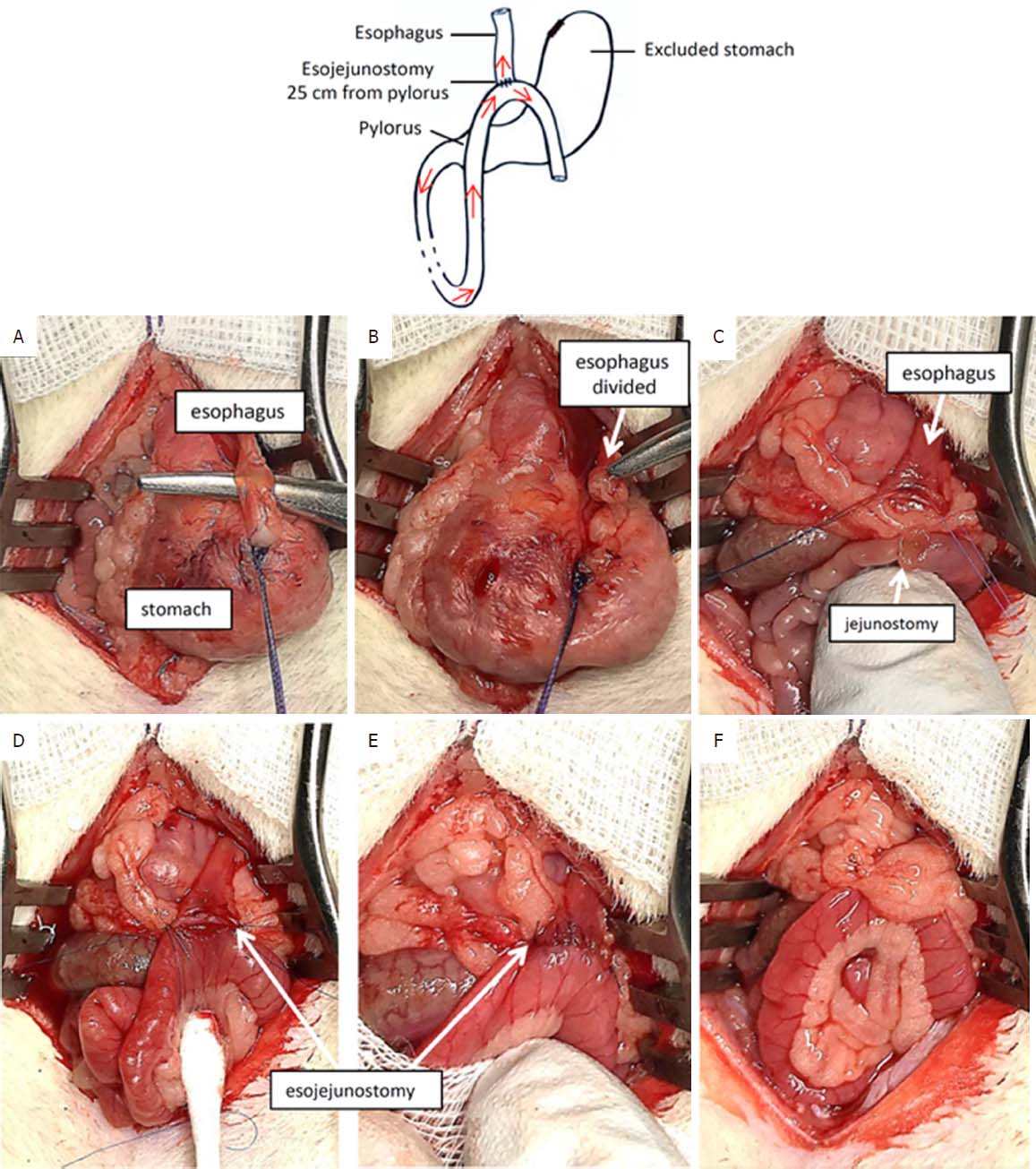 Before it was retracted, two Prolene 7/0 tractors were placed on both side of the esophagus, taking care to remove mucosa and serosa (total points). The knot of the stomach was reinforced with a running suture completed with Prolene 7.0 [Figure 2C].

The small intestines were run distally from the pylorus for 25 cm. We recommend using a premeasured wire (as described in OAGB surgeries, Figure 1H). Curved scissors were used to create a 3-mm jejunostomy on the anti-mesenteric margin of the bowel [Figure 2C].

After replacing the esojejunal block, we wrapped the anastomosis in the omentum [Figure 2F]. One milliliter of saline was poured intraperitoneally.

OAGB and EJ rats were maintained without food for 24 h after surgery. They received subcutaneous injections of 10 mL Bionolyte G5 (Baxter) on the first postoperative day (POD). From POD 2 to POD 3, they had access to a liquid diet ad libitum. Free access to a normal diet was allowed from POD 4. Pain and distress were carefully monitored twice a day with scoring. Rats showing signs of pain or not eating were maintained on antalgics and euthanized if there was no improvement after 24 h. In our experience, major morbidity in OAGB rat surgeries was due to anastomotic leakage and gastric tube necrosis and major morbidity in EJ surgeries was due to anastomotic stenosis. Gastric necrosis was due to an inadequate stapling of the left gastric artery at the level of the lesser curvature in our first surgeries. With increased experience, we improved the dissection of this artery to decrease these ischemic complications.

We operated on 40 rats: 16 with EJ surgery, 16 with OAGB, and 8 with sham surgery (laparotomy without any digestive suture). Of the 16 EJ rats, acute mortality occurred in four (25%) on mean postoperative day 6. This was due to anastomotic stenosis in all cases.

To prevent stenosis, we recommend doing the anastomosis carefully with very tiny passages on the esophageal mucosa and the jejunal serous. Second, the running suture must be tightened with low pressure. Of the 16 OAGB rats, we had 3 deaths (19%) on mean postoperative day 4. Mortality was due to anastomotic leakage in one rat and gastric pouch necrosis followed by peritonitis in two. To prevent these ischemic complications, we recommend carefully preserving the left gastric artery during TA stapling. In fact, this artery must be well dissected and isolated to avoid its stapling during the confection of the right side on the gastric tube.

Risk of cancer after OAGB and the need for experimental studies

Analysis of the prevalence of cancer and BE after EJ surgeries must be performed after sufficient esophageal exposure to bile and enteral juices, at least 12 to 20 weeks[6,7]. In our experience of OAGB surgeries, no dysplasia, metaplasia or cancer were observed after a 16-week follow-up[5]. The lack of follow-up and control group prompts us to now evaluate OAGB and its consequences using 30-week and 50-week follow-ups[8] and compare these results to EJ surgeries (control group).

On the day of sacrifices, histology and molecular analysis on esophageal and gastric mucosae can be performed to analyze the prevalence of BE and cancer[5].

Concerning the esophagus, the absence of metaplasia, dysplasia or cancer in the OAGB group compared with the EJ group will suggest confer a real protective effect of the long gastric tube used in the OAGB model. Conversely, the presence of precancerous or cancerous lesions in the esogastric blocs of OAGB rats gives additional arguments to detractors of the technique to decrease its diffusion.

This short communication is a simple contribution for researchers interested in the topic of biliary reflux after OAGB because there is an urgent need to answer this specific issue, especially for patients who have already undergone surgery.

We thank the assistance of INSERM U970, ERI in the study.

All applicable institutional and/or national guidelines for the care and use of animals were followed. All experiments were performed in compliance with the European Community guidelines and approved by the Institutional Animal Care and Use Committee. 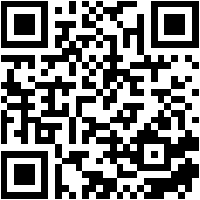