Gynaecomastia is a benign clinical condition that can occur in men of all ages, attributed by the proliferation of glandular tissue. Most patients are asymptomatic while symptoms ranging from mild discomfort to severe pain can present in patients with gynaecomastia. In addition to these, this condition may affect the psychological well-being of patients leading to a need for further treatment. Medical treatment of primary gynaecomastia in the form of anti-oestrogen therapy has not been proven to be effective and there is no consensus regarding the drug of choice or optimal duration of treatment. Surgical treatment is usually the standard treatment in primary gynaecomastia. There have been various techniques described in the literature with the aim of restoring a pleasant chest shape with limited scar on incision. Most of the techniques however involve the use of a peri-areolar or a Wise pattern incision, which can be obvious, especially in patients with a tendency to scar badly. The authors describe a novel approach, whereby a single-port endoscopic subcutaneous mastectomy using the three-dimensional endoscopic system with incision placed along the anterior axillary line was performed for a patient with gynaecomastia and thereby conferring excellent aesthetic outcomes.

Surgical techniques in gynaecomastia treatment have evolved over the years towards less invasive approaches such as liposuction[1]. However, in patients with larger amount of tissue or ptotic breast, subcutaneous mastectomy is still more effective in removing excess glandular tissue[2]. The downside to subcutaneous mastectomy are the resulting large, long and often unsightly scars[3]. Endoscopic subcutaneous mastectomy has been described in the literature[4,5] where it is commonly performed via three incisions along the mid-axillary line or a single incision in the axilla and the specimen will be morcellated and suctioned out thereafter. Single-port nipple-sparing mastectomy using three-dimensional (3D) endoscopic system in the management of breast cancer was recently reported[6] and the authors describe the advantage of enhanced 3D visualisation in the conduct of the operation, allowing precise plane recognition and dissection. In this article, the authors describe the use of single-port 3D endoscopic-assisted subcutaneous mastectomy in the management of gynaecomastia.

Preoperative markings were performed with the patient in standing and sitting position [Figures 1 and 2]. Extent of dissection was determined with comparison to the contralateral (non-gynaecomastia) side. Under general anaesthesia, patient was then placed in a supine position with ipsilateral arm abducted at 90° [Figure 3]. The ipsilateral shoulder was then elevated to 30° to facilitate access for the operation. 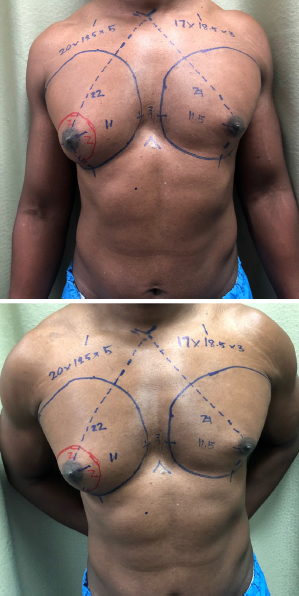 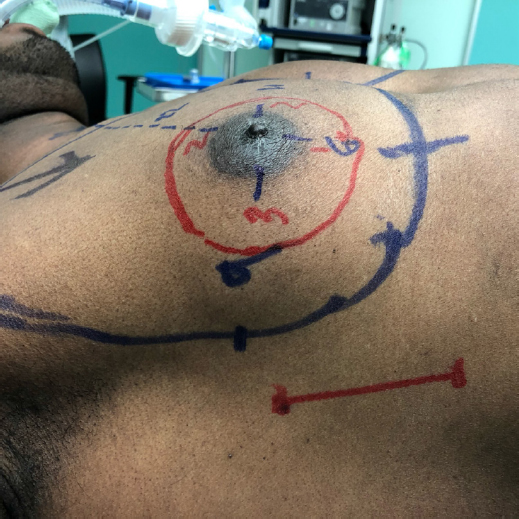 Methylene blue gel was used to mark the extent of dissection to aid in identification during subsequent endoscopic dissection. A saline solution containing lignocaine 0.05% and epinephrine 1:1,000,000 was injected subcutaneously into the whole breast to minimise bleeding.

Following that, a 3-cm incision was made over the extra-mammary region near the anterior axillary line at the level of nipple areolar complex (NAC). A working space of 4-5 cm was created by dissecting the subcutaneous flap under direct vision to allow subsequent placement of the single port. After creation of working space, subcutaneous tunnelling/blunt dissection of the anterior skin flap with Metzenbaum scissors was performed to aid in subsequent skin flap dissection. Following that, posterior dissection of breast parenchyma off pectoralis major fascia was performed under endoscopic guidance with endoscopic vein harvester [Figure 4]. Thereafter, the single port was placed with CO2 insufflation kept at a pressure of 8 mmHg. A 30° 10-mm diameter camera TIPCAM 1 S- 3D VIDEO Endoscope (KARL STORZ, Germany), 5-mm laparoscopic Metzenbaum scissors, curved (Applied Medical, USA) and 5-mm laparoscopic grasping forceps were used to conduct the operation [Figure 5]. 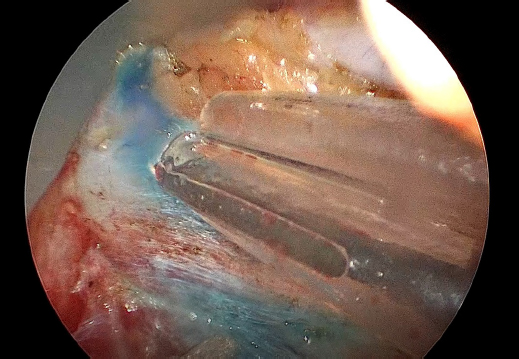 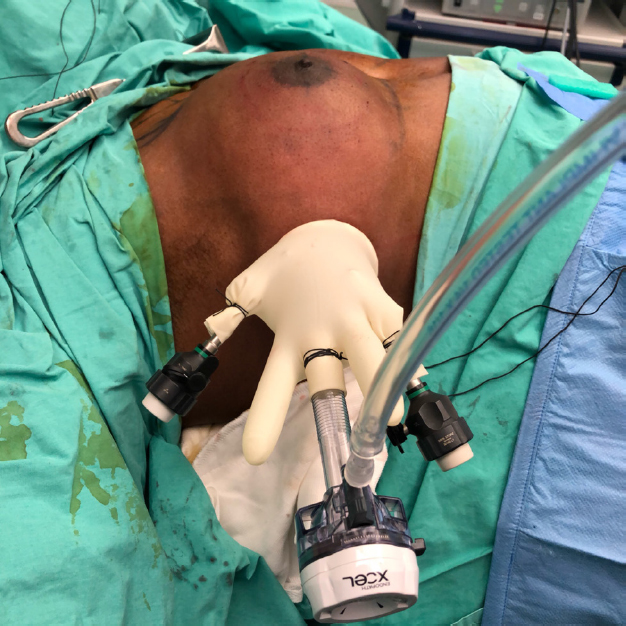 Endoscopic dissection commenced from superficial skin flaps in all quadrants with the septa between skin flap and parenchyma dissected using laparoscopic Metzenbaum scissors [Figures 6 and 7]. During skin flap dissection, a 30° upward facing 3D endoscope with reverse imaging was used to produce a clear 3D image. The angle and field of vision could be adjusted with upward, downward or reverse motion of the image by the 3D endoscope when deemed necessary. Tissue beneath the NAC were intentionally left thicker to prevent nipple retraction as well as preserve the blood supply to NAC, thereby reducing the risk of NAC necrosis [Figure 8]. With 3D visualisation, blood vessels could be clearly visualised and hence preserved [Figure 9]. After completion of superficial skin flap dissection, peripheral dissection was carried out by retracting breast tissue to create sufficient working space and extent of dissection was based on preoperative markings and intraoperative blue dye gel [Figure 10]. After the completion of dissection, the entire breast specimen was removed intact through the incision and haemostasis secured. A three-point fixation of the NAC to underlying pectoralis major fascia was then performed with absorbable stitches. A closed suction drain was placed. 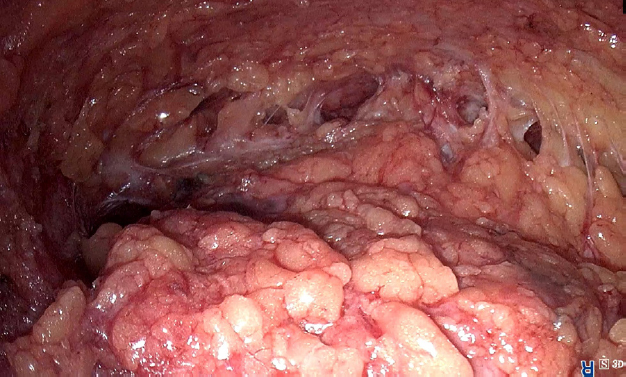 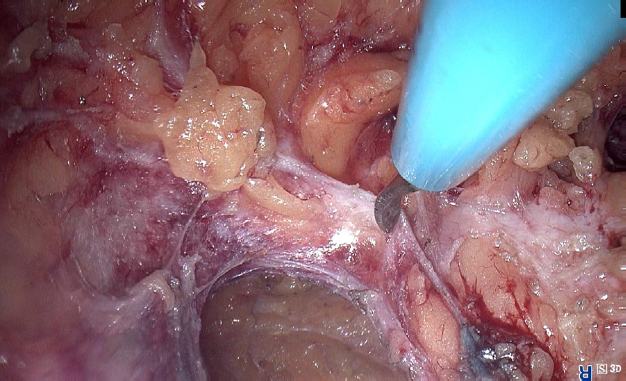 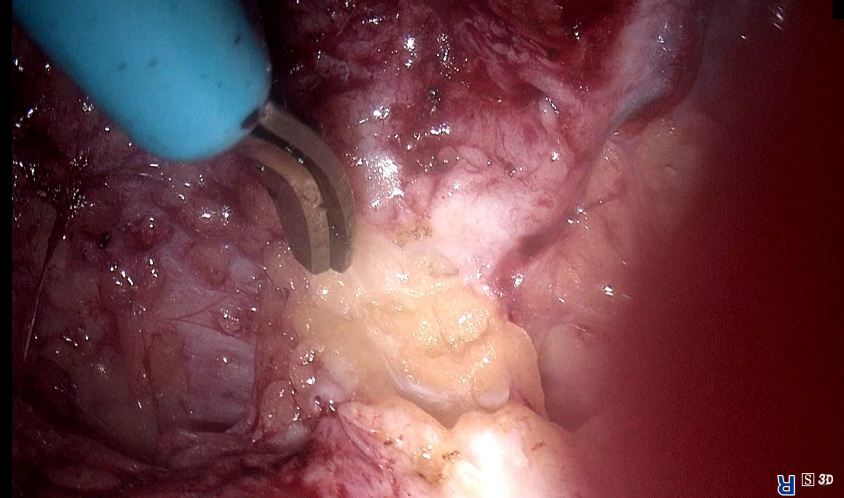 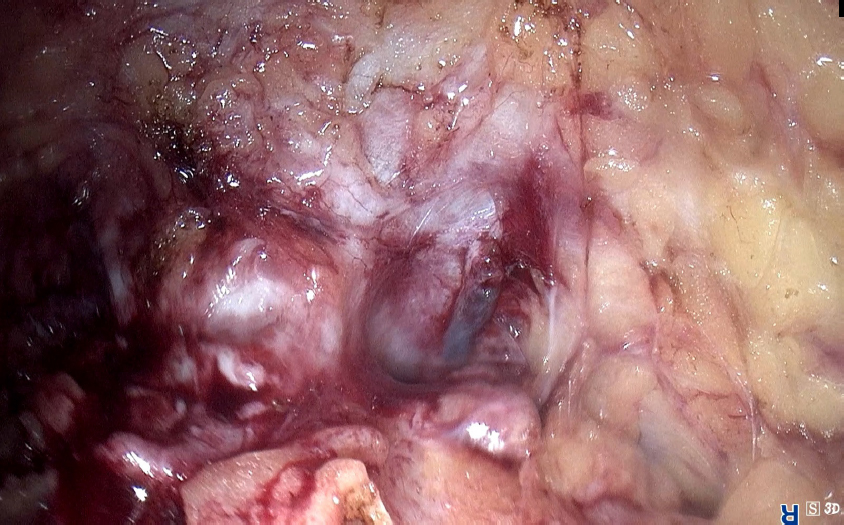 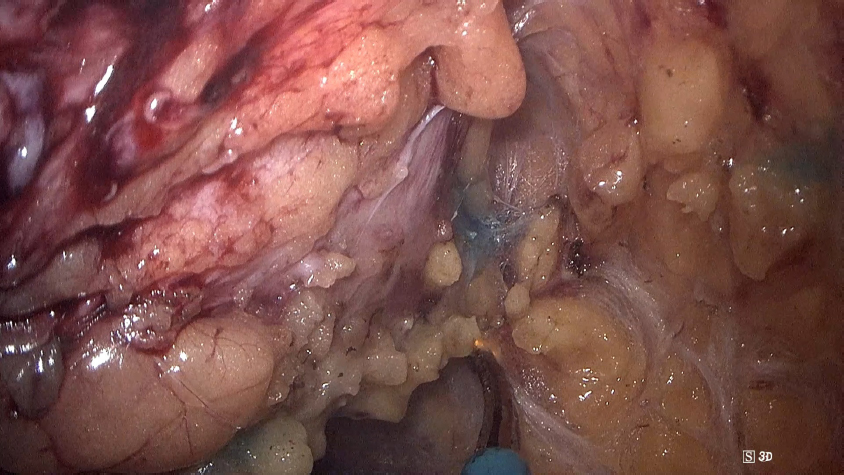 Patient was discharged the next day and drain subsequently removed on Postoperative Day 5. Following the surgery, the patient was seen a month after surgery with excellent aesthetic outcomes [Figures 11-13]. 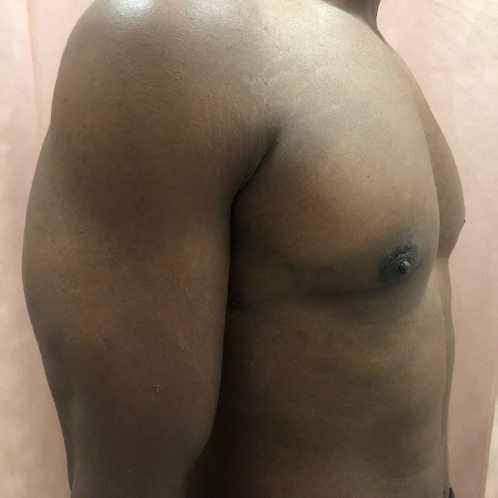 Single-port 3D endoscopic subcutaneous mastectomy is a novel and aesthetically superior approach for the treatment of gynaecomastia if compared to conventional methods.

Conception and design of the study: Mok CW, Hing JXJ

Written informed consent for publication was obtained as appropriate. 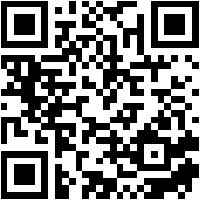