Even though robotic-assisted surgery is increasingly used for resection of non-small cell lung cancer (NSCLC), data on long-term oncologic outcomes of robotic surgery are still not well defined. The primary endpoint of this review is to analyse the long-term results of robotic lobectomy in NSCLC patients. A systematic research was performed using the PubMed database. Articles published from January 2008 to January 2019 were included. We excluded studies that did not provide results for the long-term outcomes of robotic lobectomy, studies that had fewer than 50 cases and ones that focused on results of sub-lobar resections. Therefore, ten eligible studies were included in this analysis. In total, 2873 patients, with a mean age ranging between 66 and 68 years, who underwent robotic lobectomy for NSCLC, were analysed. Most patients (81%) had early-stage disease. The five-year overall survival for stage I disease fluctuated between 77% and 100%. The five-year disease-free survival was reported to be near 73%. We can conclude that robotic assisted lobectomy is an effective minimally-invasive procedure for lung resection. The current literature shows that robotic lobectomy is associated with long-term survival and lasting disease-free survival, equivalent to those reached by video-assisted thoracic surgery and open approach.

Surgical resection of non-small-cell lung cancer (NSCLC) is the preferred local treatment modality for operable disease and lobectomy remains the gold standard treatment in early-stage lung cancer[1]. Thanks to the technical and technological improvements achieved during the decades, the surgical approach has moved from open procedures to minimally invasive surgery (MIS). MIS [including video-assisted thoracic surgery (VATS) and robot-assisted surgery] has become the preferred approach in patients with no contraindications (anatomic or surgical), given that the less invasive approach does not compromise the oncologic cancer outcomes and is associated with better short-term results compared to thoracotomy[2].

Regardless of the approach, the oncologic principles remain unchanged: the achievement of negative margins (R0 resection) and a systematic lymph node dissection; the open approach for lobectomy remains the cornerstone with which the results of the other techniques are compared.

Recent data have reported an important increase in VATS and robotic lobectomy versus open procedures and several studies have shown that MIS lobectomy results in comparable oncologic outcomes to those of open approach[3,4]. However, Level 1 evidence does not exist and data on long-term outcomes for NSCLC patients treated with robotic approach are still lacking[5].

The aim of this review is to analyse the literature concerning the long-term survival of robotic lung lobectomy.

A literature review was conducted by searching PubMed in July 2019, using the search terms: (“lung cancer” OR “lung tumour” OR “lung neoplasm” OR “NSCLC”) AND (“robotic” OR “robot assisted” OR “da Vinci” OR “daVinci”) AND [“analysis, survival” (MESH TERMS)].

Inclusion criteria were: (1) the paper described robotic-assisted lobectomy; and (2) the study was a randomised controlled trial, meta-analysis or single centre/multicentre database study recording on robotic lobectomy.

Exclusion criteria were: (1) the study did not provide results for the long-term outcomes of robotic lobectomy; (2) the study focused on results of sub-lobar resections; and (3) the study included fewer than 50 cases. 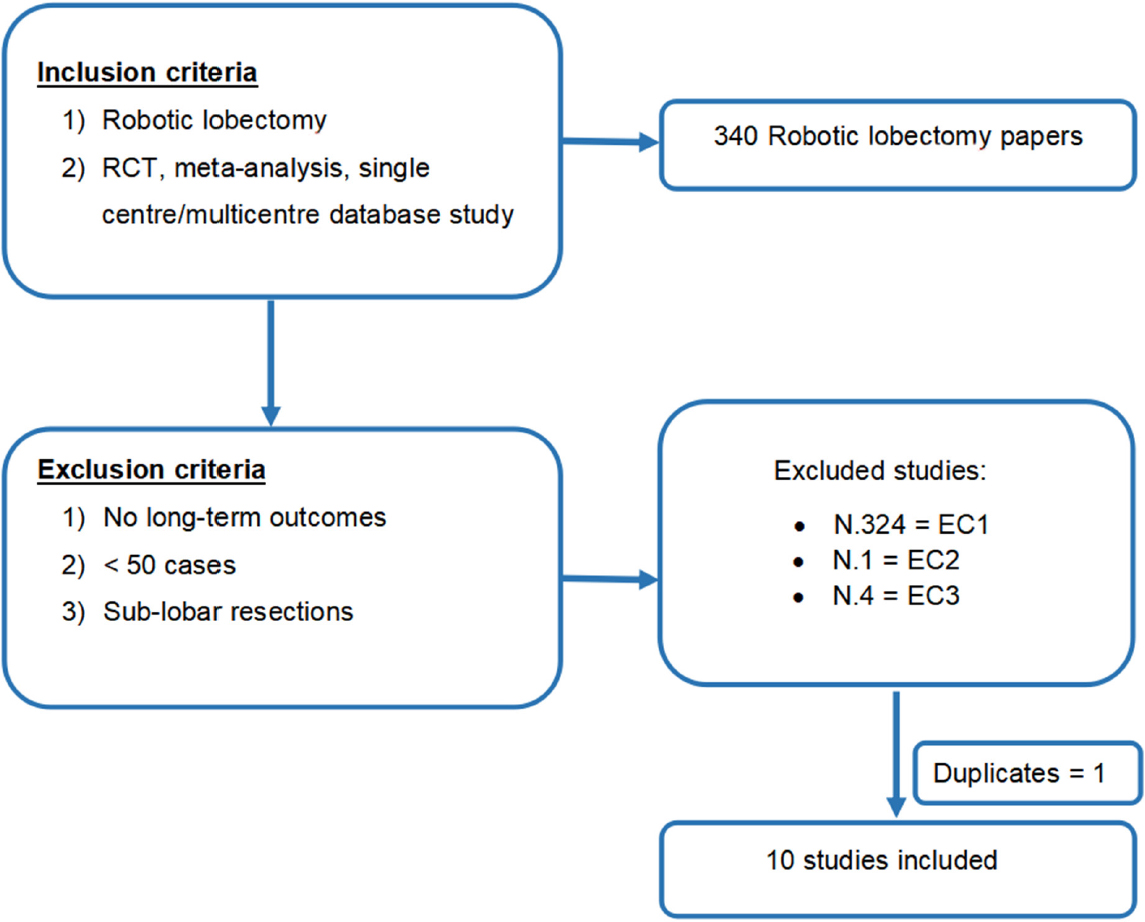 Six retrospective, observational single centre studies, three retrospective multicentre studies and one prospective cohort study published between 2008 and January 2019 were included in this analysis [Table 1]. In total, 2873 patients, with a mean age ranging between 66 and 68 years, who underwent robotic lobectomy for NSCLC, were analysed.

The mid- and long-term outcomes of 2850 patients were analysed, with a survival time analysis ranging between two years and five years. Seven studies showed the survival of patients who underwent robotic surgery in a single centre with a follow-up ranging between 13.3 and 40.3 months. The studies were inhomogeneous for survival time analysis (two-, three- or five-year results) and patients’ stage (only stage I analysis or multiple stage data) [Table 2].

Mid- and Long-term outcomes of NSCLC treated by Robotic approach

Toosi et al.[6] analysed 249 patients who underwent robotic lobectomy and showed a mean operative-time, conversion rate and rates of perioperative outcomes comparable to those of VATS and open surgery. The primary endpoint of this study was the evaluation of the effectiveness of lymphadenectomy (LN) by robotic approach and the authors revealed that LN staging with robotic surgery was comparable to or better than that obtained with conventional VATS and open approach. Moreover, the authors showed an overall survival (OS) comparable with that described in the literature, but the survival analysis was limited by the short mean follow-up time (18 months).

The aim of the study published by Yang et al.[7] was to compare the long-term outcomes [OS and disease-free survival (DFS)] of three cohorts (robotic, VATS and open) of clinical stage I NSCLC patients matched by propensity score. The authors stated that MIS lobectomy for clinical stage I NSCLC guarantees comparable long-term survival as thoracotomy and was associated with shorter hospitalisation. The five-year OS and DFS for the robotic group were 77.6% and 72.7%, respectively, and 13.5% (25/184) patients experimented recurrences.

Another comparative study was the one by Lee et al.[8] The authors retrospectively analysed clinically node negative NSCLC patients who underwent VATS (n = 158) or robotic (n = 53) lobectomy showing a similar rate of nodal upstaging and similar DFS and OS between the two groups. In the robotic cohort with a mean follow-up of 13.3 months, the OS and DFS were 95% and 93%, respectively. They reported three (5.6%) cancer recurrences (all distant). One of the first studies which reported long-term outcomes of robotic surgery was published in 2008. With a follow-up of 28 months, Gharagozloo et al.[9] reported an OS of 100% and a DFS of 93% in a cohort of stage I and II NSCLC patients. No recurrences occurred.

A recent study conducted by Cheufou et al.[10] reported data on 64 patients who underwent robotic lobectomy for lung cancer. Their results showed a two-year survival rate of 83% with a rate of nodal upstaging of 12.9%.

Analyses of larger groups of patients were performed by Casiraghi et al.[11] and Zirafa et al.[12] Casiraghi et al.[11] reported data on 307 lobectomies, 29 segmentectomies and 3 pneumonectomies performed by robotic approach in NSCLC patients (stage IA-IIIA). The five-year OS of the lobectomy cohort was 89.1% with a DFS of 72.8%. There were 58 recurrences: 16 local (ipsilateral to the operated chest), 27 regional (contralateral) and 15 distant.

Three retrospective multicentre studies were also included in this review. The first was conducted by Park and examined data on 325 patients who underwent robotic lobectomies in three high volume centres: 123 patients in New York, 82 in Milan and 120 in Pisa. The majority of the patients (76%, 248/325) were pathologic stage I (176 stage IA and 72 stage IB). Overall one- and five-year survival for the group was 98% and 80%, respectively. Twenty-five patients died of their disease. At a mean follow-up of 27 months, the recurrence rate was 10% (32/325). Most recurrences (72%) were distant (17 distant only; 6 locoregional + distant), and 28% (9/32) were locoregional only[13].

The retrospective multicentre (seven centres) study led by Veronesi et al.[14] analysed 223 patients with NSCLC or carcinoid, with pathological (post-surgical) N2 disease (Stage IIIA) treated by robot assisted resection with curative intent, before or after chemotherapy or chemoradiation therapy. The study included 34 patients who underwent resection after induction therapies. With a mean follow-up of 18 months, mean survival for the 210 NSCLC patients (13 carcinoids) was 51 months, with three-year OS estimated at 61.2%. Twenty-five per cent of patients (56 cases) had distant relapse and 16.6% had local or lung recurrence.

Robotic approach for lobectomy is one of the newest evolutions in MIS for NSCLC; however, long-term data on its oncologic efficacy are still limited. For this purpose, in this review, we have analysed ten studies, both monocentric and multicentric, to examine oncologic outcomes of patients who underwent robotic lobectomy.

The conversion rate exposed in the present review ranges between 0% and 9.8%, comparable to that reported in the literature and lower than that of VATS[16-18]. Only one study reported a higher conversion rate in patients who underwent surgery after induction therapies (15% vs. 9.9%); however, this study showed the feasibility and safety of robotic approach even after neoadjuvant chemo-radiotherapy[14].

The 30-day mortality rate of the entire population examined in this review is 0.25% (range 0%-4.9%). According to a recent meta-analysis conducted by O’Sullivan et al.[19], the mortality rate is lower for patients who underwent robotic surgery compared to VATS or Open approaches with an overall protective effect of robotic over thoracotomy [OR: 0.53, 95%CI: 0.33-0.85 (P = 0.008)] and over VATS [OR: 0.61, 95%CI: 0.45-0.83 (P < 0.001)]. Notwithstanding these results should be thoughtfully considered, given that a possible selection bias in robotic cohort may have occurred, data on short-term outcomes of robotic surgery are very interesting.

Analysing the long-term results, the overall and stage-specific survival of robotic lobectomy are consistent with data reported by Goldstraw et al.[20], which were mainly obtained by open surgery [Table 3].

Stage specific overall survival according to the eighth edition of TNM

According to the largest multicentre series of robotic lobectomy analyses by Cerfolio et al.[15], which also included many other examined cohorts, the OS of patients who had completely resected NSCLC via robotic lobectomy is favourable compared to open surgery. One possible explanation proposed by the authors is a reduction of immunocompromised state after MIS surgery.

Moreover, the authors stated that DFS of robotic cohort is promising, especially in case of N2 disease. This is probably due to the easier and more precise dissection of lymph node during robotic surgery, which also leads to superior upstaging compared to VATS, improved staging and greater chance to undergo adjuvant chemotherapy[21].

Our review reports good short- and long-term outcomes after robotic lobectomy for NSCLC, which combines the benefits of MIS with the accuracy of open surgery in stage-assessment, showing an overall and stage-specific OS comparable with that reported by IASLC database.

Prof. Melfi is an official proctor for Intuitive Surgical. Drs. Davini, Ricciardi, Zirafa and Romano have no conflict of interest or financial ties to disclose. 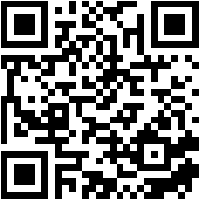