Total mesorectal excision (TME) is accepted as the standard technique in rectal surgery. In recent years, significant attention has been focused on transanal TME (taTME) as a promising approach for rectal cancer. However, this approach can involve an inherent risk of male urethral injury, because there is no clear anatomical border between the rectal muscularis propria and rectourethral muscle. We used a lighted urethral stent to identify the urethra during taTME for 6 patients with distal rectal cancer. In five of six cases, an infrared-detecting camera could detect a red fluorescent signal from the lighted urethral stent during the anterior dissection of the rectum, which helped us to determine the correct dissection line. A lighted urethral stent is a useful tool that helps visualize the urethra during taTME and improves taTME applicability in clinical practice.

Total mesorectal excision (TME), introduced by Heald, is accepted as the standard technique in rectal surgery[1]. As compared to open surgery, laparoscopic surgery can provide better visibility in a narrow pelvic space, which enables surgeons to conduct precise TME surgery. Laparoscopic rectal surgery has been accepted based on accumulating evidence; however, it remains technically difficult in cases with obesity and/or a narrow pelvis. Recent randomized controlled trials (RCTs) (i.e., COLOR II and COREAN) exhibited more favorable outcomes of laparoscopic rectal surgery compared with open rectal surgery[2,3], whereas other recent RCTs (i.e., ALaCaRT and ACOSOG Z6051) did not[4,5]. In recent years, transanal TME (taTME) surgery for rectal cancer has attracted intense attention due to the improvements in the quality of TME. However, this approach can involve an inherent risk of male urethral injury during anterior dissection of the rectum[6-10], because there is no clear anatomical border between the rectal muscularis propria and rectourethral muscle. In taTME surgery, anatomical knowledge of the male anterior anorectum is critical to avoid male urethral injury and rectal perforation. We recently reported the three-dimensional morphology of the male anterior anorectum based on the histological analyses of male cadavers[11]. In clinical practice, limited studies have reported on the utility of a lighted urethral stent during taTME surgery[6,7,10]. In this study, we show the anatomical findings of the anterior anorectum in a cadaveric study as well as the availability of a lighted urethral stent in a clinical setting.

In a clinical study, we used a lighted stent (Infrared Illumination System, Stryker. Inc.) to identify the urethra during taTME in six patients with distal rectal cancer. For visualization of the urethra, a lighted stent was preoperatively introduced into a three-way urinary catheter (#18Fr Foley), which was placed into the bladder [Figure 1]. The lead of a lighted stent was connected to an external infrared source generator. The wavelength of the lighted stent was approximately 830 nm, and, hence, an infrared-detecting camera system (1588 AIM Platform, Stryker) was employed to detect a fluorescent signal from the lighted stent. Informed consent was obtained from all patients. The study protocols were approved by the Institutional Review Board of Kyoto University. 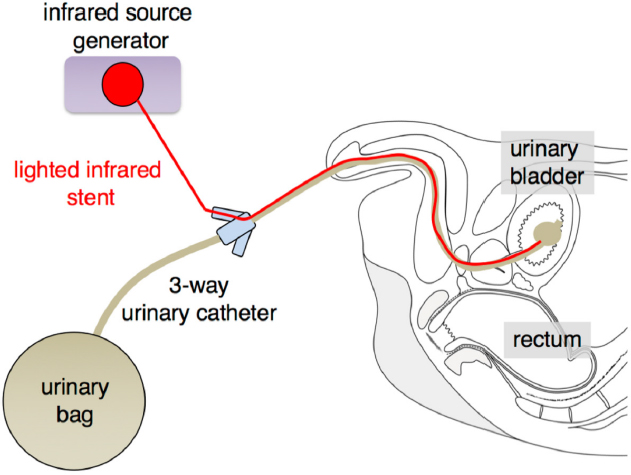 Figure 1. Setup of a lighted stent 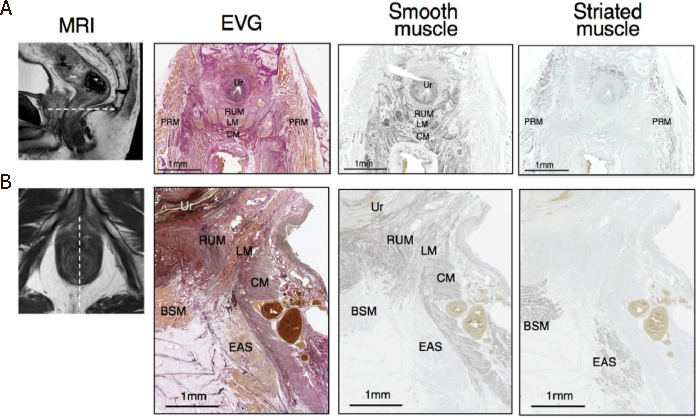 We used a lighted stent to identify the urethra in six taTME surgeries: abdominoperineal resection (APR; n = 4) and intersphincteric resection (ISR; n = 2). Vessel ligations and mobilization of the left-sided colon were laparoscopically performed. The perineal approach was conducted under direct vision to attach a GelPoint Mini port device (Applied Medical). After GelPoint Mini was placed, taTME was initiated. The posterior side of the rectum was first dissected until the sacral promontory was reached. Next, the dissection was extended toward the lateral side. Bilateral pelvic splanchnic nerves were preserved at the 5 and 7 o’clock positions. On the anterior side, the correct dissection line could not be easily identified because there was no clear anatomical border. Therefore, an infrared-detecting camera (1588 AIM) was used to detect a red fluorescent signal from a lighted urethral stent in real time during the anterior dissection of the rectum. Figure 3 shows the views of the anterior side in Case 2 (APR). The red fluorescent signal could be detected during division of the rectourethral muscle. The signal was bright with low background under the turned-off mode. Anterior dissection was conducted using fluorescent information as reference. The red-lighted area was located between the superior part of membranous urethra and the inferior lobe of prostate. In five of six cases (i.e., Cases 1-4 and 6), we could detect the red fluorescent signal from a lighted urethral stent under the turned-off mode [Figure 4]. The portion of the lighted area was similar in the five cases, although the fluorescence intensity was slightly different depending on the angle of the lighted stent. Under the normal light mode, the fluorescent signal was not detected in all six cases. In Case 4, the fluorescent signal was weak under the turned-off mode. When the prostate was broadly pressed by the forceps, the fluorescent signal was slightly enhanced. In Case 5, we could not detect a fluorescent signal even if the prostate was broadly pressed. No significant complications were observed in all cases. 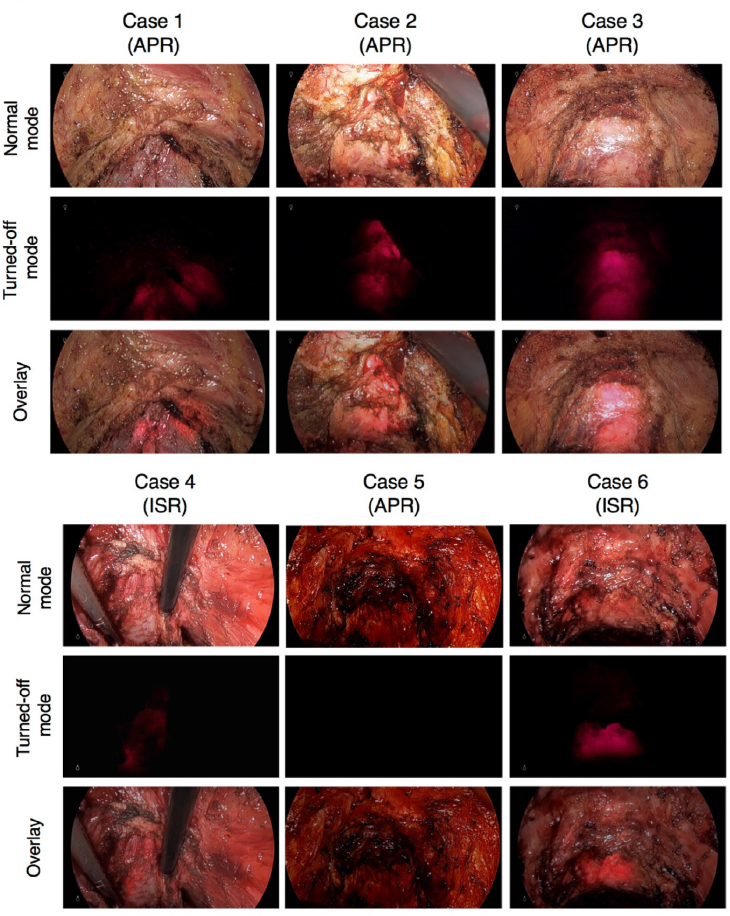 In the present study, a fluorescent signal from a lighted urethral stent could not be detected in one case (Case 5). It is not clear why a fluorescent signal could not be detected. Although the lighted stent was designed to illuminate through up to 12 mm tissues, the intensity of the fluorescent signal can be affected by some factors: for example, the thickness of the tissues covering the urethra and prostate, the distance between the lighted stent and laparoscopic camera, the rotation angle of the urinary catheter, and the equipment condition. Further investigation is needed to validate our findings.

A lighted urethral stent is useful to visualize the urethra during taTME surgery in clinical practice. The assistance of fluorescent information helped in reducing the risk of urethral injury on the anterior side.

This study was supported by the Japan Society of Laparoscopic Colorectal Surgery.

A cadaveric study was conducted following the Act on Body Donation for Medical & Dental Education law of Japan. In a clinical study, informed consent was preoperatively obtained from all patients. This study was conducted in accordance with the ethical principal that have their origins in the Declaration Helsinki, and the protocols were approved by the Institutional Review Board of Kyoto University. 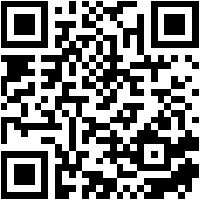