Aim: We have recently standardized upper mediastinal lymph node dissection (UMLND) based on microanatomical concepts in minimally invasive esophagectomy using a 4K ultra-high-definition (HD) system. In this study, the aim was to investigate the outcomes of microanatomy-based standardization using 4K ultra-HD for UMLND with the main focus on thoracoscopic operative time.

Results: In the post-standardization group, the rate of surgeries performed by operators with less than 20 years’ experience was significantly higher (P < 0.001). There were no significant differences in the number of mediastinal lymph nodes dissected, intraoperative blood loss and total postoperative morbidity rates between the two groups. The rate of recurrent laryngeal nerve palsy decreased to less than half (19.8% to 9.6%) (P = 0.061) and the thoracoscopic operative time decreased [232.0 (202.8-264.0) min to 209.0 (176.0-235.0) min] significantly (P < 0.001) after standardization. The moving average showed a marked decrease of thoracoscopic operative time during the standardization phase.

Conclusion: Microanatomy-based standardization enabled quicker and more precise UMLD despite an increase in the number of surgeries performed by less experienced operators.

Esophageal cancer (EC) is one of the most common gastrointestinal malignancies, mainly in Asian countries, and has a poor prognosis[1]. Even today, primary treatment is still radical esophagectomy with regional lymphadenectomy[2]. The surgical strategy for EC though has been shifting towards minimally invasive esophagectomy (MIE). Currently, thoracoscopic esophagectomy is the most common type of MIE. In 1992, the world’s first thoracoscopic esophagectomy was performed in the lateral decubitus position[3]. For a period of time after, thoracoscopic esophagectomy in the lateral decubitus position (TELP) was the standard in MIE, and much progress was made, especially in Japan[4,5]. Although thoracoscopic esophagectomy in the prone position (TEPP) was reported slightly later than TELP[6,7], this procedure had not been used for a while. However, in 2006, Palanivelu et al.[8] reported about 130 cases of TEPP and showed both decreased operative time and the frequency of respiratory complications compared with TELP and open esophagectomy. It was also reported that the main reasons for TEPP’s usefulness were due to the advantages of good exposure of the surgical field and improved ergonomics for the surgeon. Since then, TEPP has increasingly been adopted all over the world, including here in Japan, and there have been several reports of the tolerability and efficacy of this procedure[9-12].

Upper mediastinal lymph node dissection (UMLND) remains the most important procedure in esophageal cancer surgery. However, this has also been the most difficult and time-consuming part, especially in TEPP. Although there have been technical reports about UMLND in TEPP, the longer thoracoscopic operative times and the higher recurrent laryngeal nerve (RLN) palsy rates of 10%-28% represent persistent challenges[9,13,14]. Recently, progress in the development of endoscopic optical instruments [2K full high-definition (HD), 4K ultra-HD, and 3-dimensional] has been remarkable. Using them, we have been able to identify the fine microanatomy of membranes and layers that were not previously visualized, and there have been some reports on this new concept of surgical microanatomy and its usefulness in esophageal cancer surgery[13-18].

In our institution, we have performed more than 500 cases of TEPP. Since reaching around 350 cases, we have been able to use a 4K ultra-HD system for our surgeries. Therefore, we started microanatomy-based standardization of UMLND using this endoscopically magnified view and established it when we reached around 400 cases. Previously, we have reported the concept of this standardization on the left side and its usefulness for safe and efficient surgery, especially for decreasing recurrent laryngeal nerve palsy rates[19]. Concurrently, we have also standardized UMLND on the right side with the same concept as on the left within the same period.

The aim of this study was to investigate the outcomes of our microanatomy-based standardized procedure for UMLND on both sides using a 4K ultra-HD system, with a focus on decreasing operative time.

From June 2011 to January 2019, TEPP was performed in 500 patients (430 males, 70 females) with esophageal cancer at Okayama University Hospital. After reaching about 350 cases in April 2017, we started the microanatomy-based standardization of UMLND using a magnified view through a 4K ultra-HD system, and established it after reaching about 400 cases in November 2017. In this study, two groups were compared for the analysis: a pre-standardization group (100 cases up to completing 350 cases) and a post-standardization group (100 cases after completing 400 cases), as in our previous study[19]. Cases with tumors invading surrounding organs (T4), with omission of UMLND, after thoracotomy, and cases of robotic surgery were excluded. Final analysis thus included 91 cases of the pre-standardization group, and 83 paired cases of the post-standardization group. This study was approved by the Ethics Committee of Okayama University Hospital (1811-009).

Positioning of the patient, placement of the thoracoscope and ports, and the basic procedure of TEPP were performed as previously reported[19,20]. Since April 2017, a 4K ultra-HD camera system (IMAGE1 STM, Karl Storz, Tuttlingen, Germany and Visera 4K UHD, Olympus Corporation, Tokyo, Japan) has been used.

Figure 1. A: the microanatomical concept in the upper mediastinum; B: detaching the meso-esophagus while preserving the visceral sheath 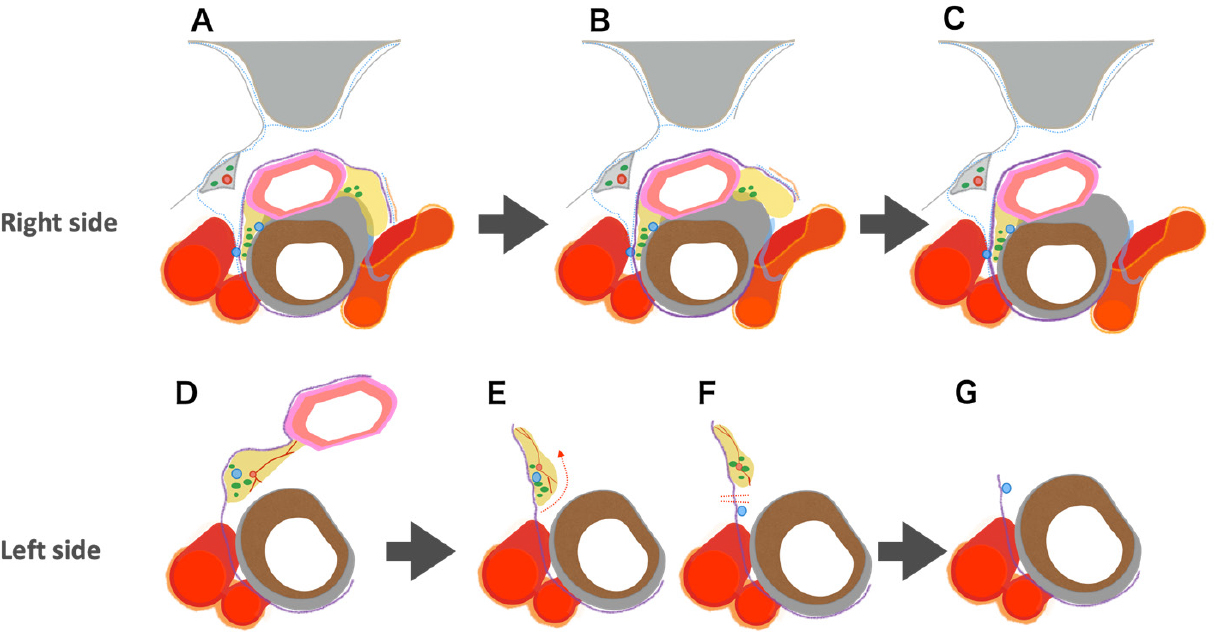 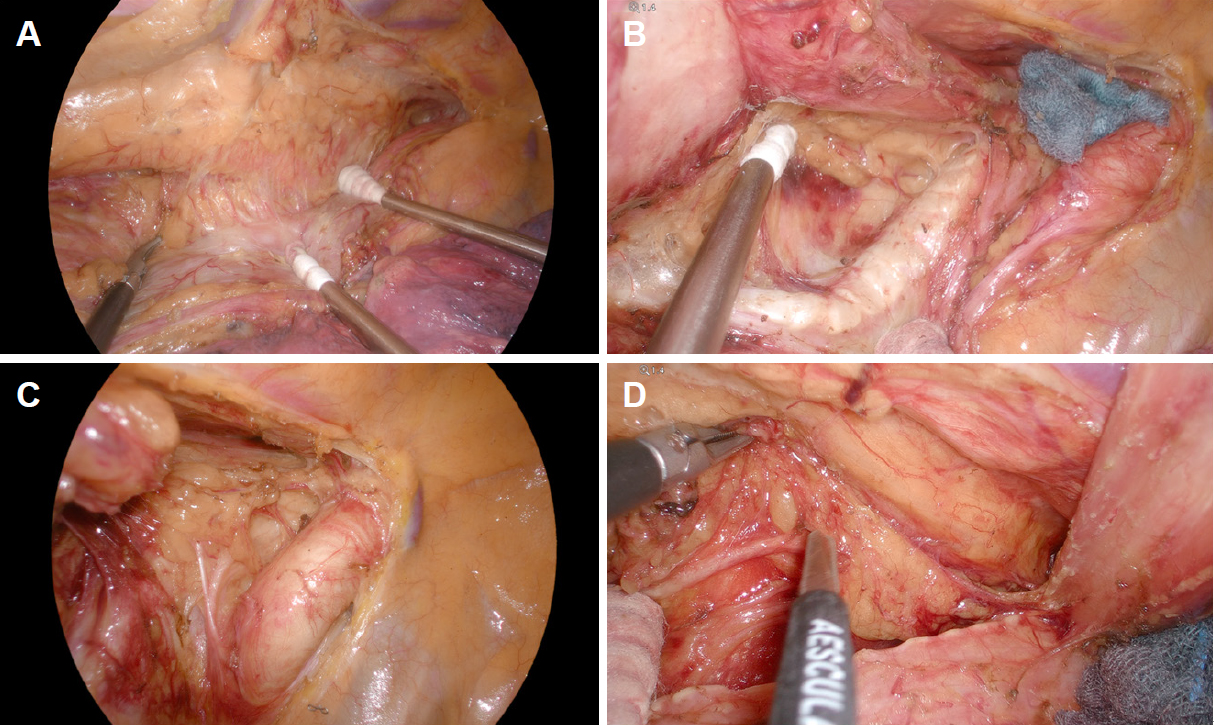 Clinicopathological factors were noted according to the Japanese Classification of Esophageal Cancer[21,22] and the Union for International Cancer Control TNM Classification of Malignant Tumors, 8th edition[23]. Postoperative complications were categorized using the Clavien-Dindo classification[24][Table 1]. To evaluate differences between the two groups, continuous variables were assessed using the Mann-Whitney test, and categorical variables were assessed using the χ2 test or Fisher’s exact test. Differences were considered significant when P values were < 0.05. All analyses were performed using JMP version 14 statistical analysis software (SAS Institute, Cary, NC, USA). The thoracoscopic operative time learning curve was analyzed using the moving average method[25,26]. With the moving average method, using the mean of thoracoscopic operative times, the trends are clarified and the changes are smoothened. A 20-case moving average was used in this study, and the exclusion criteria of the cases were the same as above.

There were no significant differences in patient characteristics between the two groups [Table 1]. On the other hand, the rate of surgeries performed by operators with less than 20 years’ experience was significantly higher in the post-standardization group (P < 0.001).

There were no significant differences between the two groups in the amount of blood loss during surgery, and the number of dissected lymph nodes around the recurrent laryngeal nerves (No. 106). In both groups, no patients required conversion to open thoracotomy [Table 2]. There were no significant differences in total morbidity rate, the incidence of respiratory complications or anastomotic leakage (≥ Grade 2). Regarding RLN palsy, vocal cord motility was checked in all patients by endoscopy on postoperative day 1, and any dysmotility was defined as RLN palsy (≥ Grade 1). The incidence of RLN palsy decreased to less than half (19.8% to 9.6%) after standardization (P = 0.061) [Table 2]. There were also no significant differences in ICU stay and postoperative hospital stay, and there were no postoperative mortalities in either group. 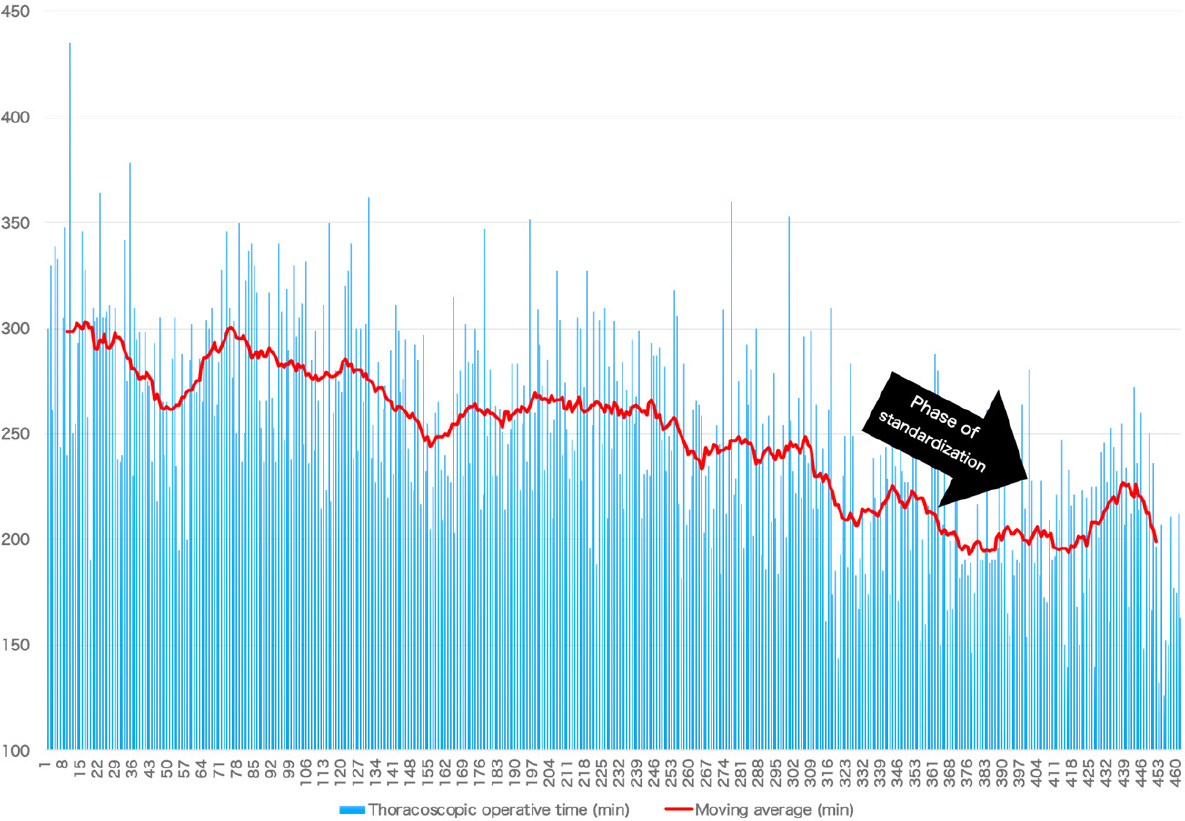 When most MIEs were performed via TELP, there were reports that precise mediastinal lymph node dissection by MIE was as feasible as that by open thoracotomy with the added advantages of lesser decrease in respiratory function and lower respiratory complication rates[4,5]. However, even now, it is important in TELP to have a special team composed of three experts (i.e., surgeon, assistant, and endoscopist) to perform the procedure smoothly. On the other hand, an excellent surgical field contributed simply by gravity and artificial pneumothorax without the need for an assistant is one advantage of TEPP. Furthermore, the improved ergonomics for the surgeon in TEPP is another advantage.

In the early phase of introducing TEPP in this decade, there were some reports about its conferred advantages for lymph node dissection, especially in the upper mediastinum[9-12]. Along with the recent, remarkable progress of endoscopic optical instruments such as 3D and 4K ultra-HD, there have also been reports about the microanatomy-based surgical concept for MIE, similar to total meso-rectal excision in rectal cancer surgery[13-18]. More recently, we have established the microanatomy-based standardization using the concept of the meso-esophagus wrapped with the visceral and vascular sheaths and reported its usefulness for left UMLND[19]. Although we thought that this concept could also be applied for right UMLND, the asymmetrical anatomical structure in the upper mediastinum was an issue. The branching patterns of the arteries are different and the points of recurrence of the recurrent laryngeal nerves and their running direction and length are also different. However, for both the right and left sides, the recurrent laryngeal nerves originate from each main trunk of the vagal nerve within the vascular sheath and transit to the inner aspect of the visceral sheath after turning back at an artery. The nerves then run to the larynx as their target organ through the meso-esophagus. In addition, lymph nodes around the recurrent laryngeal nerve that should be dissected as regional lymph nodes are located within the meso-esophagus on both sides. In the first step of our standardization of UMLND, it is most important not to destroy the visceral sheath enveloping the lymphatic chain in the meso-esophagus, although the vascular sheath on each side should be detached in a different manner and range. After that, we proceed to en bloc lymph node dissection while preserving the visceral sheath and nerve.

Regarding thoracoscopic operative time, the first learning curve occurred due to the initial standardization of the lower mediastinal procedure of TEPP[20]. After the initial standardization, the indication was expanded for thoracoscopic surgery. The thoracoscopic operative time again lengthened, followed by a second gentle, natural learning curve. However, after that, no obvious learning curve effect was achieved until more than 300 cases. Nevertheless, the microanatomy-based standardization during this time from case 350 to 400 contributed to a marked decrease in thoracoscopic operative time (by almost 30 min), even though the number of surgeries performed by less experienced operators increased. We believe that accurate understanding of the microanatomy involved contributed towards defining the surgical planes more easily for quick dissection of tissues including the lymph nodes with without extra bleeding. On the other hand, young surgeons could also learn the microanatomy from experienced surgeons through the clear 4K HD images and could re-watch the operation many times. Furthermore, there was also a concurrent decrease in postoperative complication rates. Therefore, our microanatomy-based concept appears to be useful not only for accurate and quick UMLD, but also for young surgeons to master the procedure efficiently.

In conclusion, microanatomy-based standardization using a 4K ultra-HD system enabled quicker and more precise UMLD despite an increase in the number of surgeries performed by less experienced operators.

The authors would like to thank FORTE (https://www.forte-science.co.jp/) for English language review.

Writing and revision of the manuscript: Shirakawa Y 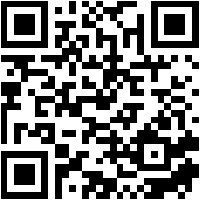