Bronchovascular variations exists in the general population but are often only diagnosed pre- or intra-operatively. Tracheal bronchus is a rare congenital variation of the bronchial tree structure and can be seen in 0.1%-3% of population[1-5]. Primary lung cancer in association with tracheal bronchus is an even rarer entity[1,6,7]. We present a case of a middle-aged female with right upper lobe carcinoma, tracheal bronchus and other bronchovascular variations, who underwent uniportal video-assisted thoracoscopic (VATS) right upper lobectomy and lymphadenectomy.

A 40-year-old female was referred to our Thoracic Surgery unit for right upper lobe carcinoma. She initially presented to a primary health care centre with digital clubbing, but no other respiratory symptoms. The patient was a chronic smoker, with a 20 pack year history. 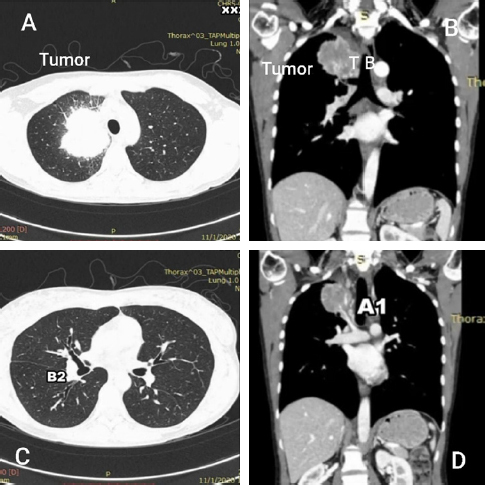 The patient’s lung function test was acceptable, with a predicted postoperative forced expiratory volume in one second (PPOFEV1) of 81% for right upper lobectomy. Her CT was reviewed in the Thoracic Surgery outpatient clinic, and it was then noted that the patient had a right upper lobe bronchus originating from the trachea, a tracheal bronchus [Figure 1B].

The patient underwent uniportal VATS right upper lobectomy and lymphadenectomy. Intraoperatively, the tumor measured 6 cm × 7 cm [Figure 2] and both the oblique and horizontal fissures were completely fused. Besides the tracheal bronchus, other anatomical variations were found. The posterior segmental bronchus (B2) was noted to be originating from the bronchus intermedius [Figures 1C and 3C], and the A1 artery was seen to be originating from the right main pulmonary artery [Figures 1D and 3D], while the A2 and A3 were from the truncus anterior [Figure 3D]. Lymph nodes at stations 2R, 4R, 7, 8 and 10 were dissected and cleared. 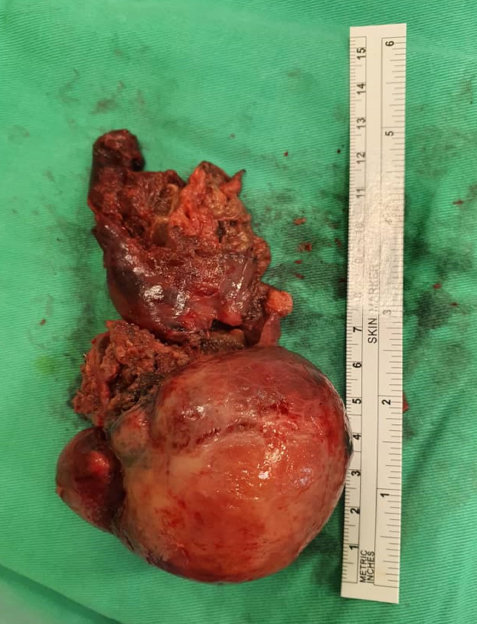 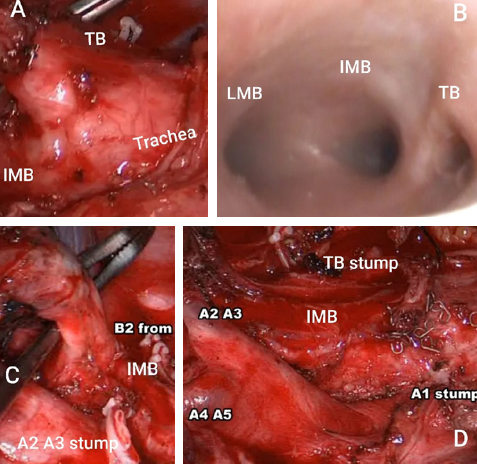 Surgery was performed entirely via uniportal VATS, with blood loss of approximately 100 mL. The patient’s post-operative recovery was uneventful, and she was discharged home well on post-operative day 5. The histopathological diagnosis was solid type adenocarcinoma, T3NO (0/21) MO based on TNM staging, which translates to Stage IIB disease. The patient was later referred to an oncologist for adjuvant therapy. The surgical video is available for viewing at https://youtu.be/93xKNmBR4Ns.

Tracheal bronchus was first described by Sandifort in 1758[1-3]. This condition is also known as bronchial suis or pig bronchus. It is a rare congenital anomaly, described as an ectolupic bronchus arising from the lateral wall of the trachea, proximal to the carina. The incidence of tracheal bronchus is reported to be between 0.1%-3%[1-5].

Trachel bronchus more commonly occurs on the right side (0.1%-3%) than the left (0.3%-1%)[3,8]. Tracheal bronchus can arise anywhere between the carina and the cricoid cartilage, most commonly 2 cm from the carina. The highest origin of tracheal bronchus reported was 6 cm from the carina[9]. Tracheal bronchus is also associated with other congenital abnormalities like Down’s syndrome, tracheoesophageal fistula, VATER (vertebra, anus, trachea, esophagus, renal) syndrome, esophageal atresia, laryngeal and duodenal webs, spinal fusion defects and congenital cardiac defects[3,4,8,9]. Amongst patients with tracheal bronchus, 69% have associated cardiac disease, 35% have associated chromosomal abnormalities and 11% have spinal fusion defects.

Majority of patients with tracheal bronchus are asymptomatic. Symptomatic patients usually present with recurrent chest infections due to retained secretions. Symptomatic children usually present with stridor and recurrent pneumonia[1,2,6,8,10]. Treatment is advocated for patients with severe, recurrent symptoms, with definite treatment being an upper lobectomy. Asymptomatic patients do not require intervention. Despite being asymptomatic, our patient required intervention due to the incidental mass found on chest X-ray.

Variations in bronchovascular patterns are common, hence it is important for a thoracic surgeon to look out for these variations, both pre- and intra-operatively, in order to prevent devastating outcomes. In a study by Nagashima et al.[13], bronchovascular patterns of the right upper lobes of 263 patients were reviewed using 3D CT angiography and bronchography images. Based on their study, 71.9% (189 patients) had the usual pulmonary artery branching, and 44.1% (116 patients) had the usual upper lobe bronchial branching, as classically described in most textbooks[13]. The remaining patients had variations in bronchovascular supply to the right upper lobe. In 13.3% of patients, the origin of A1 and A3 varied, as in the subject of this case report.

In conclusion, primary lung carcinoma with associated tracheal brochus is rare. A myriad of other bronchovascular variations exists, with or without an associated tracheal bronchus. It is imperative for thoracic surgeons to have thorough knowledge on bronchovascular pattern variations, and to perform thorough dissection during surgery in order to avoid devastating outcomes. In the hands of an experienced surgeon, with detailed preoperative planning, uniportal VATS lobectomy can be safely performed with good outcomes and low morbidity.

Collected and selected articles: Dharmaraj B

Approval obtained from the office of the Director and the hospitals’ ethics committee to proceed with this analysis and publication.

The author(s) declared that informed consent has been taken from the patient for usage of peri-operative data and images for publication purpose. 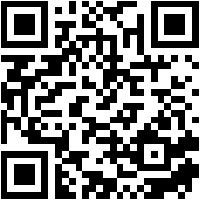