Aim: We investigated the impact of the anastomotic method in the frame of open abdominothoracic esophageal resection (hand-sewn vs. stapler anastomosis) in patients with carcinoma submitted to surgery in the University Clinic of Saarland over a 14-year period.

Conclusion: The management of anastomotic leak (stent insertion vs. reoperation) combined with the use of stapler to perform intrathoracic esophagogastric anastomosis improved the postoperative outcome after abdominothoracic esophageal resection.

We performed a retrospective, non-randomized study to investigate which anastomotic method rendered better results. Our study population consisted of 176 patients with esophageal carcinoma, with intrathoracic anastomosis after abdominothoracic resection. We performed an Ivor-Lewis abdominothoracic esophageal resection, consisting of a median laparotomy, mobilization of the stomach and preparation of a conventional gastric tube. Simultaneous cholecystectomy was routinely performed[19]. The gastric conduits were performed conventionally[20] (three patients submitted to fundus rotation gastroplasty to achieve longer gastric conduit and better blood supply[9] were excluded). For conventional tube formation, the lesser curvature with the vessel arcade was resected with linear stapler[21]. The right gastric and gastroepiploic vessels provide the blood supply of the gastric conduit. A right anterolateral thoracotomy was performed, and the esophageal resection was performed in the level of azygos vein. D2 lymphadenectomy was routinely performed. Patients were divided into two groups: Group 1 received hand-sewn, double row, end-to-end anastomosis using 4-0 PDS and 5-0 PDS stitches and Group 2 received single row end-to-side, stapler anastomosis using a 25-mm circular stapler. The type of anastomosis was selected upon surgeon’s preference. Anastomosis was mainly performed as hand-sewn from 2001 to 2012 and changed to a stapler anastomosis routinely using the circular intraluminal stapler (Covidien, EEA, DST Series). Operations were only performed by chief or experienced senior surgeons.

Both groups were compared regarding anastomotic leaks and strictures, postoperative morbidity, 90-day mortality and survival.

The disruption of the anastomosis leading to extravasation of intraluminal content was defined as anastomotic leak. The definite diagnosis of anastomotic leak was confirmed endoscopically. Data collection and analysis were performed only on patients who underwent an intrathoracic anastomosis.

Endoscopy was performed preoperatively as well as 6 months postoperatively to exclude tumor recurrence. In the preoperative work-up, a computed tomography was performed to detect further organ metastases. Neoadjuvant therapy was carried out preoperatively according to the international guidelines[23]. Surgical resection followed 4-6 weeks after the end of the neoadjuvant therapy. Until 2012, we used the PLF scheme, based on cisplatin, folic acid, 5-fluoruracil and simultaneous irradiation [45 Gy (1.5 Gy per day)] in cases of squamous-cell esophageal carcinoma. Since 2012, we have performed neoadjuvant chemoradiation, as proposed by the Dutch CROSS trial, consisting of weekly administration of carboplatin und paclitaxel for 5 weeks and concurrent radiotherapy (41.4 Gy in 23 fractions) followed by surgery 4-6 weeks later. Cardiopulmonary examinations (electrocardiogram, echocardiogram and lung function test) were performed preoperatively.

Chi-square and Mann-Whitney U tests were respectively used. 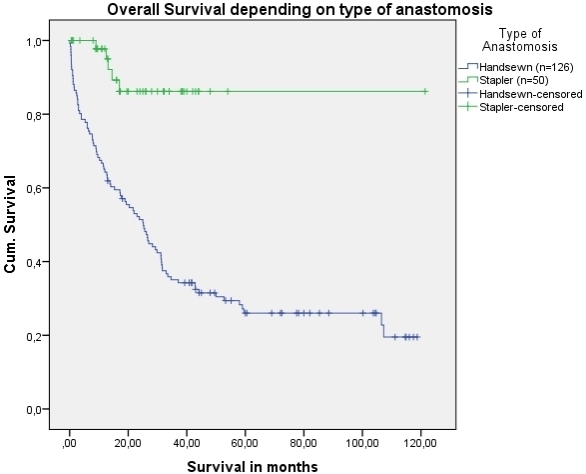 Figure 1. Cumulative survival after abdomino-thoracic resection with intrathoracic anastomosis for esophageal cancer depending upon the type of anastomosis (P < 0.001, log rank test).

In the multivariate analysis, the type of anastomosis and advanced UICC tumor stage were independent factors that significantly influenced overall survival [Table 5 and Figure 2]. 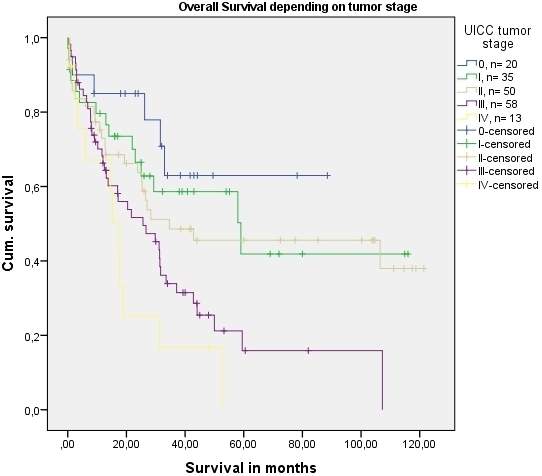 In the present study, we focused on the impact of anastomotic method (intrathoracic stapler vs. hand-sewn esophagogastric anastomosis) on surgical outcome after abdominothoracic esophagectomy for cancer. Our data suggest that the management of anastomotic leak (endoscopic stent insertion vs. reoperation), combined with the use of stapler to perform intrathoracic esophagogastric anastomosis, positively influences postoperative morbidity, mortality and overall survival.

Simultaneous cholecystectomies were performed in the study period routinely, in order to avoid symptomatic gallstone formation later. Since 1947, it has been hypothesized that there is an increased rate for gallstone formation after gastric surgery[26], as a result of resection of the anterior branch of the vagal nerve interrupting gallbladder innervation, thus disturbing gallbladder emptying and increasing cholecystokinin release[27-29]. Gillen et al.[30] showed that the benefit of simultaneous cholecystectomy in the frame of gastric/esophageal resection does not outweigh the risks, thus not supporting the hypothesis of prophylactic cholecystectomy. This suggestion was based on the 6% incidence of acute/later cholecystectomy and the higher calculated additional morbidity of 0.95% compared with 0.45%[30]. One out of the 176 (0.005%) patients of our study group was submitted to redo surgery because of biliary leak after prophylactic cholecystectomy in the frame of esophageal resection, thus not adding substantial morbidity.

The advantages of the present study are the qualitative homogeneity of the included patients and the thorough analysis of numerous parameters. We chose to include in the analysis only patients subjected to open Ivor-Lewis abdominothoracic esophageal resection with intrathoracic anastomosis. The therapeutic protocol used in our department is also standardized and given in detail. A thorough comparison of various parameters including intraoperative blood loss, duration of surgical procedure, number of reoperations, 30-, 60- and 90-day mortality and overall survival was performed.

The limitations of the present study are its retrospective, non-randomized character and the fact that the numbers of hand-sewn and stapler esophagogastric anastomoses are not equal (126 vs. 50). The management of anastomotic leaks changed during the different time periods, from being more aggressive (redo surgery) in the past to more conservative now (stent insertion), partially explaining the better postoperative outcome in the stapler anastomosis group.

In summary, the use of stapler to perform esophagogastric anastomosis and endoscopic stent insertion to manage anastomotic leak improved the postoperative outcome after abdominothoracic esophageal resection with intrathoracic anastomosis. In the current study, we experienced a lower anastomotic leaking rate and a better overall survival in favor of the group of patients who underwent a circular stapler anastomosis. Further improvement of surgical technique (minimally invasive surgical procedures) and better perioperative care protocols should further minimize anastomotic leaks after esophageal resections for cancer.

This publication is part of the doctoral thesis of Kolokotronis T with the title: “Postoperative outcome and overall survival after surgery for esophageal cancer; a retrospective, single- center experience of 320 patients encompassing 14 years”. 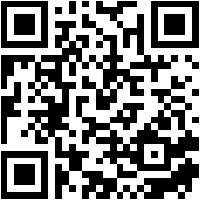