Aim: Hair loss is a common complication after bariatric surgery that is related to nutritional deficiencies. The aim of this study was to evaluate the prevalence of micronutrient deficiencies preoperative and postoperative and their relationship with hair loss 12 months after bariatric surgery (BS) in those younger and older than 45 years of age, with or without a prescription for supplements.

Methods: In this prospective study, performed between 2018 and 2020 on patients undergoing laparoscopic sleeve gastrectomy (LSG) (not generally BS) in our hospital, the patients were categorized into two main groups of with or without a prescription for supplements. In addition, each main group was divided into age subgroups. Then, complete clinical and biological nutritional assessments were performed in these four subgroups, before and after surgery. Hair loss related to nutritional deficiencies were systematically recorded at 12 months after LSG.

Conclusion: Preoperative monitoring of the combination of several nutritional deficits could be used to identify patients at risk and prevent the onset of deficiencies and their consequences after BS. Identification and correction of micronutrient deficiencies were essential for treating hair loss.

The prevalence of obesity, over the last three decades, has tripled with an estimated 13% of adults being obese in 2016[1]. Obesity is not only a cosmetic concern but also a medical problem that increases the risk of other diseases, such as diabetes, atherosclerotic cardiovascular diseases, high blood pressure, and some kinds of cancers[2-5]. According to the World Health Organization (WHO), obesity is defined as “abnormal or excessive fat accumulation that presents a risk to health”[6]. Obesity results from a combination of inherited factors, environmental and socioeconomic factors, personal diet, and exercise choices[7].

Bariatric surgery has evolved in the United States and worldwide over the past two decades and is done to help patients lose excess weight and reduce the risk of potentially life-threatening weight-related health problems. Bariatric surgery is a method of treatment that can be used in the case of patients with BMI ≥ and coexisting complications of obesity, such as arterial hypertension, or with BMI ≥ 40 kg/m2 for normal individuals[8]. The two most commonly performed bariatric surgery procedures are Roux-en-Y gastric bypass and sleeve gastrectomy (SG)[9-11]. However, these methods are not free from complications, and the most common ones are micronutrient deficiencies because of preoperative malnutrition, decreased food intake due to reduced hunger, and increased satiety and food intolerance or vomiting[12]. Some of these deficiencies cause severe clinical impacts, including neurological complications, anemias, bone demineralization, and protein malnutrition[13-15]. Moreover, many patients have symptoms suggestive of nutritional deficiencies after BS, but there are few prospective studies to specify their prevalence after surgery[13-16]. The frequently reported complications in studies are hair loss, cramps, and paresthesia. These symptoms are more frequent in subjects who are noncompliant to medical visits in the long term after surgery[11].

The main aim of our study was to assess the link between symptoms suggestive of nutritional deficiencies such as hair loss and a large panel of nutritional parameters in subjects who underwent bariatric surgery.

In this prospective study performed on LSG candidates from 2018 to 2020, we included consecutive male and female subjects who underwent LSG at our institution and with complete clinical and biological nutritional assessments performed in Erfan Hospital. The subjects were studied were divided into those younger and older than 45 years of age, with or without a prescription for supplements. Multivitamin supplements were systematically prescribed after surgery, and the reference ranges were recommended by the dietetics and nutritional experts based on age and gender. Hair loss related to nutritional deficiencies was systematically recorded at the 12-month follow-up visit after LSG. Hair loss was defined as either an enhanced amount of hair falling out daily (effluvium) or visible hairlessness (alopecia). Normal hair loss (normal shedding) was referred to the loss of up to 100 hairs per day. Biological parameters (including vitamins B1, B12, C, A, E, and D and minerals iron, folic acid, biotin, riboflavin, zinc, and selenium) were assessed using routine techniques[11,17,18]. 25-hydroxy vitamin D was assayed with a liquid chromatography-tandem mass spectrometry method (Waters Ltd., Elstree, UK). Vitamins A and E were carried out using a high-performance liquid chromatography technique (Agilent Corporation, Santa Clara, CA, USA). Trace elements were measured using inductively coupled plasma mass spectrometry (Agilent). Other routine chemistry and hematology analyses were measured on automated platforms (Abbott Diagnostics, Maidenhead, UK; Hobira Medical, Montpellier, France respectively). The daily doses of supplements for patients younger than 45 years of age include: 8 mg of iron for men and post-menopausal women, 18 mg of iron for menstruating women, 30 µg of biotin, 11 mg of zinc for men and 8 mg of zing for women, 55 µg selenium, 400 µg of folic acid, 2.4 µg of riboflavin and vitamin B12, 1.2 mg of vitamin B1 for men and of vitamin B1 for women, 900 mcg of vitamin A for men and 700 mcg of vitamin A for women, of vitamin E, 45 mg of vitamin C, and 15 mcg of vitamin D. The only differences in the daily doses of supplements in subjects older than 45 years of age were for iron and zinc, which were prescribed at 18 and 11 mg, respectively. More details on the composition of the multivitamin supplement are given in Table 1. Patients initiated supplementation two weeks after surgery and continued for two months. Compliance with supplementation was carefully assessed by the medical follow-up team. This study obtained the ethic code EN2H11935642287TA through the Ethical Board of Erfan Niayesh Hospital.

Prevalence of micronutrient deficiencies in those younger and older than 45 years of age, with or without a prescription for supplements before surgery and at 12 months after LSG

All LSG procedures were carried out by a longitudinal resection from the angle of His to around 3-4 cm orally to the pylorus using a 36-French bougie inserted along the lesser curve. More details on surgical technique have been published previously[19].

All descriptive findings are presented as mean/median and standard deviation for quantitative variables and count and percentage for qualitative variables. After checking the normality of variables using histogram graphs and the Kolmogorov-Smirnov test, the Wilcoxon rank test was used to compare the non-parametric variables and t-test to compare other continuous variables before and after LSG. The statistical significance level was defined as 0.05 (α = 0.05). The statistical analyses were performed using IBM SPSS Statistics 25 (SPSS Inc., Chicago, IL). 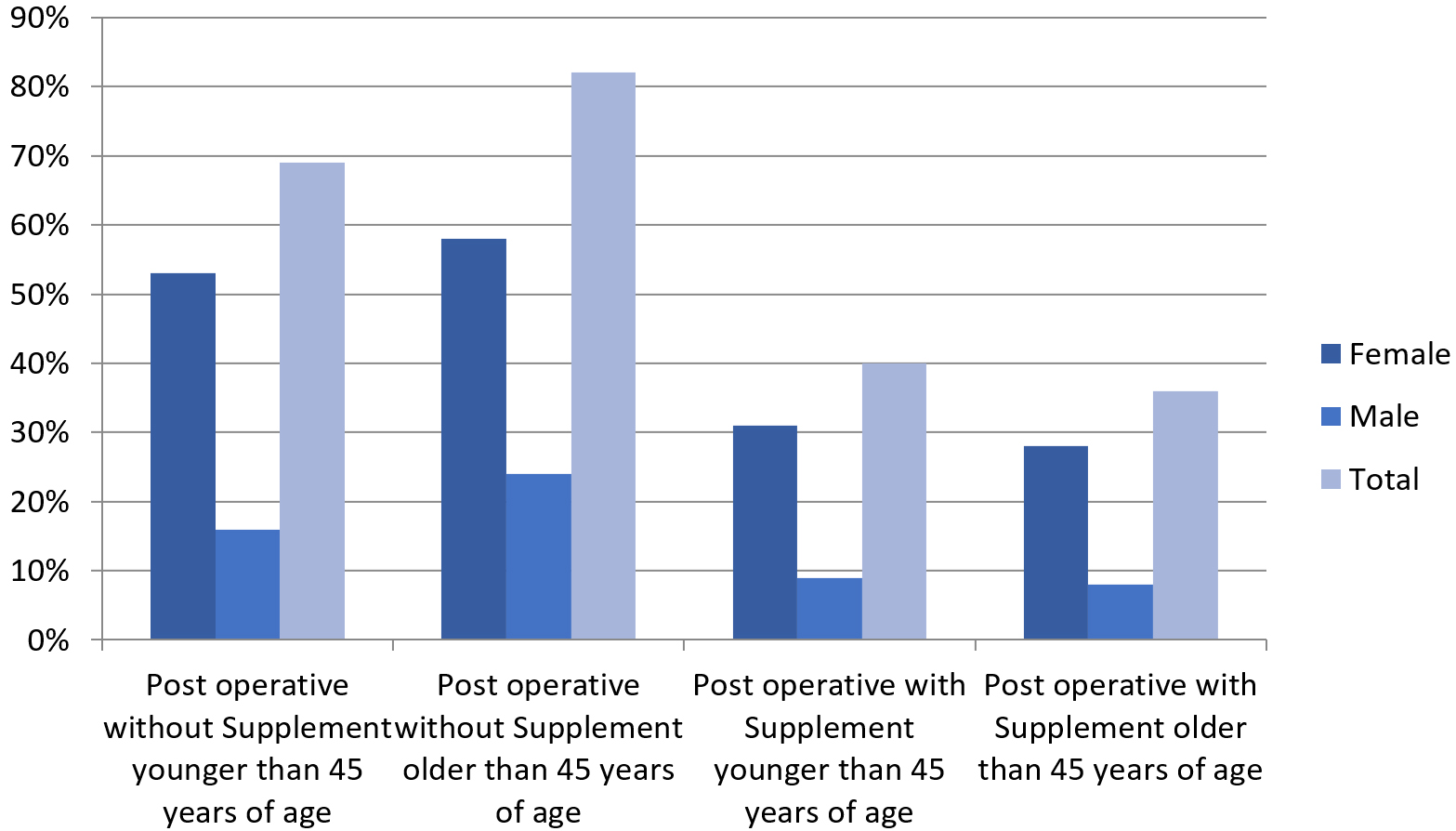 After BS, many subjects complain of symptoms suggestive of nutritional deficiencies, the most frequently reported being hair loss, cramps, and paresthesia. Postoperative symptoms do not result in severe health consequences; they cause a daily discomfort for patients. Hair loss is a common complication after bariatric surgery and is reported in more than half of the subjects in the short term after BS. Hair loss is related to rapid weight reduction; furthermore, zinc, iron, and other micronutrient deficiencies can also be involved[16,17]. There are only a few data on the treatment of these symptoms[18]. Treatment of hair loss with vitamins B5 and B6 is common after BS, whereas there are no data on the association between hair loss after BS and deficits in these vitamins[11]. This is the main reason for our study that aimed to determine the main deficiencies that underlie hair loss and their treatment with supplements after BS.

Preoperative monitoring of the combination of several nutritional deficits could be used to identify patients at risk and prevent the onset of deficiencies and their consequences after BS[26]. Identification and correction of micronutrient deficiencies was essential for treating hair loss. Our patients stated they benefited from supplements. Indeed, most patients stopped losing hair after being prescribed vitamin and mineral supplements one year after BS. As a consequence, diet counseling and adequate supplementation are required after BS to avoid hair loss. Postoperatively, all patients should receive lifelong supplementation.

In conclusion, hair loss is a frequent postoperative complication after BS in morbidly obese individuals. Based on the results, the variable addition zinc + iron might be one of the predictors of hair loss, although further research is needed to demonstrate the correlation between preoperative status of nutritional deficiency and postoperative remission in bariatric subjects. Therefore, there is global need for monitoring nutrient status in these patients. Most of these deficiencies might be preventable and treatable with high-dose supplementation. With increased awareness of the potential nutritional consequences of BS, life-threatening complications related to nutritional deficits may be avoided.

Readers can reach the data and materials through direct contact to authors’ emails.

Both authors declare that there are no conflicts of interest.

Informed consent was obtained from all individual participants included in the study. The presented study was approved by the Ethical Board of Erfan Niayesh Hospital.

Informed consent was obtained from all individual participants included in the study. The presented study was approved by the Ethical Board of Erfan Niayesh Hospital. 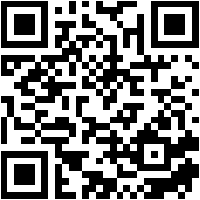