The aim of the paper is to demonstrate the practicability of retroperitoneoscopic single-site 3D left adrenalectomy after previous homolateral laparotomic renal surgery. We present a case report of a 70-year-old male who underwent radical nephrectomy in 1999. Twenty years after radical nephrectomy, the patient underwent a computed tomography scan for B-cell lymphoma follow-up, which revealed a 30 mm left adrenal mass suspicious for a delayed renal-cell carcinoma metastasis. After multidisciplinary discussion, surgery was chosen as first option. To minimize surgical morbidity as much as possible, a 3D laparoscopic single-site retroperitoneal approach was chosen. The patient had no peri- or intra-operative complications and was discharged on Postoperative Day 3. The final histological report revealed an adrenal clear cell renal-cell carcinoma metastasis. This experience shows that single-site retroperitoneal laparoscopic adrenalectomy is possible in patients who underwent previous abdominal cancer surgery and is an option to consider when determining optimal approaches for adrenal surgery.

Renal-cell carcinoma (RCC) accounts for about 2% of all cancers. Up to 30% of patients experience metastasis at diagnosis or during follow-up[1]. The most common localizations of RCC metastasis are lung, liver, bone, adrenal, brain, and nodes. Late single metastatic RCC recurrence, more than 10 years after nephrectomy, in ipsilateral or contralateral adrenal gland is a rare event reported in 3% and 0.7% of remaining kidney units, respectively[2]. In the case of single metastasis or recurrent disease, surgery can be considered as a treatment option in those patients who have a favorable risk profile and in whom complete resection is achievable[3]. The surgical approach must be chosen according to the patient’s characteristics, size of the lesion, and surgeons’ expertise[4]. Nowadays, minimally invasive surgery is the gold standard for the treatment of urological malignancies, and many techniques are being developed in order to reduce surgical morbidity as much as possible. In particular, laparoscopic adrenalectomy series in the literature show low morbidity and complication rates in addiction to short hospital stays[4]. Moreover, the retroperitoneoscopic approach and single-port approaches have shown equivalent or favorable perioperative outcomes to be a justified alternative for advanced surgeons[3-4]. We present a case report of a 70-year-old male who underwent retroperitoneoscopic single-site left adrenalectomy for adrenal RCC metastasis 20 years after laparotomic adical nephrectomy for cell renal-cell carcinoma (CRCC).

The aim of our work is to show the practicability of 3D retroperitoneoscopic single-site retroperitoneal adrenalectomy after previous homolateral renal surgery.

We present a 70-year-old Caucasian male with a history of hypertension, benign prostatic hyperplasia, and previous B-cell lymphoma with negative follow-up. In May 1999, he underwent laparotomic left RN for a CRCC of middle/lower pole of the left kidney with thrombosis of the left renal vein and peri-renal fatty tissue invasion (pT3b N0); no ipsilateral adrenalectomy was performed at that time due to surgeon’s preference. The patient was thereafter followed for 10 years according to the renal cancer European Association of Urology (EAU) guidelines[1].In May 2019, due to a lateral cervical mass, the patient underwent left lateral cervical lymph node dissection with diagnosis of stage IA G3 B-cell lymphoma and was subsequently treated with local radiation therapy. In September 2019, a CT scan performed for routine lymphoma follow-up revealed an inhomogeneous left adrenal solid expansive lesion of 30 mm × 20 mm [Figure 1]. A multi-disciplinary meeting with hematologists, oncologists, and endocrinologists was scheduled, and indication to surgery, with diagnostic and curative intent, was proposed. In consideration of the previous surgery and of the localization of the mass, a retroperitoneal approach was chosen; moreover, the retroperitoneoscopic single-site technique was considered to reduce morbidity.

In November 2019, the patient underwent left retroperitoneoscopic single-site adrenalectomy. Utilizing a left lateral decubitus position, a 2.5 cm lateral incision was made [Figure 2] at the tip of the twelfth rib, through which a single-site gel port (GelPOINT® Advanced Access Platform, Applied Medical, Rancho Santa Margarita, CA, USA) was inserted [Figure 2]. The retroperitoneal operating space was created with an air inflating balloon as previously described[5]. A standard 10 mm, 0-degree 3D laparoscopic camera [Image 1 S TM 3D (Karl Storz, Tuttlingen, Germany)] was used throughout the procedure in addition to standard and bent single-port laparoscopic 5 mm instruments. The caiman® 5 (Braun Vetcare, 78532 Tuttlingen, Germany) was used for dissection and vessel sealing. The adrenal gland was identified and bluntly isolated from the psoas, posteriorly and inferiorly from the colon. The left adrenal vein was identified, isolated, and secured using 5 mm polymer clips. The specimen was removed within a retrieval bag, and a 20-Fr drainage was placed in the lateral part of the incision [Figure 3]. 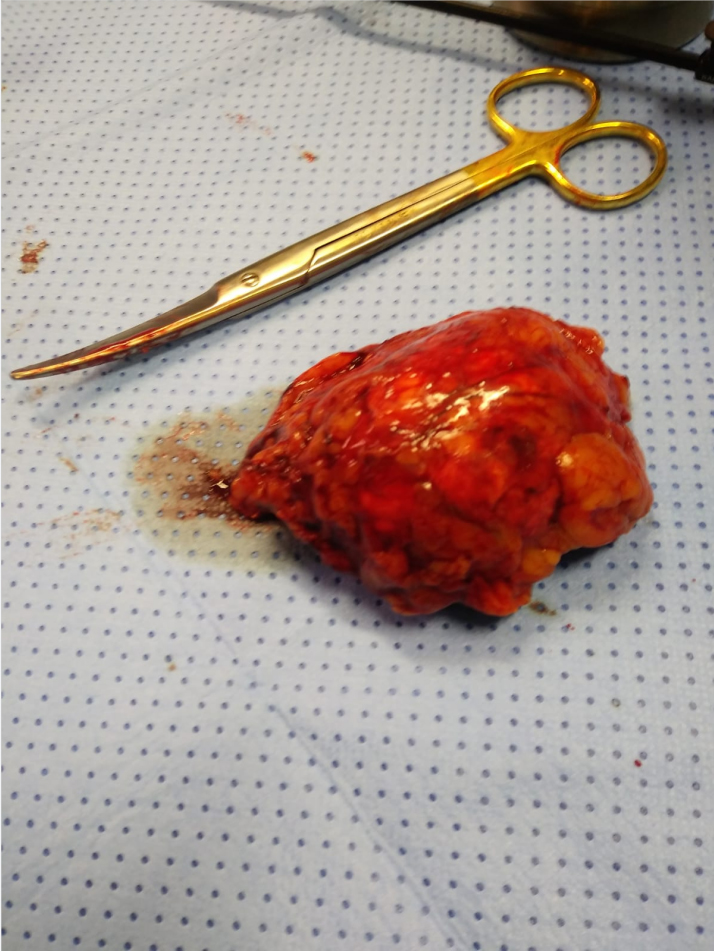 CRCC metastases occur during follow-up in about 1/3 of patients[2]. Typical locations of metastases are brain, lungs, bones, liver, and adrenals. The optimal treatment for locally recurrent RCC is still under debate, and, according to EAU guidelines, surgical treatment for recurrent disease must be offered when technically feasible, when complete resection of the mass is achievable, and in the lack of major comorbidities[1]. However, in the era of targeted molecular therapies, surgical metastasectomy, when feasible, remains the gold-standard treatment, with five-year cancer specific survival of 60%[3]. Indeed, systemic immunotherapies with interferon and interleukin-2 (IL-2), or more recent therapies with multikinase inhibitors (sorafenib, sunitinib, pazopanib, axitinib, lenvatinib, and cabozantinib), mTOR inhibitors (temsirolimus and everolimus), monoclonal antibody against the eGFR (bevacizumab), and immunomodulatory drugs (nivolumab, ipilimumab, atezolizumab, pembrolizumab, and avelumab), alone or in combination, have been shown to improve survival and oncological results with complete responses in less than 10% of patients and are burdened by frequent and occasionally severe toxicity[6]. Moreover, many studies have shown a significant increase in cancer specific survival and median overall survival in patients treated with complete metastasectomy compared with those in which surgery was incomplete or omitted[7]. In the current paper, we present a very delayed onset of adrenal CRCC metastasis, 20 years after the removal of primary tumor. We chose to avoid biopsy because of the double usefulness of surgery as diagnostic and curative intent. Favorable predictors of survival after RCC metastasis resection are: (1) diagnosis to occurrence of metastases > 1 year; (2) a unique metastatic site; and (3) age < 60 years[8]. Our patient presented with two out of three favorable characteristics. We planned to remove the adrenal mass with a single site laparoscopic retroperitoneal approach in consideration of the shape, position, and previous abdominal surgery.

Laparoscopic adrenalectomy was described for the first time in 1992 and has since become the most used approach representing the gold-standard treatment for adrenal masses due to low perioperative morbidity and low complication rates, offering reduced postoperative pain, length of stay, and recovery time[9-11]. The following minimal invasive techniques have been described to approach the adrenal gland with laparoscopy and robotics: transperitoneal or retroperitoneal via the anterior or lateral approach and single-port transperitoneal or retroperitoneal. None of these techniques however have demonstrated a clear superiority, highlighting the importance of the experience of the surgeon and center[4]. Comparable safety and outcomes have been demonstrated between transperitoneal and retroperitoneal laparoscopic approaches when performed by trained and skillful surgeons[11-15]. The same is true for single-site laparoscopic surgery, where the choices of the technique and of the approach are made by the surgeon according to his skills.

Single-site laparoscopic adrenalectomy can be comparable to the multi-port approach, as trans-peritoneal is comparable to retroperitoneal[16]. The advantages reported for single port surgery are lower blood loss, lower analgesic time, and improved cosmetic satisfaction against longer operative time. However, our operative time was lower or comparable to published results, and our perioperative outcomes, postoperative pain, length of stay, and recovery time were improved. When the diagnosis of adrenal CRCC metastasis was made, the case was discussed during the weekly multidisciplinary meeting with the oncology team, the endocrinologist, and radiotherapists, and the final indication was to continue with follow-up and not to perform immediate systemic treatments. The role of the multidisciplinary approach is pivotal in the tailored management of these patients.

Minimally invasive surgical approaches and techniques must be tailored case by case according to the facilities and skills of the surgeon and patient characteristics. In the current report, we show that single-site retroperitoneal laparoscopic adrenalectomy is a possible procedure for patients who underwent previous trans-peritoneal abdominal surgery and is an option to consider when determining optimal approaches for adrenal surgery. However, the retroperitoneoscopic single-site technique should be pursed only when it does not compromise the overall and oncological safety of the patient and the surgeon has the expertise to perform the procedure.

A written informed consent for publication was obtained. 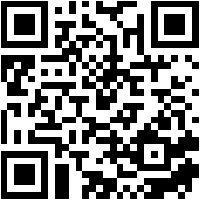