Minimally invasive surgery for gallbladder cancer at an expert center

This article belongs to the Special Issue Searching for a Better Definition of Robotic Surgery: Is It Really Different from Laparoscopy?
Views:571 | Downloads:160 | Cited:

In this article, we reviewed the techniques and outcomes of minimally invasive surgery for gallbladder cancer performed at an expert center. The techniques of laparoscopic extended cholecystectomy with the short- and long-term outcomes at our center were described. The short- and long-term survival outcomes of laparoscopic extended cholecystectomy are comparable to open surgery. Laparoscopic surgery is a safe, effective alternative for open surgery in the treatment of gallbladder cancer. The benefits of robotic surgery should be proven with further research.

The treatment of gallbladder cancer (GBC) can be variable depending on the stage of disease. A variety of operations are performed, from simple cholecystectomy performed for T1a cancers to extended right hemihepatectomy and bile duct resection performed for more advanced cancers. There are several decisions for the surgeon to make[1]. The first decision to be made is whether to proceed with surgery. The role of staging laparoscopy to aid this decision has been reported[2]. Thereafter, the operator should decide whether to perform lymphadenectomy and its extent, whether to perform a liver wedge resection or a formal hepatectomy, and whether to perform a bile duct resection or not.

In the era of minimally invasive surgery (MIS), the treatment options for the surgeon are even more complicated. Currently, open surgery, laparoscopic surgery, and robotic surgery are all being performed[3]. Therefore, it is necessary to evaluate the merits and demerits of these operation methods.

We have started a prospective study on “the laparoscopic approach for early GBC” in 2004, and have experienced a significant number of cases since. In this article, we review our history of MIS for GBC.

STEP BY STEP ADOPTION OF LAPAROSCOPIC SURGERY FOR GBC

Laparoscopic surgery for GBC was contraindicated for a long time, although cholecystectomy was the first laparoscopic surgery in the field of general surgery. With experience of MIS in various fields, we came to believe that laparoscopic surgery is beneficial for the patients in terms of less pain and rapid recovery with similar oncological outcomes. Therefore, we started a prospective study on laparoscopic surgery for early GBC in 2004. As this is the first prospective study for applying laparoscopy to malignant disease, we decided to plan the protocol to include only early GBC. Around 2010 was a time when many leading authors reported their initial experiences of advanced laparoscopy. Gumbs et al.[4] reported encouraging results of three patients who received laparoscopic extended cholecystectomy, with no morbidity or mortality. In 2010, we also reported our “initial experience of laparoscopic approach with suspected gallbladder cancer”[5]. Figure 1 shows our initial algorithm of patient care for suspected GBC. Endoscopic ultrasound was performed to determine liver invasion, and cases with liver invasion were treated with open radical cholecystectomy. In cases with peritoneal side tumors, intraoperative ultrasound was performed by experienced radiologists to rule out liver invasion. When there was no invasion, and the frozen section confirmed malignancy, laparoscopic extended cholecystectomy (which includes lymphadenectomy) was performed. Three trocars were used in the standard way for cholecystectomy. A thin layer of liver tissue was removed with the gallbladder to avoid bile spillage and to secure a safe margin. When frozen section confirmed malignancy, one or two trocars were additionally inserted for lymphadenectomy, and the pericholedochal, hilar, periportal, and common hepatic nodes were routinely dissected. Figure 2 shows the completion of lymphadenectomy. 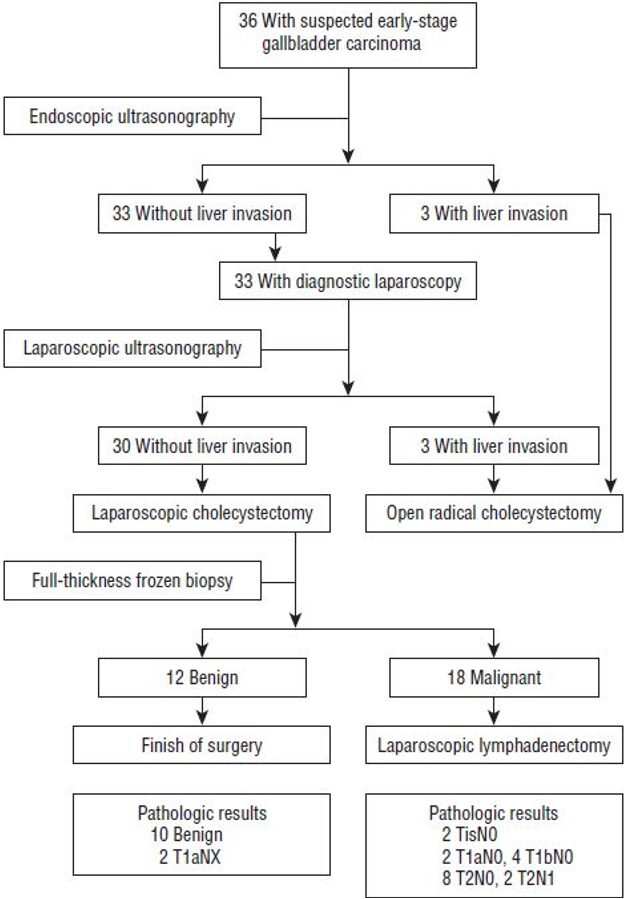 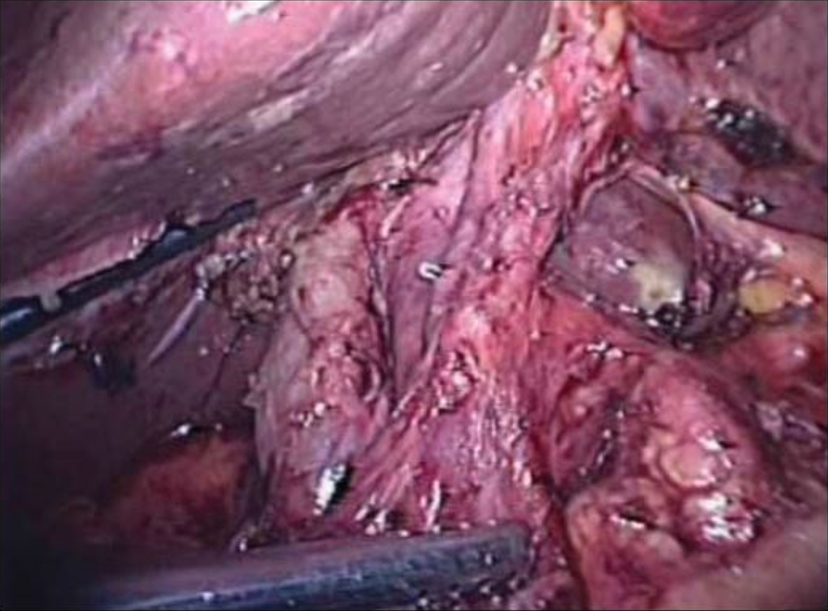 After confirming the oncologic safety, laparoscopic surgery has been cautiously applied to GBC with liver invasion. To demonstrate this technique, we published a case report as a video article[6]. Laparoscopic cholecystectomy with en bloc resection of the liver bed was performed, followed by regional lymphadenectomy. Ultrasonic shears were used to dissect the superficial liver parenchyma, and Cavitron Ultrasonic Surgical Aspirator was used to dissect the deeper parenchyma. The report has shown that laparoscopic lymphadenectomy and liver resection can be safely performed. With encouraging advances in surgical technique, we can move forward to extended cholecystectomy with liver wedge resection.

Additionally, when dividing small vessels, we prefer using a vessel sealing energy device rather than applying hemoclips. This technique shortens the operation time and can provide a cleaner operative field.

In 2015, we published our long-term outcomes after laparoscopic approach for early GBC[8]. During a ten-year period, 83 patients with suspected early GBC were enrolled in our prospective laparoscopic surgery protocol. Among these 83 patients, 45 patients had a pathologic diagnosis of GBC. The pathologic characteristics of the 45 patients are shown in Table 1. After a median follow-up period of 60 months for 45 patients, the overall survival rate was 90.7%, and the disease-specific 5-year survival rate was 94.2% [Figure 3]. There were no cases with local recurrence at the lymphadenectomy site or the gallbladder bed. From these results, we concluded that MIS for GBC is an oncologically safe operation. 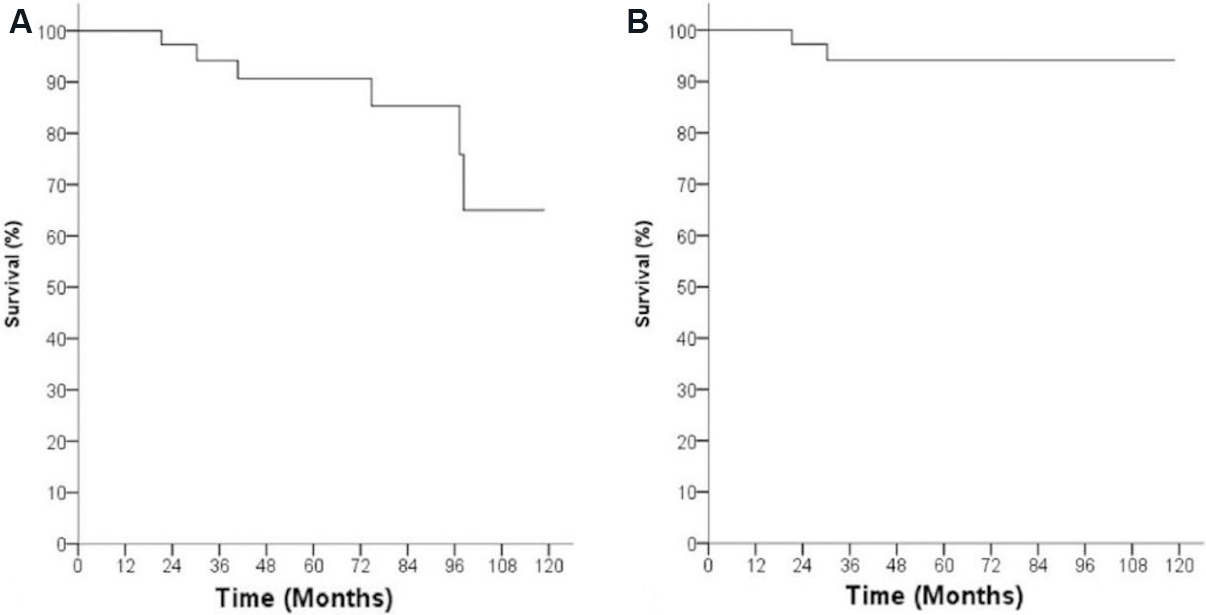 After accumulating 13 years of experience of laparoscopic extended cholecystectomy, we analyzed the oncologic outcomes of open vs. laparoscopic surgery for T2 GBC[9]. During the period of 2004 to 2017, 247 patients with GBC were treated were at our hospital. Among these patients, 151 patients had T2 cancer. After exclusion, a total of 99 patients were analyzed. The types of operations performed on the open surgery (OS) group and the laparoscopic surgery (LS) group are shown in Table 2. The OS group had more liver wedge resections than the LS group. The overall survival rates of the two groups are shown in Figure 4; there was no statistical difference between the two groups in overall survival rate. The entire group was subdivided into T2N0 group and T2N1 group to compare the overall survival according to nodal status. There was no significant difference between the OS group and LS group, in both the T2N0 subgroup and T2N1 subgroup. This outcomes show that laparoscopic surgery is compatible with open surgery even in T2 stage GBC. 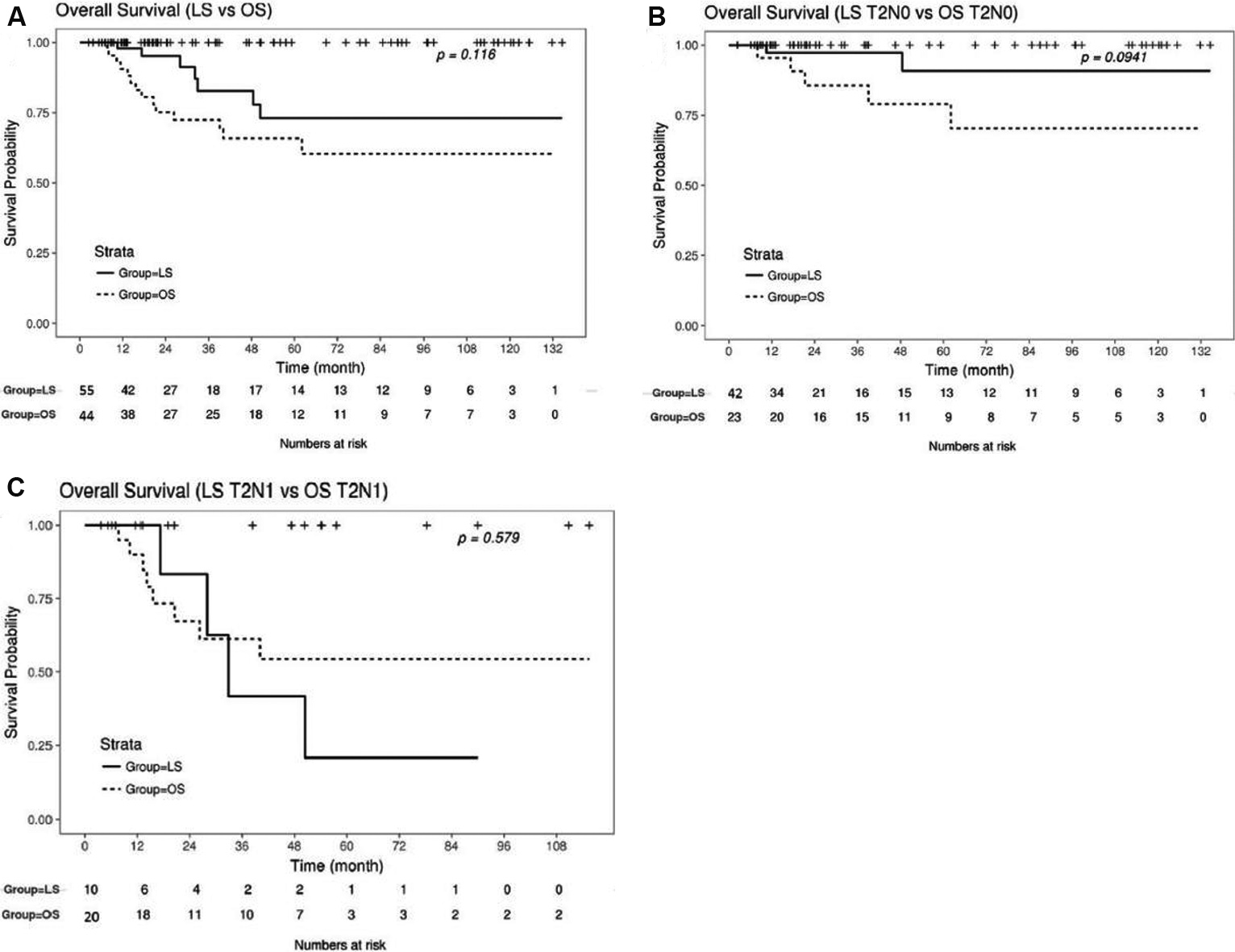 For more advanced lesions, such as more than T3, further comparative studies are necessary to evaluate the oncologic safety of the laparoscopic approach.

The results of perioperative outcomes and survival outcomes in this review are shown in Tables 3 and 4, respectively.

PERSPECTIVES OF MIS INCLUDING ROBOTIC SURGERY

The advent of robotic surgery was another milestone in the history of surgery. Although many surgeons have readily acknowledged this technique, the benefits are still a matter of debate. Advocates maintain that robotic surgery is superior, due to the fine and precise movements and magnified 3D vision. Others are concerned about the loss of tactile feedback, limited array of instruments, and the cost issue. But even with this debate, many surgeons have already reported huge experiences in robotic

When performing robotic pancreaticoduodenectomy, there is a definite benefit in facilitating anastomosis with higher degree of freedom. When pancreaticojejunostomy is performed by laparoscopy, there is limited freedom of instrument motion, and the needle holder manipulation is difficult. In contrast, when pancreaticojejunostomy is performed by the robot-assisted method, suturing can be performed almost the same as in open surgery, without any limitation of movement.

There have been several early reports of robotic surgery for GBC[3,18,19]. In 2020, Belli et al.[20] reported their experience on robotic surgery for 8 patients with GBC, with a mean operative time of 147 minutes and a 0% conversion rate. However, some issues need to be addressed. Surgery of GBC ranges from relatively simple cholecystectomy and lymphadenectomy to liver resection and bile duct resection. Early GBC may only require cholecystectomy with or without lymphadenectomy. Advanced cases may require extensive surgery with liver resection, and/or bile duct resection. If the operation is complicated, either laparoscopy and robot-assisted surgery can be chosen depending on each surgeon’s preference. But in relatively simple surgery, the issue of cost-effectiveness matters.

Due to the monopoly of Da Vinci robotics, the cost of robotic surgery is still high. Many patients in Korea do not have insurance coverages for robotic surgery, forcing them to pay the high cost of robotic surgery out-of-pocket. For pancreas and liver surgery, the operative type is planned preoperatively. In contrast, in the treatment of GBC, the decision to proceed with a radical operation is often decided according to the results of the intraoperative frozen section pathology. Therefore, routine use of robots for any stage of GBC can be too expensive. Another demerit of robot-assisted surgery is the lack of proper instruments. When liver resection is required, parenchymal transection may be difficult, as there is no cavitron ultrasonic surgical aspirator in robotic surgery. Harmonic scalpel is frequently used as well for parenchymal transection in liver surgery. However, a robotic harmonic scalpel with endo-wrist movement has yet to be developed, diminishing the advantage of robotic surgery. In many cases of GBC, lymphadenectomy can be the only necessary procedure for an extended cholecystectomy. This procedure can be performed superbly with laparoscopic surgery. The benefits of choosing the robotic system for just the lymphadenectomy are questionable.

Breakthrough innovations in the field of surgery are constantly happening. We are currently debating the pros and cons of laparoscopic and robotic surgery, but as is outlined in this editorial by professor artificial intelligence surgery is already here, albeit in limited ways. Refusing to accept new methods without any reason would slow down these advances in the field of surgery. But we must be critical in appraising the feasibility and safety of new methods, so that core values such as patient safety, oncologic feasibility, and cost-effectiveness are ensured. Perhaps with future developments of cheaper robotic systems with better surgical techniques, the benefit of robotic surgery may be shown later. But to date, there is insufficient evidence of benefit of the robotic system over laparoscopic surgery, in terms of extended cholecystectomy.

Laparoscopic surgery is a safe, effective alternative for open surgery in the treatment of gallbladder cancer. The benefits of robotic surgery should be proven with further research.

Made substantial contributions to conception and design of the study, editing, and administrative support: Han HS 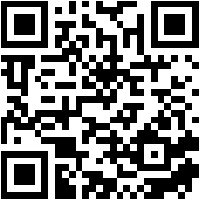